This year marks the centenary since the murder of the Russian imperial family in Ekaterinburg during the night of 16-17 July 1918. The subject of several films and books, the centenary commemorates the Tsar, Nicholas II, his wife the Empress Alexandra, and their five children – along with their doctor and three servants – who were gunned down or brutally bayoneted in the cellar of the “House of Special Purpose” in which they had been imprisoned by the Bolsheviks who were to win control of Russia after a bloody civil war. Even one hundred years later it remains an act of appalling butchery – yet one that was to be unhappily characteristic of the newly emerging Communist regime.

Professor Dominic Lieven’s book was published in 1993, after the collapse of the Soviet Union yet before the advent of Vladimir Putin. Unlike many other biographies it does not concentrate exclusively on the domestic life of the Tsar and his family. The author places Nicholas II in the wider context of the development of autocracy in Russia and the country’s peculiar history: this was hugely expansionist under the Romanov dynasty which ruled for 300 years (until Nicholas’s abdication in 1917) encompassing an enormous half-European, half-Asiatic land mass.

Lieven writes drily that “Modern liberalism and democracy had few roots in ancient Muscovite soil.” He describes the way the country was governed as a form of “gangster politics”: autocratic rule by the Tsar, with the help of a small group of ancient aristocratic families who were given absolute control of their estates and serfs in return for their total loyalty to the imperial family. The unity and ruthlessness this provided combined to create an uneasy coexistence between nobles, peasants, the Orthodox Church and the increasing urban population. 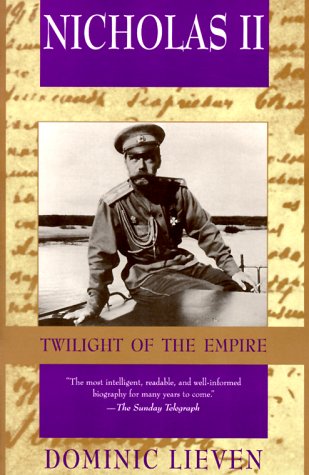 By the mid-19th century, Russia faced two problems that were essentially insoluble: if the empire were to survive as a great power it had to modernise rapidly to compete with the new urban world exemplified by England’s Industrial Revolution. Yet inevitably, such rapid modernisation would immediately challenge the existence of the Romanov dynasty and the country’s domestic stability. As Lieven observes, “monarchy” is an intrinsically conservative institution, incapable of instigating real change. The Tsars reflected this: Orthodoxy, autocracy and nationality were the responses of Nicholas I (1825-1855) to “liberty, equality, fraternity”. Nicholas II, his great-grandson, felt exactly the same.

By the late 19th century, compared with other European countries Russia had an impoverished army (already humiliated by the disastrous Crimean War), a whole class of underpaid teachers, an enormous disparity between the wealth of the few and the poverty of the many and was extremely difficult to tax effectively, given its size. The Tsar, born to rule as well as to reign, though served by capable, disinterested and energetic men, notably Sergei Witte and Peter Stolypin, his two most able prime ministers, faced an impossible burden which, unlike them, he was destined to bear for life.

This is the background to the reign of Nicholas II. Lieven is critical of the Tsar’s character, but sympathetic to the insurmountable obstacles he faced. His father’s sudden death in 1894 thrust him too young into a role for which he was unprepared. An intelligent man who had read widely in history, who spoke four languages and who had an excellent memory, Nicholas still lacked the essential qualities needed to be an effective ruler: reserved, self-controlled and suspicious of political cabals, he did not know how to make friends outside his immediate family circle, so had no group of chosen and trusted ministers to rely on; he was cleverer than Alexander III, yet lacked his father’s qualities of leadership, sound judgment and his support for the ministers he had appointed; he was both autocratic yet indecisive, apt to change his mind without telling the minister responsible, and ignoring everything but defence, foreign policy and the ministry of internal affairs.

Pobedonotsev, the chief civil administrator of the Orthodox Church, complained that the Tsar lacked “strength, energy and passion.” By 1905 many top officials believed that without fundamental change, “the regime was doomed.” Though he was the ruler of 150 million people, the Tsar, incredibly, had no private secretary and there was no coordination between the different ministries. He was simply unable to manage his government effectively “but was in a position to stop anyone else from attempting to do the job for him.”

Kind, sensitive and generous (one of his ministers remarked he would give away the last shirt on his back), a devoted family man and loving father as well as a devout Orthodox Christian, he was deeply sincere in seeing himself as “the father of his people” – rejecting the cynicism of some of his ministers who saw the serfs as “semi savages without human values and aspirations.” His coronation as Tsar, Lieven thinks, was the most sacred moment of his life, consecrating him to his country for life. Modest and unfailingly courteous, he would have been content to have been a country gentleman, engaging in traditional outdoor pursuits, for which he had a passion. Indeed, this is what he had briefly hoped after his abdication; but George V, his cousin, to whom Nicholas had made overtures of asylum, refused, to his great shame, to throw the imperial family a lifeline and thus effectively sealed their eventual fate.

Lieven also mentions the role played by the Empress, describing Alexandra as highly-strung, very serious, deeply religious, shy, unsociable and quite unable to conform to the expectations of her role within the gossipy and hedonistic St Petersburg high society. The tragedy of their son’s haemophilia, which Nicholas and Alexandra kept secret from the world at large, including the Russian government, contributed to their isolation and stress. The role played by the notorious and disreputable monk Rasputin is not exaggerated in Lieven’s book; nonetheless, his incomprehensible friendship with the imperial family only increased Alexandra’s unpopularity in the country.

When imprisoned by the Bolsheviks in Ekaterinburg it was noted that the Tsar and Tsarina never once complained of the humiliating way they were treated; dignified, unworldly and imbued with a sense of religious fatalism, they preserved their exceptionally close and united family to the end. In 1981 the Russian Orthodox Church Abroad beatified the whole family and their servants as martyrs and “passion bearers” (those who face death in a Christ-like manner).

Reading this scholarly, balanced and informative account one cannot help thinking – with the hindsight of history – that the Romanov dynasty’s tragic conclusion was unavoidable. Once war broke out in 1914 it played a huge role in ending the monarchy and the eventual triumph of Bolshevism. Revolutionary and anarchist groups had been had been fermenting in Russia for over half a century; but war gave Lenin, the leader of the Bolsheviks, his opportunity. As Lieven comments, Lenin was a rare example of a leader “who wished war on his own people” and the revolutionaries’ “cold-blooded rationalisation of class terror carried the world into a new dimension of political crime.” The Tsar and his family were the first of millions of Russians to die violently in the ensuing decades – a sad outcome for the last Emperor, who deeply loved his country “not wisely but too well.”

Francis Phillips writes from Bukinghamshire in the UK.