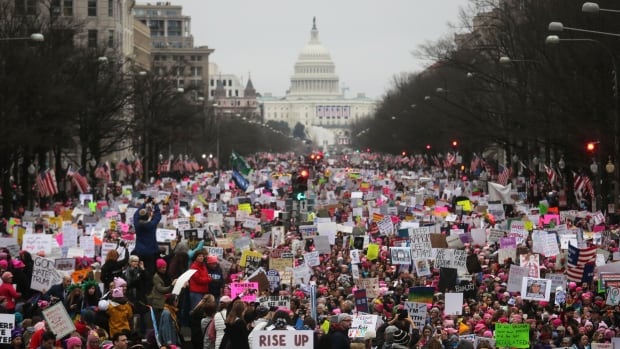 Women’s March on Washington on Saturday

In the American media fact-checking has evolved from a fad to an obsession, mostly in response to Donald Trump. It reached its zenith in the last few days with a Donnybrook between the White House and media outlets over the comparative size of the crowds at Obama’s inauguration in 2008, Trump’s last Friday, and the Women’s March on the weekend.

Journalists are complaining about Trump’s unprecedented disregard for the truth, a conviction which increases every time the Washington Post gives one of his speeches a five Pinocchios. The WaPo fact-checkers,  Glenn Kessler and Michelle Ye Hee Lee, were scathing in their analysis of his inaugural address, which presented, they said, “a portrait of the United States that often was at variance with reality”.

How would WaPo have fact-checked the Gettysburg Address?

Four score and seven years ago

This bit of Biblical circumlocution locates the date of the creation of the United States of America at July 4, 1776. However, this was merely the date of a declaration of independence. The ensuing war lasted until September 3, 1783, when the United Kingdom and America signed the Treaty of Paris – 79 years ago, not 87 years ago.

This is a patriarchal statement which overlooks the contributions of women during the American Revolution and thereafter. What about Martha Washington? Deborah Samson? Abigail Adams? Mercy Otis Warren? Margaret Corbin? Ignored completely. Lincoln has made no effort whatsoever to be inclusive. Not one woman sits in his cabinet.

brought forth on this continent,

This give not-so-subtle support to the chauvinistic notion of Manifest Destiny, that America should stretch from “sea to shining sea”. Lincoln fails to mention that the blood of countless Mexicans and Native Americans was spilt to achieve this ultra-nationalistic goal. Furthermore, the United States occupies, in any geography book, much less than half of the continent of North America. He has deliberately ignored Mexico and Canada and the Russian territory of Alaska.

a new nation, conceived in Liberty, and dedicated to the proposition that all men are created equal.

Of all of the fact-free assertions in this speech, this is clearly the worst. The Constitution, in fact, enshrined slavery as an integral part of the American political system. Lincoln knew this, and has spoken about this extensively, but continues to parrot the nationalistic line that our nation was founded on equality. With an election looming next year, he is obviously pandering to Northern voters

Now we are engaged in a great civil war, testing whether that nation, or any nation so conceived and so dedicated, can long endure. We are met on a great battle-field of that war. We have come to dedicate a portion of that field, as a final resting place for those who here gave their lives that that nation might live. It is altogether fitting and proper that we should do this.

This obscures the outrageous fact that if American soldiers fell in rebel gray, they were buried apart in mass graves, unmarked and unmourned. President Lincoln has talked the good talk of inclusivity, but he failed to walk it.

“Dedicate”, “hallow” and “consecrate” are Christian concepts to which Mr Lincoln returns again and again in his oratory. But according to recent surveys, only 30% of Americans attended a church service in the month of June 1863. America can hardly be said to be a Christian nation. In any case, to frame a eulogy within Christian concepts excludes Jews, Muslims, devotees of Native American religions and atheists.

The world will little note, nor long remember what we say here, but it can never forget what they did here.

This is patently false. Surveys of school leavers have found that only 34.2% know who George III was and only 9% know who Millard Fillmore was. Can they forget? Yes they can.

It is for us the living, rather, to be dedicated here to the unfinished work which they who fought here have thus far so nobly advanced. It is rather for us to be here dedicated to the great task remaining before us — that from these honored dead we take increased devotion to that cause for which they gave the last full measure of devotion — that we here highly resolve …

Given that exit surveys of the the audience, who listened rapt in admiration to Edward Everett for two whole hours, showed that 58.2% of those present were dismissive of the President’s two-minute contribution, it can hardly be said that “we here highly resolve”, which, in any case, is syntactically incoherent.

that these dead shall not have died in vain — that this nation, under God, shall have a new birth of freedom — and that government of the people, by the people, for the people, shall not perish from the earth.

This is another attempt by the President to cement his candidacy for next year’s election. In fact, a President who won only 39.8% of the popular vote can hardly be deemed a legitimate representative of the people. Lincoln’s supporters have argued that he won in a canter with 180 of 303 electoral votes — far more than the 152 he needed. But in fact, this is just a quirk of an antiquated electoral system which some experts believe should be abolished. It certainly undermines Mr Lincoln’s claim to lead “a government of the people”.

While Trump and his team should be held to account for lies, fibs, misrepresentations and exaggerations, journalists should remember that he won the election even though he was continually being called out for his “Pinocchios”.

Perhaps because the journalists are foxes and President Trump is a hedgehog. According to the ancient Greek poet Archilochus: “The fox knows many things, but the hedgehog knows one big thing.” The journalists know lots of facts, but Trump knows what the electorate wants. Why don’t they spend more time fact-checking that?