Most of the Earth’s surface is covered in water – 71 percent of it to be exact.  Currently we use very little of that to live on, but floating cities might be the next big thing.  Human ingenuity and adaptability mean that new technology is constantly providing solutions to real or perceived challenges. Floating cities pay no rent to landlords and, situated on the water as they are, can desalinate and recirculate water in many useful and non-polluting ways.

Architect, Koen Olthuis, calls himself an ‘aquatect’, an architect who uses water to help improve the design of a city.  He has created over 100 floating houses in the Netherlands in the past 12 years, ranging from apartments to luxury villas.  However, his real passion lies in making a difference for people living in poorer countries.  He believes that anything you can build on land, you can build on the water.  His floating island design in Dubai is built on foam and concrete platforms with damping and mooring systems underneath.  He established the Social Enterprise, Floating City Apps, in 2013 together with fellow architect Menno van der Marel.  Its goal is to upgrade the living conditions of waterfront slums. They see the potential for floating hospitals, schools and other such amenities which can drift in and out of cities as and where needed, and quickly adapt to change.

One of the more interesting floating structures currently in use is the Makoko Floating School which was built for the water community of Makoko in Nigeria by Nigerian architect Kunle Adeyemi.  Recycled empty plastic barrels were used for the building’s flotation system. The 10 metre high A frame platform can safely support up to one hundred adults, even in extreme weather conditions. The building has been designed to be invulnerable to flooding and storm surges, and is designed to use renewable energy, to recycle organic waste, and to harvest rainwater.  It is intended as an easy-to-build, low-cost, sustainable prototype for a floating building that could be used for many other purposes. 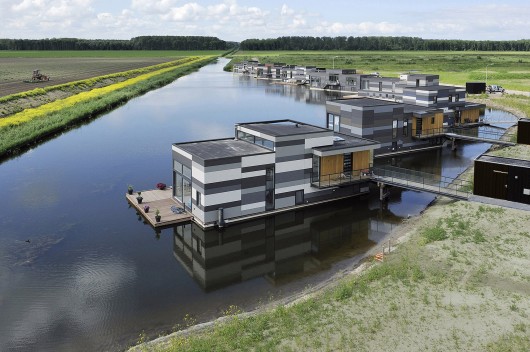 An example of everyday houses being built on water is Drijf in Lelystad in the Netherlands.  It is a collective partnership of eight families who commissioned architect Attika Architekten to design eight different but matching floating homes in an existing ditch in Urk, which is 4.8 metres below sea level. The houses are constructed in timberframe on concrete caissons, and were towed over water to their final destination.  Connected by bridges to the land, their outlook onto the water is peaceful and relaxing.

Will such pioneering ‘aquatecture’ see us utilising the water more in the future?  They certainly confirm the possibility.