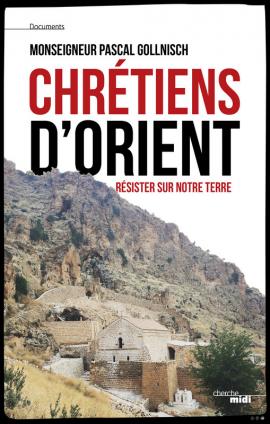 The following review is the first of a series originally published in the Journal of the Oasis Foundation. The six books selected highlight aspects of aspects of Christianity and Islamic history and culture in the Middle East and their bearing on the situation in the region today.

Oasis was founded in 2004 in Venice to encourage mutual understanding and opportunities for encounter between the Western world and the Muslim majority world. According to Oasis, “interreligious dialogue involves intercultural dialogue because religious experience is always lived and expressed through the medium of culture: not merely at the theological and spiritual level, but also at the political, economic, and social ones.”

“By talking and talking about these suffering people, we risk making them an abstraction.” This profoundly true observation is by Monsignor Pascal Gollnisch, who since 2010 has been the general director of the Œuvre d’Orient, an important charity supporting Eastern Christians. The Œuvre was born in France in 1856 and today it promotes more than 1,000 projects in the whole region.

As a counterbalance to the risk of abstraction, this short book “seeks to be more of a testament and a personal reflection than an expert analysis” (p. 9). It is a testimony, however, that counts on thousands of kilometres clocked up in the Middle East, since the author’s years of seminary training, and an uninterrupted series of meetings with Church leaders and politicians as well as with many ordinary people, like the refugees from Iraqi Kurdistan, whose dramatic stories open the book.

As is well known, the history of eastern churches is complex: there are seven Catholic rites in the region, not to mention the other confessions. Compared to many superficial explanations circulating in the media, the first part of the volume clearly explains the root of the divisions that brought about these churches and the main points of the theological debate, while a useful appendix provides a brief profile of each eastern catholic church, with their reference in France.

My only reservation about the book concerns the way the author distances himself from “later waves of European missionaries sent by the Latin Church of Rome” (p. 26) and from a West that was “conquering and Latin” (p. 21). While the reasons for this criticism are perfectly understandable, it is fair to remind ourselves that if the theological and liturgical heritage of these churches has not been lost, it is owed also to the work of many Latin missionaries who over the centuries have generously dedicated themselves in the service of these communities.

The author emphasizes the basic choice of Eastern Christians in favour of non-violence, especially in the ongoing conflicts, and the radical objection this option raises against the logic of power and hegemony that are bringing Middle Eastern societies to the brink of collapse. And here the author, to escape any shadow of intellectualism, recalls some recent instances of martyrdom, including the attack on the Syriac Catholic cathedral of Baghdad in 2010, a sinister omen of what would take place in Iraq soon thereafter.

This is not to say that Eastern Christian communities have no right to defend themselves when they are threatened with extermination. The testimony given by Monsignor Hindo, the Syriac Catholic Archbishop of Al-Hasakah and Nusaybin, illustrates how precarious the situation is in the Christian villages of northeastern Syria, caught between the threat of ISIS, the ambitions of the Kurdish militias and the substantial disinterest of the Syrian regime, which, like the international community, until recently had priorities other than the control of these peripheral regions.

The author openly calls for international military intervention to save what can be saved. He is nonetheless well aware that the true solution will consist in offering credible prospects to the Sunni community, in Iraq as well as in Syria, and in the promotion of a culture of rights.

Thus distancing himself from many of his Eastern friends, Gollnisch is in fact convinced that the great liberal principles (separation of powers, the rule of law, and a form of separation between religion and politics, whatever it is called) have something to say to these countries and their majority-Muslim societies. Indeed, they have already begun to exert a certain attraction on them, says Gollnisch: “If I strongly believe that coexistence is possible […] it is because it seems like a sizeable portion of the Middle East’s Muslim population does not want to hear about Daesh or al-Qaida” (p. 136).

But alongside the Eastern Christians the book has a second focal point: we Europeans. “It would be tragic to believe for a second that the fate of the Middle East is not directly linked to ours.” (p. 19) The stakes are crucial: demonstrating that Christians and Muslims can still live together. If they cannot manage to do so in the Middle East, where they share the same language and the same culture, how could they in the West? Yet this dimension of the problem is rarely considered.

“France – though the question could be applied, in varying degrees, to other European countries – has an unhealthy relationship with religions. So long as it refuses to grant them a legitimate place in the context of citizenship, it will remain unable to understand these populations who flock towards us and who question our societies” (p. 116).

Acting, today not tomorrow, so that the experience of religious pluralism in the Middle East does not get completely erased, means building a better future for our European societies too. This requires maintaining channels of dialogue and at the same time preserving the links between the diaspora and the original communities.

Martino Diez is the scientific director of the Oasis International Foundation and the author of many books. He has a PhD in Oriental Studies and is a lecturer in Arabic Language at the Catholic University of Milan. This review is republished with permission from Oasis.

Martino Diez is scientific director of the Oasis International Foundation and researcher in Arabic Language and Literature at the Catholic University of Milan. After graduating in Oriental Languages and... More by Martino Diez