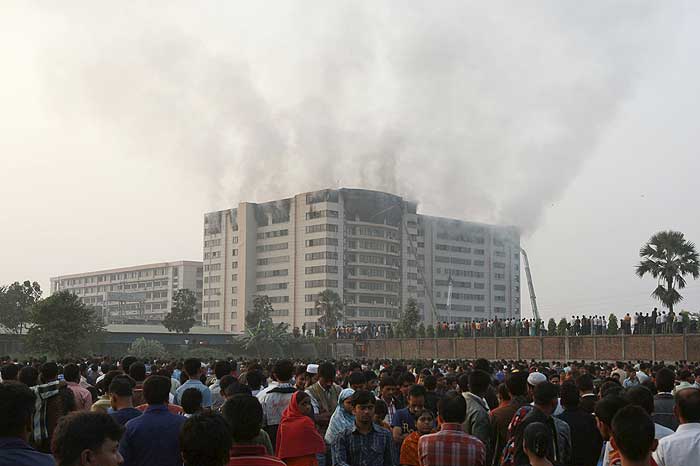 Smoke rises from a garment factory on fire near Dhaka, Bangladesh.

People who spend much of their time trying to make sense of political
violence and international conflict inevitably need some light relief
and one of my pastimes is ringing on church-tower bells. Bell-ringers
are an idiosyncratic lot and by no means all of them are worshippers at
the churches where they ring. At the same time, their long-established
and complex craft takes them into churches as frequently as the most fervent of theists.

Like most ringers I have a “home tower”, at Almondbury near
Huddersfield in west Yorkshire. But I have rung the bells at most of
the church towers around this beautiful part of northern England – and
found that, even in bell-ringing, there is no escape.

Huddersfield
and the surrounding small towns and villages were part of the intensive
industrialisation of the trans-Pennine region in the 18th and 19th
centuries.  For the area around Huddersfield it was primarily the
weaving of woollen cloth, whereas a few miles to the southeast became one of Britain’s most intensive coal-mining districts.

The
churchyards often contain stark reminders of the human costs of
industrialisation, and this part of Yorkshire is no exception. In St
John’s church at Kirkheaton
there is a memorial to the victims of a fire in January 1818 at
Atkinson’s Mill at nearby Colne Bridge. Many of the workers here, as in
many other mills, were young girls. When the fire started
one evening, the overseer had apparently gone home to bed, locking the
mill with the children inside to get on with their work. Eighteen girls
were burned to death; they included three 9-year-olds.

A few miles away, down towards Barnsley in south Yorkshire is the village of Silkstone with, at its centre, All Saints’ church. In the churchyard there, you will find another memorial.

This
marks an event in July 1838, twenty years after the Colne Bridge fire. A
sudden summer thunderstorm had released a flash-flood which overflowed a
stream and poured into a local coal-mine, the Huskar Pit. The mine-owner, as was then also common, employed scores of young children to work underground. Many were caught
by the flood, and drowned. The twenty-six killed were sixteen boys and
ten girls. Most were aged under 12; the youngest, James Burkinshaw, was
only 7 years old.

Those days are past for countries such as Britain, although the factory acts and all the other transformative legislation
of the Victorian era took decades to have their effect. Yet in a very
real sense, these tragedies are far from a thing of the past – they
have, instead, been exported.

On 14 December 2010, the ninth and
tenth floors of a crowded multi-storey clothing factory near Dhaka in
Bangladesh caught fire. As many as 10,000 people are reported to work
there, making goods for export under contract to leading western companies for sale in high-street stores in Britain and elsewhere in western Europe. As the Dhaka
fire spread, many were trapped on the top floor: at least twenty-seven
died and over a hundred were injured. Some fell to their death trying to
escape the fire, because (as survivors reported)
the owners routinely locked the factory doors and thus left desperate
workers with no option but to jump or try in vain to clamber down a
makeshift rope.

For Bangladesh and many other global-south countries, an intense focus on industries (such as textiles) that deliver cheap products to the world market has boosted economic growth. But if western consumers benefit, the real cost is met by low-paid workers trapped in unsafe conditions. Some campaigners work hard to counter
this exploitation and a few trades-unions have an honourable record of
assistance; but for the most part western customers are satisfied with
the status quo – just as their middle-class predecessors were in early
19th-century Britain.

A day after the latest Bangladesh fire, on 15 December, a boat carrying up to a hundred people was wrecked on the shores of the Australian territory
of Christmas Island. The passengers were heading for Australia to seek
asylum there; many had escaped from the violence in Iraq. A week later,
over forty had been rescued and thirty bodies recovered; at least
eighteen, and possibly thirty, are still missing. Among these are six members of an extended family from Al-Diwaniyah in Iraq, including two children.

Christmas Islanders did what they could to rescue people and there was a feeling of shock across Australia. There were also calls from across the political spectrum to toughen the country’s immigration regulations, and adopt a much more aggressive policy towards people-smugglers.

Australia
is far from alone in already taking a hard line on illegal immigration,
and it came in for international criticism in the wake
of the Christmas Island tragedy. Yet most reports still omitted the
reasons that so many Iraqis were among those trying to escape their
country.

In seven years of war and occupation since 2003, over 100,000 Iraqis have been killed and several times that number injured; 4 million Iraqis are also displaced
by the violence and fear, many of whom seek refuge beyond the region.
In Britain, the United States and the other countries that fought the
war, most doors have been firmly shut and bolted. This has led many
Iraqis (as well as others) to risk the long and perilous journey to Australia in hope that they can land on some quiet stretch of its long coastline.

There
is a clear and direct connection between the disasters recorded in
those Yorkshire churchyards almost 200 years ago and the events of
December 2010 in Bangladesh and the Indian Ocean. It is also a
disturbing one.

In Britain, most people tend to regard with a
certain disdain the privileged of the early 19th-century – merchants,
manufacturers and their dependants – whose prosperous and comfortable
lives were built on the backs of children in their mines and mills.

But turn the periscope round, and there is a nagging thought: that people a century from now will look back in amazement and scorn
that a transnational elite of over a billion people – barely 20% of the
world’s population, yet who own around 90% of the world’s wealth –
could live their comfortable lives at the expense of the grinding work and everyday dangers of so many others.

This article has been republished from openDemocracy.net under a Creative Commons licence. Paul Rogers is professor in the department of peace studies at Bradford University. He has been writing a weekly column on global security on openDemocracy since 26 September 2001, and writes an international-security monthly briefing for the Oxford Research Group.