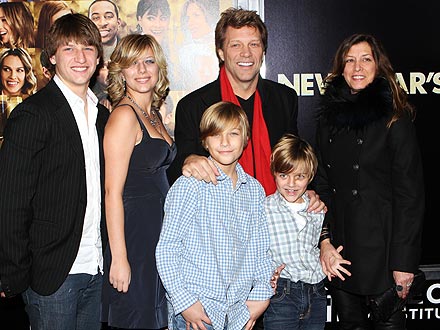 Having recently celebrated a milestone 25th anniversary of marriage with my husband, I find that stories like this tend to catch the eye and gladden the heart.

The namesake frontman of [rock group] Bon Jovi has been married to his high school sweetheart, Dorothea, since they wed … in 1989. Jon and Dorothea had been on and off as a couple for a decade prior to that. But, aside from a brief pre-marital dalliance with actress Diane Lane, the rocker hasn’t been publicly linked to any other sweeties besides his first crush.

Given the serial divorce track record of celebrity folk in general (where else would one see the ghastly term “Starter Marriage”?), it’s at once refreshing and inspiring to witness marital longevity in that quarter. Not only this, but Mr. and Mrs. Bon Jovi have much more than a “starter” family. They have a numerically-impressive (by post-modern standards) four children, ages 18 to 7.

Admittedly, Jon Bon Jovi might not be my idea of a model husband—in the OMG interview, he remarks: “The only thing I like more than my wife is my money” (I hope he’s joking), but I give credit where credit is due. And after 23 years of marriage, Bon Jovi certainly knows the value of a stable, committed relationship and family life.

Unlike so many of his peers… Bon Jovi has never seemed remotely likely to succumb to drugs or the other usual deadly tropes of rock success. He’s said… “without my wife and kids, I’d be a dead man,”

Of the great stresses of business—both the ‘show’ variety and managing the financial rewards thereof—he muses:

“I remember the burnout. It was terrible. I went from being a 25-year-old kid in a rock band to head of a corporation. Suddenly, I was the boss employing a lot of people and had to make decisions which affected lives. I wasn’t prepared for that… I felt like jumping out of the moving car and I’d have been killed. I’m NOT exaggerating… (But) God blessed me. I had a wife who loved me and a family to go home to….”

Does he have his failings? Of course. “I’ve not been a saint,” Bon Jovi declares. Whatever the negative implications of that sentiment, there are positive ones too: it implies forgiveness and redemption, something else that’s in drastically short supply in marriages these days, whether it’s the Hollywood-rocker variety or those of us remaining mortals.