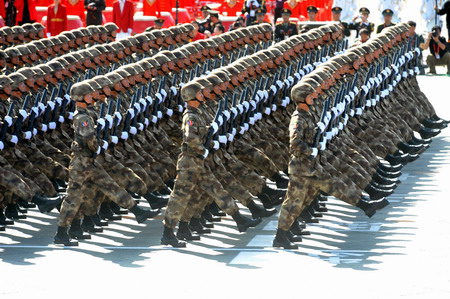 The world is heading towards the second scenario envisaged by
Francis Fukuyama in his afterword to The End of History and the Last
Man: a combination of capitalism and authoritarianism, driven by
China’s brand of ‘resilient authoritarianism’. Conducted in a spirit of
‘if you can’t beat them, join them’, China has successfully used
globalization to make itself indispensable to the functioning of the
world economy and solving of world’s problems. This has in turn fuelled
the legitimacy and popular support of the Chinese Communist regime,
enabling it to tighten its authoritarian rule.

‘If you can’t beat them, join them’ – and thereby beat them

China’s
post-1978 reform and opening, conducted in a spirit of ‘if you can’t
beat them, join them’ – and thereby beat them, have led to a situation
in which the artillery of the Chinese economy is tightly connected to the world. 2010 is said to be the year in which China will overtake Japan as the second largest economy of the world. The World Expo will also be held in Shanghai this year. The prime minister, Wen Jiabao, has called it the fulfilment of a ‘100-year old dream’.
Like the 2008 Beijing Olympics, and, in future, the possible 2018 FIFA
World Cup in China and the 2020 landing of China’s lunar rover (or even
astronauts), it will showcase the Chinese Communist Party’s organizational power, the nation’s strength and cultural greatness. Meanwhile, Beijing has shown no sign of political liberalization. It seems that, as the mandate of capitalist heaven is passing to China, the world is heading towards the second scenario envisaged by Francis Fukuyama in an afterword to the second, 2006 edition of The End of History and the Last Man – the victory of an authoritarian type of capitalism over the liberal democratic capitalist states. This is not Fukuyama’s preferred destination.

China’s international path is quite different from that followed by previous challengers of the Anglo-Saxon capitalist democratic order, namely Germany, Japan and USSR.
The Soviet aimed to create an independent socialist bloc, counter to
the dynamics of world capitalism. It was to end in failure, when,
forced to defend this bloc in an arms race, it was ultimately
exhausted. Imperial Germany and Japan, while practising state-led capitalism, also ended in collapse when their military challenge to Great Britain and the US imposed an unbearable burden on their economy. Determined not to repeat the Soviet blunder, China aims to open itself as widely as possible to capitalism. To avoid the mistakes of Germany and Japan, China rules out direct military confrontation with the US. Instead, China participates actively in the international governance structure, aiming to build as widely as possible on worldwide opposition to US unilateralism on issues ranging from the Iraq War to climate change.

In short, China is using globalization to make itself indispensable to the functioning of the world economy. With unprecedented interdependence, it is increasingly difficult for the US to impose a strategy of isolation and confrontation. The US is drawn into a much broader dialogue with China
on a wide range of issues. Recent talk of a ‘G2’ shows the remarkable
shift of the two countries’ relative strength – they are now seen as
near-equals whose cooperation is essential to solving the world’s
problem, from climate change to economic crisis to nuclear weapons.

To be sure, it will take decades for China’s economy and comprehensive national strengths to catch up. The Communist regime also faces a host of internal problems.
Economic disparities among urban and rural populations, rampant
corruption among the elite, environmental degradation, a wealthier and
better-educated middle class, and a more robust civil society could
undermine the stability of the Communist regime. However, China’s authoritarian system is not stagnant. We should not underestimate the adaptability of the Chinese leadership. In
the past few years, Hu Jintao and Wen Jiabao have done a lot to draw
public attention to the country’s pressing demographic, environmental
and social challenges. China’s developmental strategy has changed from an obsession with GDP growth to greater concerns for ‘social harmony’. The Chinese Communist Party has shown its remarkable ability to adjust and introduce constant social, legal and administrative reforms, making the system actually sustainable. Sinologist Andrew Nathan characterized it as China’s ‘resilient authoritarianism’.

We
thus have a future where a benign international environment combined
with a more sustainable economic development will give the Chinese
Communist Party more political capital, enabling it to tighten its authoritarian rule. In June 2009, Liu Xiaobo, a leading signatory of the pro-democracy Charter 08 movement, was charged with ‘inciting subversion of state power.’ He was sentenced to 11 years in jail later in December. In July, Xu Zhiyong, a lawyer and activist renowned for his work of China’s most disadvantaged and his commitment to advancing the rule of law, was detained by the Chinese government. In December, the Ministry of Industry and Information Technology (MIIT) announced an unprecedented plan to white-list the Internet, turning the whole Chinese internet into a politically–filtered intranet.

Outside China, there has been little official pressing on human rights and democracy. In February 2009, US Secretary of State Hillary Clinton landed in Beijing with a conciliating message:
‘our pressing on those issues can’t interfere on the global economic
crisis, the global climate change crisis and the security crisis.’ In
September, President Obama
refused to meet with Dalai Lama. Following Liu Xiaobo’s arrest, neither
the White House nor Secretary Clinton have made any public comments on
it.

It is contended that economic and social development creates
pressures for democratization that an authoritarian state cannot
contain. To be sure, modernization theory attributed that there was a
very strong correlation between economic liberalization and political
democratization, with the creation of a middle class seeking political
rights. But an empirical correlation was not a causal connection. It is by no means a certainty that the emerging middle class in China will have an appetite for liberty beyond purely economic.

At present, the Party enjoys political support of politically strategic populations, namely the middle classes. According to some studies, in the mid 1990s, 68% of managerial personnel and 34% of white-collar personnel and professionals were Party members. In recent years, the Party has aggressively recruited university graduates. Upward mobility, stable employment prospects and improved standard of living resulting from China’s economic boom have led to their passive acceptance of the regime. Less obviously, there is a nationalistic sense of pride in China’s rise as an economic and political power. So long as things continue as they have in the recent past, these people are unlikely to turn against the regime.

Imperial Germany and Japan of the past were economically successfully authoritarian capitalist powers, which were too small to take on the US. Singapore of today has a highly successful one-party advanced capitalist economy, but it is a city-state, not a big country. As China
today rapidly narrows its economic gap with the developed world, it
might be cited as an imposing instance, of a quite different magnitude,
of this brand.

During the November 2009 APEC Summit, Singapore Minister Mentor Lee Kuan Yew retorted a remark by Michael Elliott, Time Magazine International Editor, that China
is not a democratic system: ‘You got your pro-democracy activists, but
do the Chinese people worry about their vote and freedom of speech?
They want the lives that they see in Hong Kong, in Singapore and before this downturn, in Taiwan.’ In his recent book Democracy Kills: What’s So Good About Having the Vote?, BBC foreign correspondent Humphrey Hawsley wrote ‘the average income in authoritarian China is now twice that of democratic India.’ Such are the moods of our time.

Are we in for an Age of Capitalist Authoritarianism? In his 1985 book Amusing Ourselves to Death, social critics Neil Postman contrasts the worlds of George Orwell’s 1984 and Aldous Huxley’s Brave New World:

Authoritarian
regimes conceal a tremendous fragility in their apparent strength. The
Chinese leaders know it. And this drives them to the systematic
destruction of all forms of civil society, and anxiety over everything
from the internet to Falun Gong to Xinjiang Uighurs and Tibetan monks. However,
the West has been remarkably sanguine about this resurgence of
authoritarianism. Western businesspeople, investors and bankers are
flocking to China to grab a piece of profits. Western leaders merely mumble about human rights when they visit Beijing. This has in turn fuelled China’s status as a great power, ensuring popular support for the Communist Party through continuing economic development and nationalist sentiment.

Lord Patten, the last governor of Hong Kong, comments that China has done astonishingly well in the international system, but challenges its basic foundations. He thinks authoritarian capitalism will not win out because it did not have ‘safety valves’. But setting this issue aside, we are already seeing its effects internationally: Iran, Burma and other Third World dictators find it attractive to make deals with China, and China holds the world hostage in climate change and currency talks. If the model is successful, then there will be both moral and practical consequences. Morally, it is the question of whether the West can simultaneously accept trading with China and discarding political ideals. Practically, when China is strong enough, its narrow definition of national (or Party) interests and the inherent fragility of the system will mean that it will disregard international responsibilities when they see fit.

China’s resilient authoritarianism
means that changes to the political order would be effectively
suppressed by a mix of carrots and sticks. It then becomes all the more
important for Western politicians and outside forces to do more to promote human rights and democracy – before the order becomes established and the world is held hostage. Otherwise, we will face a brave new, but fragile, world.

In 1989, the Berlin Wall fell and we declared the End of History. In 1999, George Bush senior declared: ‘Trade freely with China and time is on our side.’ In 2009 and beyond, it is
becoming fashionable to prefer stability to democracy. The West hopes
that globalization, development and integration will make China more liberal. As it seems apparent, time is not making China more Western; it is making the world more Chinese. Many leaders, Chinese and Western included, are building walls back up again. History will not forgive us for our complacency and hypocrisy.

Andy Yee is a graduate student in Pacific Asian Studies at the School of Oriental and African Studies in London. This article has been reproduced with permission from openDemocracy.

none More by Andy Yee