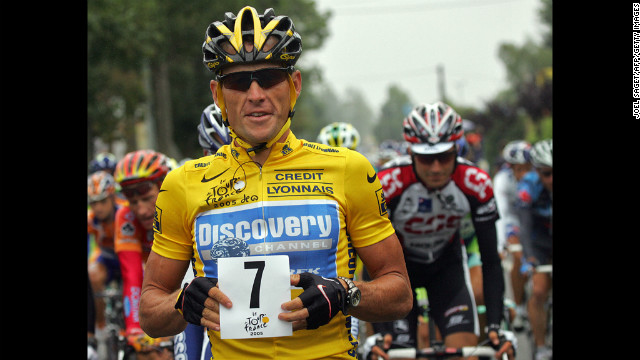 The scandal of Lance Armstrong’s alleged drug use has upset and disappointed many of his fans. For those of us with no interest in cycling, the premise is that Armstrong’s astounding sporting achievements such as winning the Tour de France seven times in a row rendered him an almost superhuman status. If the word ‘demi-god’ springs to mind, you are not alone: a recent CNN report described Armstrong’s Tour victories as being “like the demigod Hercules completing his ‘Twelve Labors’”.

In addition to his superb athletic performance, Armstrong overcame testicular cancer earlier in his career, and used his subsequent celebrity to promote his own charitable foundation as it raised funds for cancer research. Not only was Armstrong an amazing athlete, but he used his powers for the good of others.

Sometimes people take offense at my lack of interest in sport: for example, my attitude to Armstrong’s seven consecutive Tour de France victories was that, being races, someone had to win them. It turns out I was wrong, since the Union Cycliste Internationale has now stripped Armstrong of his titles and declared that those particular Tours will record no winners. Meanwhile, those cycling fans who praised Armstrong’s feats as “superhuman” – beyond normal human limits – were shown to be right all along.

Losing a hero can feel awful; though probably not as awful as Armstrong himself is feeling right now. But is it really his fault? Well, yes of course it is. But it is not entirely his fault. Society made a hero out of someone who did not necessarily do anything particularly heroic.  But let’s not get ahead of ourselves.

What is a hero?

According to the heroic Online Etymology Dictionary, the word hero entered the English language in the 14th Century, originally from the Greek word heros for demi-god, which in turn meant defender or protector. Obviously the demi-gods of Greek myth did much more than protect and defend, and their superhuman feats fleshed out the more narrow sense of the word, until English-speakers began identifying our own heroic citizens. The charmingly anachronistic ‘New and complete dictionary of arts and sciences: comprehending all the branches of useful knowledge, with accurate descriptions as well of the various machines, instruments, tools, figures, and schemes necessary for illustrating them, as of the classes, kinds, preparations, and uses of natural productions, whether animals, vegetables, minerals, fossils, or fluids; together with the kingdoms, provinces, cities, towns, and other remarkable places throughout the world’ published in 1763 by ‘A Society of Gentlemen’ helpfully defines ‘hero’ as:

“in the ancient mythology, a great and illustrious person, of a mortal nature, though supposed by the populace to partake of immortality; and, after his death, placed among the number of the gods. Hero is also used in a more extensive sense for a great, illustrious, and extraordinary personage; particularly in respect of valour, courage, intrepidity, and other military virtues.”

But the English language did not stop evolving in the late 18th Century. At some point in the intervening years we have agreed that the measure of a hero – particularly a personal one – is determined by the strength of our admiration. A hero needn’t be superhuman or even particularly powerful. Instead, the “military virtues” become metaphors applicable to the whole range of human experience. Rosa Parks courageously refused to retreat in the face of an ugly racist confrontation. Was her courage, relatively speaking, any less than that of the Norse giant who single-handedly held back a Saxon army at Stamford Bridge, slaying as many as 40 of his foes while his Viking brothers fled?

These evolving definitions of hero present a conflict in contemporary language. On the one hand, Armstrong’s feats were very impressive. We could attribute to him the heroism of the demi-god, whose abilities and achievements simply outrank mere mortals. But by the more modern definition of heroism, Armstrong may not have qualified. Is it really heroic for an athlete to perform their chosen vocation? Are there military virtues associated with high performance athleticism? If so, wouldn’t all contenders for the Tour de France qualify as heroes?

Armstrong’s many impressive victories told us that he was heroic in the demi-god sense. But they told us very little of his heroism in the virtuous sense, certainly nothing to distinguish him from every other professional cyclist. The problem is that the public failed to keep these two definitions separate, hence his heroic achievements were accepted as evidence of a heroic character.

Now people feel betrayed, as though Armstrong cheated our character assessment as well as cheating on the bike. But while cheating at cycling is entirely Armstrong’s fault, we can’t blame him for our own false presumptions about his character.

Confucius laid out a simple means of assessing a person’s character:

This is Confucius’ three point plan for triangulating a person’s character. When it comes to Armstrong, what did we really know about him? While we all knew “what he does” in the form of cycling, most of us would know neither his motives nor where he is at rest. In other words, all we ever really knew about Armstrong when we attributed him heroic status was that he had won many difficult cycling races, after recovering from cancer. According to Confucius, this is insufficient information to assess a person’s character.

We heap adulation on great sportsmen and athletes because their feats are easy to assess, analyse, and compare. It is easy for us to pick the outlier, the high achiever, and turn their efforts into heroic accomplishments. But as mere spectators, aren’t we just becoming emotionally involved in a form of entertainment, telling ourselves mythic stories to enhance exercises that have become intensely rational and scientific? What is the worst thing about Armstrong’s alleged drug use: that he won unfairly, or that he spoiled the glamorous story we constructed about his triumph over cancer and subsequent victories?

Nonetheless, the story of Armstrong as a valiant hero met a need in our collective psyche. The mere thought that someone could appear to transcend human limits and human frailty seems to offer hope to all of us — a vague and unspecified hope that we are not limited to the known constraints of our biology, that an outlier can come along and change everything for us. We still need, like our ancient ancestors, to put ourselves among the gods and lend immortality to human existence. We need to believe that something remarkable can free us from our own expectations, surprise and delight us with qualities that hint at greater things, the hidden potential of the human spirit. Perhaps this is the deepest disappointment of Armstrong’s fall from grace: it wounds the hope that there was any grace there to begin with.