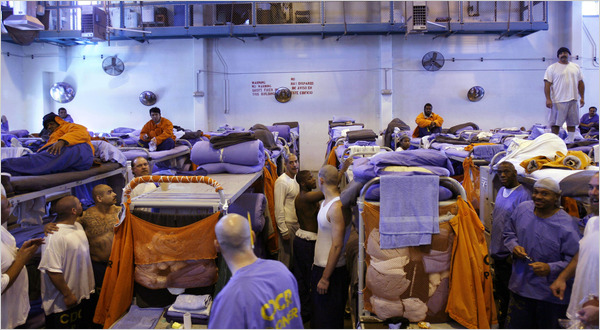 In 2008, the United States sailed past a
human rights milestone. For the first time in its history, more than one in
every 100 of its adult citizens was behind bars. This appalling statistic ought
to be etched on every politician’s agenda. Instead, prison reform is hardly
mentioned when voters voice their priorities.

Here are some of the unsettling figures.

The US jails more people than any other
country in the world – about 2.3 million, in a population of 310 million. China
says that it holds 1.5 million and Russian only 890,000. The US has 5 percent
of the world’s population and 25 percent of the world’s prison population.

Explosive growth in the number of people on
probation or parole means that there are more than 7.3 million people in the US
correction system — 1 in every 31 adults. When these figures are broken down,
they become even more disturbing. Only 1 in 89 women is in the correctional
system, but 1 in 18 men; only 1 white in 45, but 1 in 27 Hispanics and 1 in 11
blacks.

The US is truly exceptional in its rates of
incarceration. According to figures compiled by the International
Center for Prison Studies at King’s College London, it has 753
people in prison or jail per 100,000 of population. Russia is a distant second,
with 627 prisoners for every 100,000 people. New Zealand’s figure is 199,
England’s 151, Australia’s 134, Canada’s 117, German’s 88 and Japan 63. The
median figure for all nations is about 125.

Why does the United States, which prides
itself on being a beacon of liberty for the world’s oppressed, jail so many
people? Criminologists cite a number of reasons: a history of racial
discrimination, privileging of individual responsibility, sentencing laws, politicised
judges, a high incidence of violent crime, the influence of a hellfire and
brimstone brand of Christianity, the political sway of incorporated privatised
prisons, and so on. The problem is deeply rooted in American culture.

But in recent times it has become much
worse. An explosion in incarceration began in the 1970s. Between 1925 to 1975,
there were only about 110 people in prison per 100,000 people. But in the
1970s, a “get tough on crime” attitude took hold. Sentences lengthened, a
“three strikes, you’re out” put offenders behind bars for life and convictions
for drug trafficking sky-rocketed. In 1980, there were 41,000 drug offenders in
prison; today there are more than 500,000.

Back in the 19th century the US prison
system was regarded as the most humane in the world. The French sociologist
Alexis de Tocqueville came to the US to study its exemplary prison system. His
long report was full of admiration: “The
American penitentiary system must be regarded as a new victory of mind over
matter in the great and constant task of man.” But now,
says sociologist James
Q. Whitman, “far from serving as a model for the world, contemporary
America is widely viewed with horror”.

A proposal by a Democrat Senator from
Virginia, James Webb, to establish a National
Criminal Justice Commission is slowly making headway in Congress. Senator
Webb has become a rarity amongst politicians – a champion of prison reform. He
has set down an ambitious agenda: studying the causes of “this incredible
increase in incarceration”, comparing the US experience with other countries,
reform of prison management, and bringing down the cost of prisons.

Cost is becoming an increasing urgent
issue. In the current recession, state governments are committed to prison
expenditure and find that they have to trim higher education and early
childhood education, which experts say helps to prevent crime. According to a
report from the Pew Center on the States, between 1987 and 2007, state
expenditure on higher education rose by 21 percent while expenditure on
correction rose 127 per cent.

Is this a complex issue? Yes. Can it be
ignored? Not in a civilised country. In Senator Webb’s words: “We have an
incarceration rate in the United States, the world’s greatest democracy, that
is five times as high as the average incarceration rate of the rest of the
world. There are only two possibilities here: either we have the most evil
people on earth living in the United States; or we are doing something
dramatically wrong in terms of how we approach the issue of criminal justice.”

Prison reform is clearly one of the biggest
social justice issues confronting the US – and it is hardly on the radar of
most voters. Black scholar Glenn Loury, of Brown University, laments that: “speaking of the country as a whole, there is no broadly based
demand for reform, no sense of moral outrage, no anguished
self-criticism, no public reflection in the face of this massive,
collective failure”.

Is part of the explanation, perhaps, that 5.3 million people who have
done time in jail are officially
disenfranchised – 1 in 41 adults? All but
two states ban prisoner voting; 35 states prohibit people on parole from
voting, and 30 prohibit people on probation from voting. Two states deny the
right to vote to all persons with felony convictions, even after they have
completed their sentences The upshot of this is that the expansion of the
prison population over the past 30 years may even be having a significant effect
upon politics. The Sentencing Project, a lobby group, estimates that 13 percent
of black men are disenfranchised, a rate seven times the national average.

The erosion of human dignity which this
represents is characteristic of other institutional characteristics of the
American penal system. Most prominent is the death penalty, which is applied quite unequally. Of 1,217 prisoners executed since 1976, 460 of them died in Texas. But there are many others. One extraordinary feature, made possible by the
internet, is the ability to view profiles of current prisoners, with photos and
their criminal record. If you go to the “offender search” feature of the
Florida Department of Corrections, for instance, you can search the state’s
prisons by crime or even by race.

Another is the fact that many cash-strapped
jails actually charge inmates for food, phones, laundry services and medical
care. Even liberal
Massachusetts is considering charging inmates $5 per day to subsidise the cost
of their confinement. This could drive people back to crime to pay their debts.

Whitman contends that one of the roots of
the problem is that American law is procedural rather than dignitarian:
“substantive norms of human dignity play a piddling role in law compared to
their central place in European jurisprudence. For the US, key values always
turn on the idea of “due process”. The US also places a greater emphasis on
punishment as a purpose of sentencing — hence the broad acceptance of capital
punishment, as well as other quirks, like inviting the families of murder
victims to witness executions.

A hundred years ago, Winston Churchill,
then a junior minister in charge of prisons, gave a
stirring speech in the British Parliament, one which was surprisingly
idealistic for such a hard-nosed political figure. He concluded that “The mood
and temper of the public in regard to the treatment of crime and criminals is
one of the most unfailing tests of the civilisation of any country.”

At the moment, the United States is failing
the test. Perhaps the Webb Commission will help to restore sanity and human
dignity to its broken prison system.