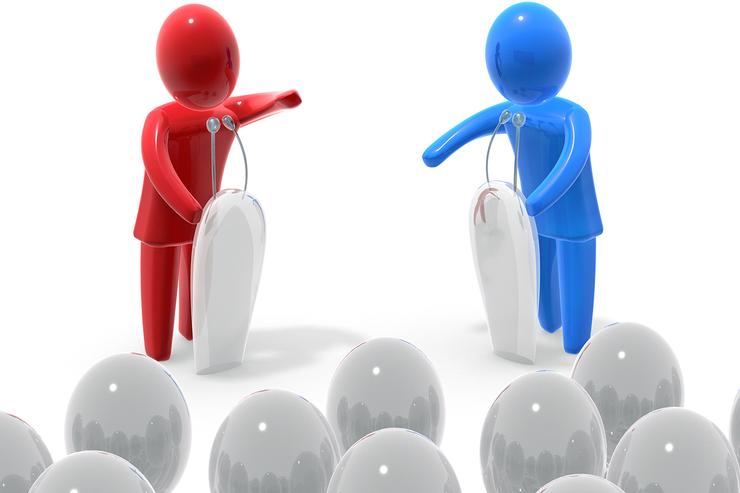 Early in November a pro-life group at Oxford University organised a debate on the topic, “This House Believes Britain’s Abortion Culture Hurts Us All”. Speaking for the pro-life side was London Telegraph columnist Tim Stanley and for the pro-choice side, Brendan O’Neill, the editor of the on-line magazine Spiked.

Both men, though lacking uteruses, as protesters helpfully pointed out, are accomplished speakers who would have been worth hearing in debate. But the debate did not take place.

Instead, Oxford’s Student Union Women’s Campaign (WomCam) protested so shrilly that Christ Church, the college where the debate was to have taken place, cancelled it forthwith. The organisers were unable to find another venue. The logic of WomCam’s argument was not overpowering — “It is absurd to think we should be listening to two cisgender men debate about what people with uteruses should be doing with their bodies” – but its volume more than compensated for its philosophical deficiencies.

But let’s forget the debate (the point and ethics of debates is a topic in itself), and examine the ideas of the pro-choice speaker, Brendan O’Neill. (He later published his speech in Spiked, while Stanley published his in the Catholic Herald.) O’Neill is broadly an opponent of euthanasia, as he has been of same-sex marriage, Malthusianism and the culture of narcissism, but he has also been a supporter of abortion rights. Why?

One problem is O’Neill’s biology, on which to be fair he says very little in his speech. He asserts that the foetus is “at least a potential human life”. But any human embryology textbook will tell you that we have an actual human organism from conception with potential: potential of a kind that makes it a human individual, with objective interests in its own future. Nor is O’Neill’s foray into theology more successful: it is untrue that Aquinas, for all his lack of our scientific knowledge, did not regard early abortion as a grave moral evil, even if he did so on grounds other than the personhood of the early foetus.

O’Neill’s other arguments are more interesting.

First, his views on the rhetoric of abortion. He begins by noting that the word “culture” is often appended by journalists as a ploy to increase people’s fears about something.

“How can you make what is a pretty mundane medical procedure that British women have been legally accessing for nearly 50 years sound like something terrifying? By adding the magic c-word.”

Presumably this rules out using the term “Culture of Death”. But all that term really means is that we live in a world where people’s dispositions, attitudes and intentions, and the law and practices of their society, have become increasingly accepting of the idea that innocent human lives may be intentionally ended in some circumstances.

O’Neill himself talks of abortion as something which is a “mundane medical procedure” that people have on the whole accepted without much fuss, a few pro-lifers aside, such that only people using “fear” in scare quotes can make an issue of (he doesn’t quite accuse them of creating a “moral panic”). Strangely however, this “mundane medical procedure” can sometimes be an “unpleasant” procedure chosen in a state of “turmoil”, something not usually associated with hip-replacements which, unlike abortion, have not occupied the minds of some of the greatest moral philosophers.

So presumably there has been a change in the culture from an earlier time when abortion was generally regarded as seriously morally wrong: not so different from infanticide, no part of good medicine and performed by operators seen as morally below the pimps and madams from whose ranks they were sometimes drawn.

Getting serious about autonomy

But the rhetoric is a side show. Autonomy is the core of O’Neill’s stand. “We have to get serious about moral autonomy” which involves defending it “in the realms of thought, speech, conscience, and the body, including reproductive rights.” And autonomy means being “pro-choice”. For, as he says,

“It makes not a bit of difference to me whether a woman chooses to continue her pregnancy or end it. It’s none of my business, or yours. All I care about is that it is she who decides. The content of the decision matters only to the woman and her loved ones; but the act of making a decision, the act of exercising moral choice, is something we all have a very real interest in defending. It isn’t the abortion I cheer – it is the fact that a choice is being taken by an individual over a key aspect of her life and future.”

It all sounds rather stirring. But what does it amount to?

O’Neill it seems, like some 19th century Philosopher, is worshipping the Will. Not the ends the person wills, or even the mental ability to make decisions, but the fact that the person wills at all.

This is, however, bizarre. How can Will (with a capital W) be praiseworthy, without reference to what is willed? Decisions are always particular decisions. And to laud decisions in general is really to misunderstand what they are; namely the willing of a particular end. If we merely praise Will without end, we end up with willing without end.

What moral standard does this provide us with? None whatsoever. To talk of the act of exercising moral choice, while praising mere choice as morally valuable, is not to talk about morality at all, any more than pointing at a compass needle without a compass is to engage in orienteering.

If we value choices without reference to the good or bad things that might be chosen, then it becomes impossible to see why Will should be so valuable in the first place, a value that exists because of its relationship to the good. Nothing could be more patronising to women than to suggest that the most important thing about the abortion debate is autonomy and not the rightness or wrongness of the decision itself.

But what if a woman makes her choice “in good faith”? That’s easy enough to answer. After all, Prime Minister Tony Blair insisted that he had dragged Britain into the Iraq War “in good faith” — as though that was the main moral issue at stake! Good faith does not necessarily make for a good choice – or a choice that others should have helped or allowed us to make – or a choice for which we should never feel remorse for the harm it did to others and to ourselves.

One consequence of deifying the Will is that the ends become “mundane”, in the words of O’Neill. This is the unintentional tragedy of O’Neill’s position — though oddly enough, O’Neill has sometimes shown signs of seeing through “autonomy” worship, notably in his vigorous critique of gender ideology where in fact the body is drained of all objective meaning (though these are not O’Neill’s words).

In a Will-focussed world, the greatest mysteries of life — pregnancy, parenthood, life and death, sex and the body — all appear mundane, even boring. What is special about pregnancy and abortion? That is not a question for which blind worship of “autonomy” can provide an answer. Nor is an answer provided by any worldview which ignores the fact that we are rational bodily beings who can will, for ourselves and each other, real human goods fulfilling our nature as the kind of beings we are.

Although ordered toward these goods, we sadly can and often do choose wrongly against them. And we’re far more likely to do that if, by worshipping choice alone, we make moral reality unreal.

Anthony McCarthy is Education and Publications Manager at the Society for the Protection of Unborn Children (SPUC). He is currently writing a book on sexual ethics and can be contacted at asdmccarthy@hotmail.com.

Dr Anthony McCarthy is founder and director of Bios Centre www.bioscentre.org and a visiting scholar in moral philosophy at the International Theological Institute in Trumau, Austria. More by Anthony McCarthy