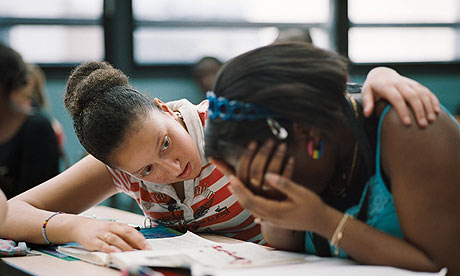 It’s remarkably like The Emperor’s Clothes. Only this one is a true story.

Hard to believe that it is.

As Congress moves toward reauthorization of the Elementary and Secondary Education Act, the problem is not that the Department of Education is not doing enough but that it suffers from an acute case of what psychologists call “organizational narcissism.” If they really wish to address America’s inner-city public school crisis, federal education officials must look beyond the boundaries of their own agencies and recognize the crucial role of churches.

That rests on the big “if”. According to Bradley, they do not so wish.

…even with overwhelming evidence that, other than family support, church involvement is the most consistent predictor of academic success for inner-city children, the organizational narcissism of the education industry prevents it from tapping into the resources of black and Latino churches.

They have what he calls an “education monopoly” and enjoy wielding power and receiving big paychecks while devising new programs to address problems they’re responsible for in the first place. Though the Deparment of Education is unaware of that, since that would require institutional integrity.

This should not be happening, for many reasons. Here’s one:

In 2008, President Obama rightly acknowledged that, “There is no program and no policy that can substitute for a parent who is involved in their child’s education from day one.” This is an indisputable truth. What should baffle every American citizen is that the role of inner-city ethnic churches is oddly missing from the Obama administration’s education reform vision.

It’s because of politics and power, says Bradley. And the distinct lack of initiative to change or even seriously confront ‘the system’ that’s broken. “We have a graduation crisis,” he told me, citing statistics from major cities of around 28-35 percent of black males graduating from high school. Which leads, he continues, to a lack of not only education but skills and ambition, which leads to unemployment, drug use, crime and incarceration, teen pregnancy, hopelessness…

This is intolerable. And, as Bradley pointed out to me at least twice, it isn’t an achievement gap based on race but opportunity for access to involvement of families and community based churches.

A series of 2010 studies in Howard University’s Journal of Negro Education (JNE), one of America’s oldest continuous academic journals focusing on black people, reported how church involvement increases education success in inner-cities. In “Faith in the Inner City: The Urban Black Church and Students’ Educational Outcomes,” Dr. Brian Barrett, an education professor at the State University of New York College at Cortland, describes the unique contributions black churches play in cultivating successful students in the inner-cities…

In fact, back in 2009 Barrett reported that for black inner-city youth who reported attending religious services often, the black/white achievement gap “was eliminated.”

There. It’s verifiable…as if evidence were needed for the benefit of character development and the foundation of morals.

Barrett reports that one of the most important advantages of inner-city churches is that they provide “a community where Black students are valued, both for their academic success and, more broadly, as human beings and members of society with promise, with talents to contribute, and from whom success is to be expected.” Churches also affirm inner-city youth as trusted members of a community that celebrates academic success, and the practices that produce it, which overrides the low expectations communicated at school.

The ‘soft bigotry of low expectations’. What improvement has realization of this made in the past 5-10 years?

Barrett is not alone. In another JNE study of 4,273 black students titled, “How Religious, Social, and Cultural Capital Factors Influence Educational Aspirations of African American Adolescents,” Hussain Al-Fadhli and Thomas Kersen, sociology professors at Jackson State University, report that “family and religious social capital are the most potent predictors for positive student college aspirations.” These scholars explain that “students who attend church and believe religion is important may be more likely to interact with more adults who can help them with their school work and even provide guidance about their futures goals and plans.” The authors conclude that students with an “active religious life, involved parents, and active social life have greater opportunities and choices in the future.”

So the answer is…

Lost on the Department of Education, which remains caught up in its organizational narcissism. And new schemes to justify its existence. In a dysfunctional system. Amazing.

Bradley suggests citizen involvement with the black ministerial alliance in the inner-cities, separate from any government agency, is the beginning of the solution to the crisis in the schools. And that seems like the least we can do, and the best place to start to impact the lives of these students.

“Provide a new narrative,” he told me, and we give them an alternative and the chance for success.