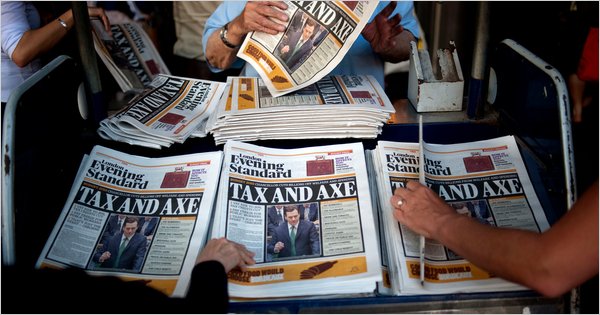 Well, Britain’s Coalition Government has
produced its first budget, and everyone has been talking about it. “Tough” is
one of the words being used and “brutal” another. What does seem to be widely
acknowledged is that the country has for a long time now been using public
money it hasn’t actually got for various things it doesn’t really need.

I dare say we won’t get cuts in public
expenditure that will affect the more ludicrous and unnecessary projects but,
oh, how I wish we could. Do we need posters – as we have in my local area –
urging more lesbians to become foster-parents? Did we need a scheme urging more
children to obtain contraceptives for party nights? What about the grants of
money to various dotty groups promoting various forms of sexual activity outside
of male/female marriage? None of these things have been useful. The teenage
pregnancy rate has soared as more and more youngsters have been given
contraceptives – and sexually-transmitted diseases have doubled and trebled and
quadrupled, especially among the younger teenagers, so that the most commonly
used expression in the medical profession about the problem is “epidemic”.

We might hope that at a time of financial
constraints, the way could be opened up for a discussion on such things. Don’t
hold your breath. It is true that Prime Minister David Cameron has made clear
his commitment to marriage and family life, and his speeches immediately on
arriving at Downing Street echoed with reassuring words like “responsibility”
and “commitment”. Deputy Prime Minister Nick Clegg has also recently spoken
about the importance of protecting children and ensuring a good childhood for
the next generation. And both men are happily married with children of their
own – in Cameron’s case a new baby is due later this year and it was extremely
charming to note that his very first act on arrival in Downing Street was to
get out of the car, and walk round to the other side to open the door for his
wife. He’s a gentleman, and his good manners are unaffected and genuine.

But… and it’s a big but… does Mr
Cameron actually make the mental connection, at a deep and common sense level,
between the need for discipline and restraint in public spending, and the
importance of social cohesion? Has he worked out that, if there are tough times
ahead, having strong and united families is going to be crucial? Does he think
that the teenagers who gather in the streets and shopping-centres of our towns
on these warm summer nights, drinking and vomiting and fighting and shrieking,
are going to be capable, in due course, of running homes on a tight budget,
feeding children with nourishing home-cooked food, sharing family hobbies and
interests in a cheerful pleasant atmosphere?

In the past, when there were difficulties
and hardships – I’m thinking of war, unemployment, international financial
crises – ordinary people coped, not because of Government exhortation or police
restraint, but because they were able to delve into deep inner personal
resources. These resources were practical – skills, recipes, family networks,
neighbourly co-operation – and spiritual. The spiritual values were things that
had been caught and taught from older people, and were encouraged in home and
school and church and community: they included, (in no particular order of significance)
thrift, patience, honesty and fair dealing, courage, faith in God, and the
importance of putting others before self.

Today, it is probably going to be possible
to persuade people that they won’t have as much spending-money as they have enjoyed
for some years past. Holidays abroad, snacks between meals, meals out in cafes
and restaurants, lots of household gadgets, might not be a normal part of life
for a while. People might be able to accept this – but will they, at a
practical level, be able to cope? I don’t mean to be facetious, but I’m
genuinely troubled. Lots of people honestly don’t seem to know about modest
inexpensive trips to parks and the seaside with packets of sandwiches, about
home-cooked meals where pasta or potatoes make up bulk and lots of grated
cheese makes a tasty topping. All sorts of skills – getting a family round a
big table for a common meal, darning socks, taking up a hem on a dress,
patching the knees of jeans, turning a wooden crate into a dolls’ house,
bottling fruit – are now regarded as laughably old-fashioned or are simply,
absolutely, utterly unknown.

Skills are taught in families, and passed
on through family culture in a society where such everyday networks are prized
and valued. Stable and faithful marriages teach things like coping,
apologising, managing difficult relationships, looking ahead, finding hope and
encouragement in small things.

We are going to need a lot of goodwill, and
a lot of practical skills, if the predictions about our economic problems in
Britain are true. How will we find them? It’s possible that there will be a
spate of interest in cookery classes and home-management skills. Our schools
could usefully be encouraged to emphasise domestic science lessons. We could
urge that youth groups start to try interesting children in gardening and in
growing vegetables.

But frankly the easiest way to promote
socially-useful skills, to help people cope through tough times, to ensure that
no one goes hungry, and to boost national morale, is to foster, through every
available means, a culture of support for male/female marriage, respect for
traditional family structures, and a sense of self-worth among young people as
they approach manhood and womanhood and start to plan ahead.

So while the Chancellor talks about tough
times, and people start to look at how taxation will affect their disposable
income, we need to be honest about the extent to which our lifestyles matter.
We are going to need resilient people, schooled in domestic lore, capable of
rising to everyday economic challenges and confident in their ability to care
for those in need. For this, the best possible upbringing is one in a home with
parents who are committed to a lifelong bond and who share a sense of heritage
with previous generations.