With the final Harry Potter movie out this summer, an era ends. In part it feels like the ending of my childhood – or at least a closing of the chapter that significantly shaped who I am today.

I remember exactly where I was when I was first introduced to Harry Potter and the Sorcerer’s Stone (the first book in the series). My family and I were loaded into our oversized van heading up to see my grandfather who had just been diagnosed with cancer. To pass the hours it took to get to his house weekly, my mother would read the book out loud to us as my father drove. We listened with rapt attention and from that moment each and every one of us was hooked!

When the second book came out there was competition in the family to see who would read it first. With my mother and four children all waiting to read the second installment – there was a bit of a juggling act. I still remember one day my brother Peter and the book went missing. This wasn’t unusual – only this time he wasn’t in any of the normal spots he hid. He was finally discovered inside the locked van, in the closed garage, hiding under one of the seats with a flashlight to read by. Sneaky little guy!

The books captivated us. Then the first movie came out. It was the first movie I ever took my younger siblings to. My friends and I decided it would be girl’s night out and we brought out little sisters along to a sold-out show in a dank and musty theater. I can categorize a lot of the major milestones in my life by which Harry Potter book I was reading at the time. I purchased the final book, Harry Potter and the Deathly Hollows, as I stood in the airport moving out of New York. Ironically, the previous book, Harry Potter and the Half-Blood Prince, was gifted to me as I moved to New York. 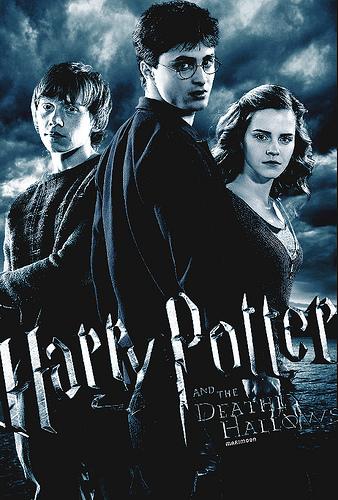 It’s been 13 years between the first book’s release and the last movie premiere. What in our current culture has stayed in vogue for 13 years? Nothing I can think of. These books and movies (even if the movies are far inferior to the books) bridge generations. They interest people in their fifties and the tweens who are just meeting the young wizard Harry for the first time. My eight-year-old brother has just discovered the series and can’t seem to put the books down. No doubt, he’ll be begging to see the final installment of the movies. For him, the fascination is just beginning. For those of us that followed from the beginning this is the final chapter. We’re about to close the book and step away from an awkward wizard with a funny scar and his unforgettable friends.