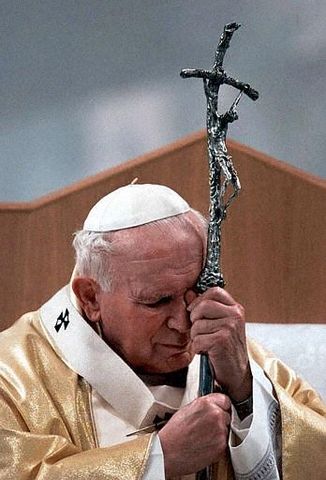 From the moment he passed away, he was called John Paul the Great. Now, he can be called Blessed John Paul II. Which is acknowledging what he was.

Detractors notwithstanding, I submit that this is fitting and appropriate. As Peggy Noonan did in her weekend column for WSJ. There are so many facets to his priesthood, episcopacy and papacy, but mostly how he was a witness to faith and a servant to the people of God. And people who didn”t know or accept God. ‘If the world was a global village, he was the village priest,’ notes the now familiar tribute.

On radio lately, I’ve focused particularly on the ‘nine days that changed the world,’ as Noonan does here.

This is so key to his service to humanity, I’ve been riveted by it for years. Partly it comes from having family from eastern Europe who suffered under the Soviet regime. Mostly it comes from realizing the power of the message is in facing evil by asking God what your role is, as JPII did as a young man who never imagined being a priest, and going where that answer leads.

And then going into the heart of oppression and taking the opportunity providence gives you to speak truth to darkness. He reminded millions of people in one country that they were not who the regime said they were. Their human dignity was noble and invincible and imprinted by God.

“After the proclamation of the Gospel, a deep silence fell over the tremendous crowd. Polish Communist Party leader Edward Gierek watched nervously from a window in a hotel adjacent to the square. He, and millions of others, wondered: What would he say? What could he say?

“Karol Wojtyla looked out at a sea of expectant faces, paused–and then gave what may have been the greatest sermon of his life.”

Theses and texts have been written about that homily, brief but tremendously powerful.

Today, he began, he wanted to “sing a hymn of praise to divine Providence” which had enabled him to come home “as a pilgrim”…

The Poles, he insisted, had a right to think…”with singular humility but also with conviction” that it was to Poland, today, that “one must come…to read again the witness of His cross and His resurrection.” This was no cause for boasting, however. “If we accept all that I have dared to affirm in this moment, how many great duties and obligations arise? Are we capable of them?”

Somewhere around that moment, communism lost its grip.

And so will any repressive ideology that reduces citizens to workers under the ultimate authority of the state.

He said that everywhere he went, and he went further across the globe than any pope in history. Countless members of humanity have been ennobled and encouraged and blessed because of his witness. It is only fitting that he be blessed as well.