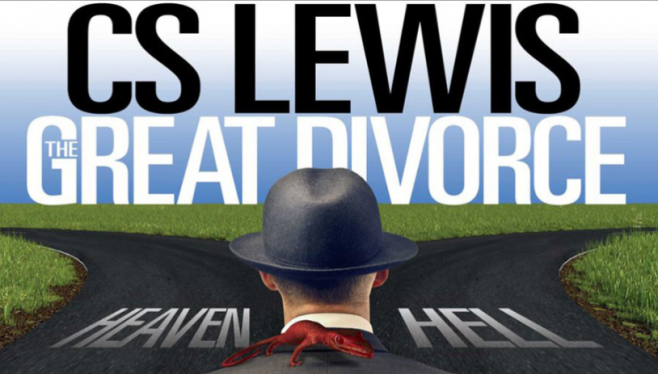 A few years ago good friends of ours introduced us to the New York-based Fellowship for Performing Arts (FPA), which performed C. S.  Lewis’s classic The Screwtape Letters here in Washington.  It was a great production, imaginatively staged, but now eclipsed by its recent, outstanding rendition of Lewis’s The Great Divorce.

“Our challenge was to turn a complex theological fantasy into an accessible stage adaptation that entertains and provokes lively discussion,” said FPA founder and Artistic Director Max McLean.

The Great Divorce is based on Lewis’s book of the same name published in 1946 which, as Lewis alludes to in his preface, is a response to William Blake’s Romantic, and revolutionary,The Marriage of Heaven and Hell, composed between 1790 and 1793. This latter work attempted to reconcile heaven and hell in a manner, to put it charitably, that was highly unorthodox, conceiving of them as part of a cosmic unity, or something, in which good and evil are reconciled.

The reader or theater-goer must suspend disbelief, of course, as the story opens with various “ghosts” on a bus from a fairly mild version of hell, one more of loneliness than hellfire (Catholics might perceive it as Purgatory), to another land, not quite Paradise, but a staging area for entry into heaven. These “ghosts” are rather pedestrian folks, mildly irritating and irascible.  However, through a number of scenes of witty and, more often, dramatic and compelling dialogues with heavenly beings or “spirits,” and some soliloquies, these same people reveal deep and troubling problems, some petty, some sinful, which keep them from letting go of their egos and embracing the promised land of love and peace.

Three actors play both the roles of Lewis’s narrator and almost a dozen characters who confront their own fears, obsessions, inordinate loves, and other reasons not to let go and enter eternal life.

According to the Producer’s Note, “And as we go along for the ride, Lewis poses a most challenging question: Given the freedom to choose Heaven or Hell, what will we really do? Are the gates of Hell locked from the inside?”

As Burke once said, our passions forge our fetters.

Not all of the “ghosts” are unsympathetic. In one scene, the actress Christa Scott-Reed delivers a poignant performance as a mother forever grieving the loss of her beloved son, Michael, at the expense of her husband, children and God Himself. She refuses to see any meaning in her grief or any purpose in her suffering. “I hate your religion and I hate and despise your God.  I believe in a God of Love.” (I am quoting from the book since the play seemed to emulate it almost exactly, at least as to dialogue.)

In another famous scene, the actor Joel Rainwater portrays a man who is inordinately enthralled by a vile red lizard on his shoulder that is incessantly chattering in his ear. In the book the lizard is explicitly identified with lust but is allowed a broader significance in the play for almost any kind of obsession or addiction that might distort the human personality. A spirit, also played by Scott-Reed, offers to kill the thing for the ghost who vacillates back and forth. In fact, the creature cannot be killed without the ghost’s permission.

When the spirit starts to destroy the lizard, the ghost cries in pain, “Why are you hurting me now?”

C. S. Lewis’s book was quite short. Yet, the challenges of time and staging made it impossible to include every scene in the play. One of my favorites, admittedly very difficult to replicate on stage, is that in which Sarah Smith, a woman unknown in life but now one of the most revered saints in heaven, engages her husband, a ghost, who is represented by two connected figures — a Tragedian in a hat and a dwarf on a chain. Evidently, the husband resented Sarah in life. Yet, she loves him with a perfect love and seeks his entry into heaven.  He resists.  In the course of the three-way dialogue, the husband’s responses shift from the dwarf, who is shrinking into invisibility, and deferring to the voice of the Tragedian who is becoming more and more affected, petty, and protective of his supposedly injured feelings.

At the end of the dialogue, Sarah does move on, still in bliss, prompting the narrator to ask a spirit, “Is it really tolerable that she should be untouched by his misery, even his self-made misery?”

The spirit responds, “That sounds very merciful: but see what lurks behind it.” He explains in a passage also included in the stage version:

The demand of the loveless and the self-imprisoned that they should be allowed to blackmail the universe: that till they consent to be happy (on their own terms) no one else shall taste joy: that theirs should be the final power; that Hell should be able to veto Heaven.

Lewis is wading into very deep waters. This production is not for young children, so parents should not confuse this artistic creation with Narnia. But it was, and is, an excellent theatrical event that forces the audience to turn inward and consider their own priorities in this life and the next.

The Great Divorce has closed in Washington but will appear in eleven other cities across the country. Moreover, FPA will be bringing a new production to the stage in the not too distant future, something like Martin Luther on Trial in which various historic personages, including a stand-in for Pope Francis, will engage Luther on a variety of issues. According to Max McLean, in response to a question in a post-production session, “maybe we will effect a Lutheran-Catholic reconciliation.”

G. Tracy Mehan, III, was assistant administrator for water at the US EPA under President George W. Bush. He is a consultant and an adjunct professor at George Mason University School of Law and Contributor to The American Spectator’s website, Spectator.org, where the above article was first published. It is reproduced here with the permission of the author and The American Spectator.