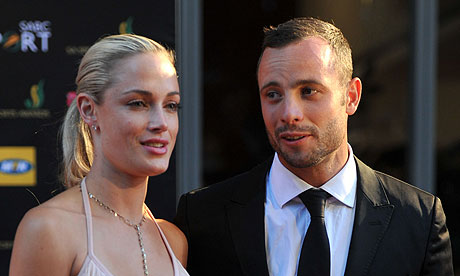 To the amazement and disbelief of the world, London Olympic hero Oscar Pistorius is in police custody today with the prospect of spending a life sentence in prison for the murder of his girlfriend Reeva Steenkamp. Meanwhile, revisionist histories of the man, along with cultural profiling of his homeland South Africa that might help explain his “fall from grace” are pouring in, although none of them goes to the heart of the matter.

Now we learn that the famous Blade Runner is a man with a darker side, a furious temper and an altogether combustible character that big media has ignored up until now. In South Africa, however, he hit the headlines in December after allegedly threatening to break the legs of a man rumoured to be a rival for one of his girlfriends. It is not clear whether this was Steenkamp.

He is a gun enthusiast, like many South Africans, but shooting is almost an obsession with him, it seems. He has difficulty sleeping (something to do with taking steroids?) and would sometimes go to the gun range during the night. He plays war games in his own house: “Nothing like getting home to hear the washing machine on and thinking it’s an intruder to go into full combat recon mode into the pantry,” he tweeted last November.

Friends have said that his risk-taking and sleeplessness seemed out of control, reports The Independent. “In 2009 he was lucky to survive after crashing his speedboat. A motorbike accident left one of his prosthetics hanging from barbed wire.”

Combustible, indeed. Attractive and celebrated as he was, a girlfriend would have experienced that sooner or later and stepped back.

“His tumultuous romantic life has been a staple of local gossip pages,” says the Independent, “but some incidents went largely unreported. While no charges were pressed, police sources were aware of at least one other complaint of ‘abuse’ from a young woman who had been dating the athlete.”

This fits with reports that he had rows with Steenkamp at his home, to which the police were called. Neighbours also heard shouting from the house earlier in the evening that she died with four gunshot wounds in her body.

There’s a hint here, surely, of the fundamental wrong turn that led to this tragedy. Why do some men get violent towards girlfriends and partners (as distinct from wives)? Usually because of jealousy. He senses there is a rival for her affections when he thought, or hoped, they belonged completely to him. When he imagined he had a right to them.

According to an uncle, Oscar Pistorius had a heavy investment in his relationship with rising star Reeva Steenkamp, even though it had started only in November. “They had plans together and Oscar was happier in his private life than he had been for a long time,” said Arnold Pistorius.

It is possible that Steenkamp, already 30, was looking for a husband and initially considered Pistorius a good match. At the same time the 26-year-old Olympic champion might have been looking not only for a “trophy wife” but a woman who could turn the fortress where he lived into a home and give him the emotional stability that he clearly lacks. Is it too far-fetched to think that the young man who heroically overcame a huge disability largely through the insistence of his late mother badly needs a replacement for her staunch feminine presence?

But whatever their expectations were of each other after barely three months, they were already confused by the sexual relationship that, clearly, had already started — a type of relationship that nearly everyone expects these days and that no-one ever questions, even when the results are fatal, as they not infrequently are.

Here are the contributing causes that various commentators have identified so far: gun ownership (1 in 20 South Africans owns a registered firearm, and millions of others circulate illegally because of the fear of violent crime); drugs (it has been suggested that Pistorius killed Steenkamp in an outburst of “roid-rage”, that is, steroid fuelled rage); the violence towards women that is “endemic” in South Africa.

There is a sad irony about the last item. Women in cohabiting relationships are far more likely to be abused or killed than married women — by a factor of 9, according to one study — and yet cohabitation rates have increased sharply in South Africa as in other countries. There, as in the US, Europe or Australia, pre-marital sex, which often leads to cohabitation, is also taken for granted.

In other words, uncommitted sexual relationships are virtually the norm for women around Steenkamp’s age. (She had previously cohabited with a boyfriend.) Of course, they do not all lead to violence, let alone death, but they delay and complicate the quest for a spouse and have many other unhappy consequences.

This is the fundamental mistake that the two South African stars made, and no-one wants to mention it. Sex implied things that neither of them could mean, even if, for fleeting moments, they imagined it did. One of them took the implications far too seriously and it all ended in tragedy, one young life lost and the other in ruins.

Why do we accept this trend? Why do we not warn young women and men of the downside — and the downright dangers — of giving themselves bodily and emotionally to someone they barely know? Why do we not give them the dismal statistics before they start experimenting, and the values and character training that will set them on the path of real friendships and marital commitment? Social silence on this matter means social guilt.

Could sexual restraint be too hard for a young man who learned to run like the wind on carbon fibre blades? Would it be beyond a young woman who managed a law degree, a modelling career and jumping off a cliff in Jamaica? Surely not. Continued failure to demand it of the young makes one an accessory after the fact.