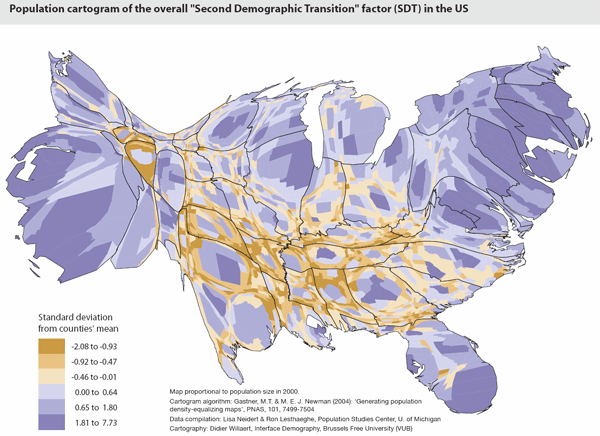 How much did you hear about the culture wars in the 2008 election? I suppose that it depends on which newspapers and blogs you read. But by and large the pundits described it as an "it’s the economy, stupid!" election. The financial crisis preoccupied voters, so much so that it is unsure whether the culture wars will be a potent electoral issue in 2012.

But a study by geographers Ron Lesthaeghe and Lisa Neidert on NewGeography.com indicates that "cultural" issues are no less important to voters. They analysed the results of the election county by county and found that people were even more concerned about them in 2008 than they were in 2004.

The geographers say that Democrats tend to support "unconventional forms of family formation – cohabitation; children born to cohabitors; postponement of partnership, marriage and parenthood to much later ages; acceptance of interference with fertility through abortion and efficient contraception" Republicans tend to support "classic forms of family formation – early marriage and parenthood – and more conventional gender roles".

When they crunched the numbers, it turns out that the correlation between counties with unconventional families and the Democrats and counties with classic forms and the Republicans was stronger than ever.

"Moreover, that statistical link remains highly significant after controlling for competing explanations based on the degree of urbanity, income and education levels, ethnic and religious composition, and relative size of immigrant populations. And Appalachian and Southern counties, which were not following the fit so closely in 2004, now conform much better to the overall pattern."

Lesthaeghe and Neidert conclude that "the US continues, therefore, to be a textbook example of spatial connections between demographic innovation and political orientation." So it appears that family issues will continue to affect American elections. It’s too early to say whether it will be as important in 2012 as it was in 2008, but strategists ignore it at their peril. ~ thanks to Brad Wilcox