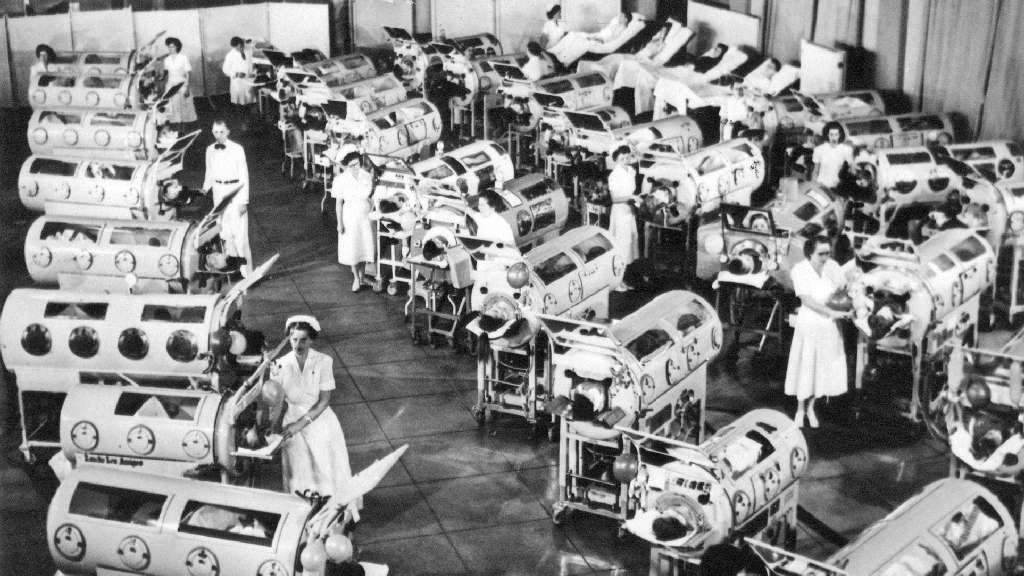 It used to begin with a stiff neck and a bad headache and fever and weak legs. The worst part was being in hospital away from your parents, who were frantic, of course, because so many kids were paralysed and dying in another polio epidemic. Just about every summer in the 40s and 50s there would be one somewhere. People were scared stiff. Don’t drink from bubblers. Avoid swimming pools. Stay away from movie theatres. And there was no cure.

Oddly enough, the culprit was cleanliness. In backward times babies crawled around in polio-laden dirt and filth. After a brief bout of flu-like symptoms they became immune. But 20th century American babies were starchy-clearn and never became infected. When the disease struck unimmunised children and adults, it struck hard. In 1952, the disease’s last hurrah, there were 58,000 cases. About 3,000 died of suffocation when their respiratory muscles became paralysed. About 21,000 ended up with leg braces or wheelchairs after the disease destroyed nerves and left muscles withered and bones stunted.

Then in the late 50s came the Salk and Sabine vaccines and suddenly it was game over for poliomyelitis, at least in the United States. It became a forgotten disease. You only read the word polio in the newspaper nowadays when it flares up in distant cities  overseas with hard-to-remember names — although in recent years some survivors complain of a mysterious fatigue which doctors call post-polio syndrome.

But for a handful of Americans post-polio syndrome was literally all-encompassing. They had the worst kind, bulbo-spinal, which destroyed the nerves which controlled their breathing. An iron lung had to breathe for them and they ended up spending whole lives inside a gigantic mechanical jelly roll.

Dianne Odell was the last of them.

It was 1950 when Dianne caught polio in Jackson, Tennessee. She was three years old. After an epidemic struck, hospital wards were full of the deafening racket of rattling machines with small children inside. After a few weeks, many polio children started breathing on their own and left. Dianne never did. She lived the rest of her life in her 7-foot, 750-pound “yellow submarine”.

“I remember how much my legs hurt and I went to Mama and told her,” she wrote in an unfinished autobiography. “I never walked again after that. I screamed from the hot towels they put on my legs. I remember a lot. I asked my daddy, ‘Will I have to live in this thing always?'”

At first, the answer was no, not always. Initially, she could spend three hours outside it every day. When she was 13, she used one of her brief escapes to be baptised in her parents’ bathtub. But after 20 or so, home was an iron lung in a small house.

The iron lung wheezed and throbbed 24/7. An electric pump regulated the pressure in her chest and forced air in and out of her lungs. Dianne would lie on her back, with her head protruding from one end of the airtight torpedo. She stared overhead at a mirror hanging above her face so that she could peer around her room. Through a window in her room she could see the tops of trees in the yard.

An iron lung is a simple contraption, no more complicated than a washing machine. The main problem is ensuring that the electricity which keeps the pump running never goes off. In 1957, a storm knocked the power out and her family and rescue workers had to pump by hand. It happened again in 1974. Eventually, in 1995, the Tennessee Valley Authority donated a generator which was supposed to kick in automatically if the power failed.

Her parents never thought of institutionalising her. She was their daughter. No one ever mentioned euthanasia. They fed her and cleaned her and monitored the throbbing machine. Over a two-way radio Dianne attended the local high school and even tried to attend Freed-Hardeman University. She never finished, but it gave her an honorary doctorate in psychology anyway. She wrote a children’s novel which sold 100,000 copies and tutored children and campaigned over the phone for politicians she supported.

She had a sunny disposition which her disability and constant pain could not crush. “Don’t you ever ask, why me?” people would say. And Dianne would answer in her deep Southern drawl, “Why not me? Who am I?” Celebrities came to be photographed with her and to glimpse something of the grandeur of the human spirit. Tennessee’s favourite son, the inventor of the internet and former Vice-President, Al Gore, gave her a kiss.

One of her cherished sayings was “no man is poor who has friends”. “If that’s true,” she used to say, “then I must be the richest woman alive, and bells are ringing all over West Tennessee, for there are many angels among us. When you have faith, family and friends, you have more than enough to get you through any rough times in your life.”

She needed those friends. Her family was not wealthy and her parents’ health was bad in recent years. Medicare refused to foot the bill for her care because Dianne couldn’t tick the boxes next to skilled nursing care, physical therapy, speech therapy or occupational therapy. So the American can-do spirit took over and friends, admirers and the local church organised fund-raisers to support her.

She was the last surviving American to use an iron lung. In the 50s, a positive pressure ventilator was developed which gave other patients more mobility. But Dianne’s spine was curved like a gigantic S and she couldn’t use it.

Year by year the number of iron lung users in the United States declined. Some switched to the newfangled technology; others died. Iron lungs were no longer a money-making proposition. One day Dianne received a letter from the owner. It read: “Due to the age of these products, effective no later than March 1, 2004, Respironics Colorado will no longer be able to procure service parts to support or repair these devices.” The company gave Dianne her device and somehow loving family and friends found the parts to keep it running. Her life depended on it.

On May 28, at 3am, a thunderstorm knocked out the power to her house. Then the emergency generator failed. Dianne Odell died as her father and brother-in-law took turns pumping the iron lung in which she had lived for 58 years.

One of the famous people in her life, actor David Keith, a fellow Tennesseean, summed up her life: “Dianne was a window through which you could see the way God intended the world to be.”