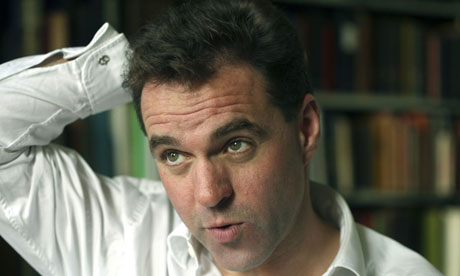 Conservative economic historian and media star Niall Ferguson (pictured above) touched a raw nerve this week with the gay lobby. He was addressing a gabfest of millionaire investors in California when he made an unscripted remark. It ran something like this:

“Ferguson asked the audience how many children Keynes had. He explained that Keynes had none because he was a homosexual and was married to a ballerina, with whom he likely talked of ‘poetry’ rather than procreated.”

The response was as immediate and impassioned as North Korea’s threats to turn its southern neighbour into “a sea of flames”.

The media artillery barrage moved in stages from simple outrage at the implication that gays were indifferent to future generations, to repudiations of Ferguson’s immediate and forthright apology, to sneers at his economic competence (the tail end of his “awesome arc of insanity”, according to Paul Krugman in the New York Times).

It culminated in the full Monty, a 7,800 word review by a professor at University of Missouri-Kansas City of Ferguson’s degeneracy, his dishonesty, his economic incompetence, his political conservatism, his documented homophobia dating back to 1995, and so much, much more.

The firepower lobbed onto Ferguson would have made Kim Jong-un proud.

But what exactly was the problem with what Ferguson said? Parsing his words – as reported by a very indignant reporter – he implied four things:

1. Keynes’s ideas were flawed. This is widely accepted by many economists today, certainly by those of a neoclassical bent. In fact, he was probably invited to speak at the conference to dump on the Keynesian-inspired stimulus of which the Obama Administration is so proud.

2. Keynes was gay and not interested in children. There’s no disputing that Keynes was a homosexual, or at least a bi-sexual. He married at 42 and had no surviving children from his marriage to the Russian ballerina Lydia Lopokova. Whether or not his heart melted at the thought of the pitter-patter of little feet is largely surmise.

3. Our care for the future comes through utility derived from our descendants. This is a standard economic assumption.  Economists assume that everyone is selfish and only cares about his private consumption. In models of economies over time they assume that we care about the welfare of our children, our children’s children, and so on. Is this reasonable? Evolutionary biologists will tell you that it is. And it is reasonable from a Darwinian point of view to ask whether a homosexual economist would have as much interest in the welfare of future generations as an economist with a large family.

As British journalist Brendan O’Neill pointed out, there is one sense in which Keynes cared deeply about future generations. He was a fervent eugenicist and served as the director of the Eugenics Society in Britain from 1937 to 1944. None of the Ferguson’s critics mentioned this.

4. Keynes’s ideas were influenced by his sexual orientation. This point also cannot be known definitively, but it is hardly homophobic. Why wouldn’t our sexual orientation (whatever it is) influence how we think about the world? We all see and interpret the world around us through a theoretical lens.

No, the vehemence of the reaction to Ferguson’s remarks has little to do with what he said. The real problem is the hyper-sensitivity of the gay community to the least slight.

For instance, there is another group which has been treated even more viciously than gays for the crime of not caring about future generations. And none of the gay community’s Pretorian Guard has leapt to their defence. Critics have excoriated them as self-absorbed, solipsistic, and smug, as entirely “focused on economic self-interest” and “unwilling to sacrifice for the good of the country”.

I’m talking about the baby-boomers.

Why haven’t the critics of the selfish brats of the “greatest generation” been flooded with a “sea of fire”? Instead, the baby-boomers have become the whipping boys of popgun economists in the media. Compared to the vilification meted out to baby-boomers, gays have escaped scot-free.

Even though Niall Ferguson is Laurence A. Tisch Professor of History at Harvard University, a tenured position, I would not be surprised if he is forced to step down over his 40-word remark. Some of the comments under his “Open Letter to the Harvard Community” were already suggesting that “bigots” like him do not belong at Harvard. “No, the question must be posed,” said one. “Is it the policy of the Laurence A. Tisch foundation to underwrite the chair of the Professor of History at Harvard University whose current chair has brought disrespect to Harvard and the Tisch Foundation whose funding they underwrite?” After a similar row over a sexist remark a president of Harvard, Lawrence H. Summers, was forced to resign.

Long, long ago — about three years ago, that is — homophobia was a hanging offence. What the Ferguson imbroglio proves that you will be invited to a necktie party for mere homoscepticism as well.