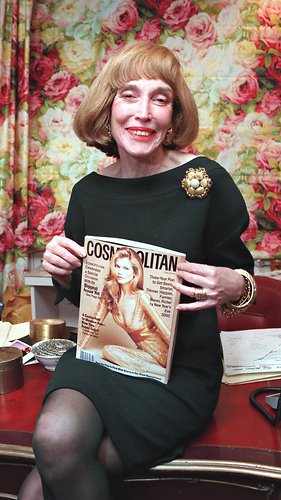 Helen Gurley Brown, the former editor of Cosmopolitan who died this week at the age of 90, is famous for putting sex on the cover of the women’s magazine — and in the middle, at the end, and at several points in between. Her career with the magazine, which lasted until her death, was based on the quintessentially 20th century notion that sex should be fun — for women as well as men — and not confined to marriage. Girls could have office affairs and still ace their job and “land that man”.

That was the Gurley Brown brand, first launched on the popular culture market in 1962 with the publication of her “pippy-poo little book”, Sex and the Single Girl, and adopted in varying degrees by most women’s magazines ever since. There were, and are, other things in the Cosmo package: work, money, fashion, health… But, first and foremost, it was about sex: how to look sexy, how to have sex, with whom to have it (married men fair game), how to recover from it, and, ultimately, how to bag a man for keeps.

Millions of women have bought the brand over the past 50 years and we are now in a position to judge just how good it is. “I would want my legacy to be, ‘She created something that helped people’,” Ms Gurley Brown said when surrendering the editorship of the US edition of Cosmopolitan in 1997. “My reader, I always felt, was someone who needed to come into her own.”

Have young women come into their own by following her advice? Have they got their man? Have they kept him? Have they had fun?

In 1960, 72 per cent of adults in America aged 18 and older, including Ms Gurley Brown herself, were married; today barely half are (51 per cent in 2010). That figure includes remarriages after divorce, which doubled between 1965 and 1974 and ravaged the family life of a generation. Divorce has been a quick path to impoverishment for millions of women and children.

Ms Gurley Brown had no children and did not want any, but she would be the first to agree, surely, that struggling to raise children on a low income is not much fun.

Fewer “girls” (as the Cosmo editor liked to call them, to the fury of serious feminists) are landing their man and, with the average age at first marriage (note that, “first”) rising (28 for men, 26 for women) many are doing so at ages well beyond girlhood.

Well, the Cosmo club might say, “There are more ways of holding onto a man than marrying him. Living together is just as good.” No it’s not. Cohabiting relationships are much more fragile than marriages. A recent Australian study, for instance, shows they break down at 3 to 5 times the rate of marriages. Where there are children, this gives the next generation of girls and boys a shaky start in life, and it’s not much fun for the adults either, even without kids; ask a couple that have just broken up after living together for six years and had to cash up their house and furniture and start again, while nursing a broken — or at least seriously disillusioned — heart.

It seems likely, then, that the joy of sex has been short-lived for many of the generation or two of women who have been sold the Cosmo brand. And the worst of it is that it’s the women who need marriage most, in a social and economic sense, who have lost most in the gamble of sex before marriage.

When Ms Gurley Brown wrote Sex and the Single Girl around 1960 the contraceptive pill was just coming on the market and this perhaps accounts for the insouciance with which she approached her theme. The pill was supposed to remove the most obvious risk of extra-marital sex as well as the standard remedy of the “shotgun” marriage. Abortion was legalised to stop the gaps in this theory. Even so, women continued to have children before getting married, and, increasingly, without getting married at all.

But it was not the daughters of the social class that the editor of Cosmopolitan (and its publisher) mixed with at evening soirees — upper middle class college graduates — who began to swell the numbers of single mothers; it was young women from poor and (like her own) modest backgrounds. In the early 1960s around 10 per cent of babies in the US were born out of wedlock; today the figure is 41 per cent. But less than 10 per cent of births to college-educated women occur outside marriage, while among women with high school degrees or less the figure is nearly 60 per cent.

Marriage is disappearing from Middle America leaving increasing numbers of women struggling to bring up children on their own (more or less) and the sex-for-fun ethos has played its part in this dismal trend. Respect for marriage has diminished — nearly four out of ten Americans in Pew’s 2010 survey said marriage was becoming obsolete, and yet the same survey found that most people who had never married (61 per cent) would like to do so one day.

Clearly, the Gurley Brown sex recipe has failed: for so many it has resulted in no man of your own, no marriage, and in all likelihood very little fun.

The great irony in all this is that Helen Gurley Brown herself married — though, at 37, late for her era — and stayed married to the same man, movie producer David Brown, until he died in 2010. In fact if you look at her personal life — and ignore some of the bragging about past affairs — there’s a whole different recipe for success there for the modern girl.

But on closer inspection, I’m Wild Again is a strangely inapt title and a poor description of Brown’s life. She’s not wild again (and she may never have been very wild in the first place). This is the autobiography of a puritan. Wild chronicles how Brown exercises obsessively; doesn’t drink, smoke, or eat; has remained utterly faithful to her husband of 35 years; and lives for her job. The Cosmo girl’s dirty little secret isn’t sex. It’s work.

Although she encouraged cavorting with married men, Plotz points out, she was too busy to do it herself. She worked 12-hour days on the magazine and lived her gospel of self-improvement to a puritanical degree. Between Cosmo’s sex talk and seduction was sound advice to the secretaries and beauticians who read the magazine: “Get out and do it, kiddo!” she told them. Work hard, be punctual, be tough, don’t fear competition, save your money.

Self-made people can be ruthless. Perhaps Helen Gurley Brown was. Certainly she dished out a lot of bad and harmful advice about how young women could “improve” themselves. Unfortunately that obscured some very good messages: be ambitious, work hard, dress up, marry — and stay married. Let’s remember her for that.