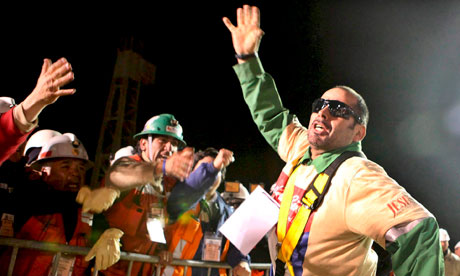 That’s how one utterly overwhelmed commentator on television described the dramatic around-the-clock rescue operation we’ve just witnessed in Chile. Searching for superlatives, some journalists just said…..there are no words to describe this or express what is happening here.

He had spent 69 exhausting days trapped far below the Earth’s surface. So when Mario Sepulveda was finally rescued early Wednesday, he bear-hugged Chilean President Sebastian Pinera, danced a victory jig and punched his fist into the air while leading rescuers in a cheer that summed up the elation in this country.

In a mesmerizing story of grit, endurance and triumph, the 33 men who had been stuck underground since their mine collapsed on Aug. 5 were hoisted to the surface, one by one, in a rescue celebrated across Chile and watched on live television worldwide. At 10:54 p.m., the last of the miners, Luis Urzua, the stoic foreman, was lifted from purgatory, capping off a flawless operation that lasted less than a day.

“I was with God, and I was with the devil,” Sepulveda, 40, said upon reaching freedom. “They both fought for me. God won.”

Sepulveda then bounded into a field hospital, hugging journalists, nurses and rescue personnel and saying “Thank you, thank you” to anyone within earshot. Stopping for a moment to talk, he told The Washington Post that he never doubted he would be extricated from the 2,000-foot-deep hole that he and the others called home for 10 weeks.

“We always knew that we would be rescued,” he said. “We never lost faith.”

The men emerged from the Phoenix rescue capsule wearing a shirt that read ‘Gracias, Senor’ (Thank you, Lord) on the front and bore the name of Jesus on the sleeve. Rosaries were at the site, sometimes around the neck of a loved one waiting for their miner to arrive to safety. One wife clutched a large canvas with a colorful image of Our Lady of Guadalupe. When her husband finally stepped out of the cylinder before a jubliant and cheering crowd, he first dropped to his knees and prayed fervently, before finally raising his arms and embracing his wife so tightly, you could feel it just looking on.

Avalos’s wife, Monica, said her faith, and that of her husband, saw them through the ordeal. She had waited for him day after day at the makeshift camp – called Esperanza, or Camp Hope – with the families of other miners and hundreds of journalists. “God was always present,” she said. “It is a miracle. This rescue was so difficult. It is a great miracle.”

This is when big media do their best work, and it has been riveting. Journalists I’ve seen report expertly from New York after 9/11,  the frontlines of war, the aftermath of Hurricane Katrina, the earthquake in Haiti and seemingly countless other disasters, tragedies and staggering events admitted they struggled to tell this story, the story they were witnessing, and to keep their own emotions in check.

In my own little orbit of personal contacts and emails and radio and Facebook, I’ve encountered the same phenomenon….we couldn’t turn away from our screens or radios and when we had to, hurried back as soon as we could to catch up with which miner was just rescued and how many more were yet to come and how it was going. Not once did it ever get so familiar that we tuned out or relaxed our reflexes or even looked away for more than a moment. When I had to attend a function on Wednesday evening, in the final hours of this fantastic drama, I listened to the coverage by satellite radio. What was missing in the pictures was made up for in the theater of the mind…

As each miner surfaced and reacted with support teams and family members around him, a translator tried to keep pace, repeating in English what they were saying at the scene. But later, on my return, when they were nearing the final triumphant miner’s rescue, the crowd’s emotion intensified and so did the journalist’s. They broke into a chant which he first tried to translate, and then he chokingly broke into emotional song with them. In the buzz of the crowd afterward, I heard soft crying, and choked back tears myself.

Didn’t work for long. Tears came. Tears of joy when I heard the dramatic departure of the last miner from the dungeon they were trapped in after the collapse in August, the man who had only begun mining two months before the accident but quickly stepped into a leadership role establishing order and teammanship among the trapped men. His ascent was cause for the building emotion up above, and I knew I’d make it home just in time to see him emerge, and it was dramatic.

As the world waited….and the world was tuned in and riveted….reporters recounted what the miners wrote in notes sent to the surface over the weeks and months. “Never lose hope,” wrote this supervisor. “We’re thankful for such simple things,” he reassured the team above.

And a reporter on scene around the clock said each man who emerged over the two day operation, without fail, hugged a loved one waiting for him with an indescribable embrace. “This is about devotion and dedication to family,” said the reporter. “The strength of that bond is the real story here.”