In their 2011 State of Our Unions report (When Baby Makes Three: How Parenthood Makes Life Meaningful, and How Marriage Makes Parenthood Bearable) W. Bradford Wilcox and Elizabeth Marquardt found, like other researchers, that parenthood is typically associated with lower levels of marital happiness among contemporary couples. But that is not the whole picture by any means, as they explain in the following excerpt from the report, subtitled, “Family Size, Faith, and the Meaning of Parenthood”.

Given the negative association between marital happiness and parenthood, one might expect that the least happy husbands and wives would be parents of large families. Not so.

In a striking finding, it turns out that the relationship between family size and marital happiness is not linear, but curvilinear (see Figure A1). In other words, according to the Survey of Marital Generosity, the happiest husbands and wives among today’s young couples are those with no children and those with four or more children.

FIGURE A1. PREDICTED PROBABILITY OF BEING “VERY HAPPY” IN MARRIAGE, BY NUMBER OF CHILDREN AT HOME 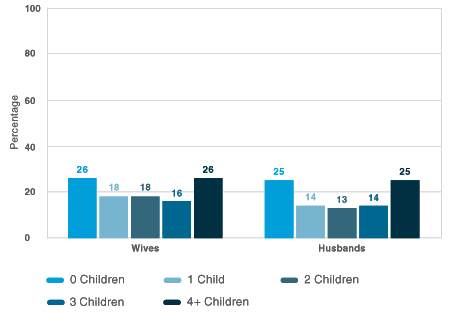 What accounts for the surprisingly higher levels of marital bliss among parents of large families, given the obvious financial, practical, and emotional challenges of raising a large family in contemporary America? This finding seems to be largely a “selection” story, in which particular types of couples end up having large numbers of children, remain married to one another, and also enjoy cultural, social, and relational strengths that more than offset the challenges of parenting a large family. In this case, the Survey of Marital Generosity suggests that fathers and mothers of large families are partly happier because they find more meaning in life, receive more support from friends who share their faith, and have a stronger religious faith than their peers with smaller families.[1]

Take religious attendance. Figure A2 shows that the parents of large families are about twice as likely to attend church, synagogue, or mosque on a weekly basis or more often. It is certainly possible that having a large family can bring some people to their knees! But it is also likely that highly religious men and women feel called by God or encouraged by their religious networks of friends and family members to have large families.[2]

FIGURE A2. PREDICTED PROBABILITY OF FREQUENTLY ATTENDING RELIGIOUS WORSHIP SERVICE, BY NUMBER OF CHILDREN AT HOME 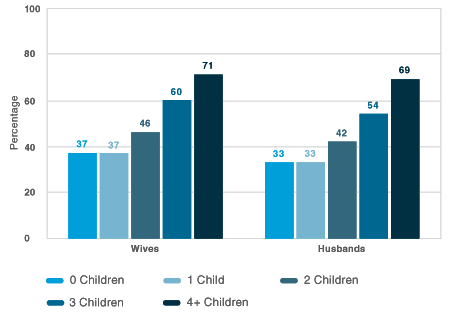 Or take meaning. Figure A3 shows that the parents of large families—especially mothers—are more likely to strongly agree that “my life has an important purpose,” compared to their married peers with smaller families or no children. Meaning undoubtedly flows from the additional texture that each child adds to both parents’ lives, but it’s also likely that men and women who have a strong generative sense that their lives are endowed with meaning are also more willing and interested in having many children.

FIGURE A3. PREDICTED PROBABILITY OF “STRONGLY AGREEING” THAT THEIR LIFE HAS AN IMPORTANT PURPOSE, BY NUMBER OF CHILDREN AT HOME 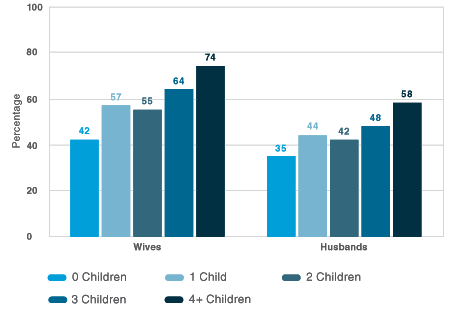 Couples with large families—specifically those who are more likely to have a strong faith, a sense of meaning in life, and the social support of religious friends—also seem able to handle the challenges of parenting a large family without witnessing a drop in marital quality. The cultural and social resources at their disposal seem to make them happier spouses than peers who do not have these resources.

FIGURE A4. PREDICTED PROBABILITY OF WIVES BEING “VERY HAPPY” IN MARRIAGE, BY NUMBER OF CHILDREN AT HOME AND RELIGIOUS SERVICE ATTENDANCE 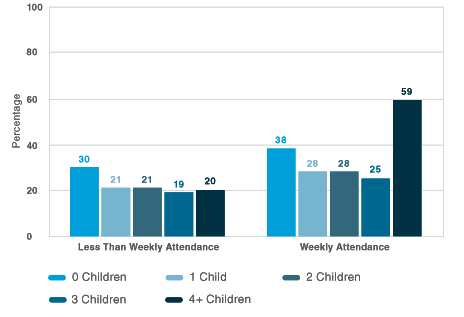 A skeptic might speculate that religious mothers of large families have no choice but to put on rose-colored glasses when describing their own marriages, given their practical dependence upon and moral commitment to marriage. Perhaps this is true.

But, given the religious meaning, social support, and normative importance attached to marriage by men in many religious communities, it seems likely that part of what is happening is that religious mothers of large families benefit from having particularly attentive husbands.[3] The Survey of Marital Generosity indicates that their husbands are more likely to engage in regular acts of generosity—such as making coffee in the morning for their wives or frequently expressing affection—and to spend more quality time with their spouses compared to other husbands.

While few Americans wish to have nineteen children, the blend of religious faith and social support depicted in 19 Kids and Counting may come closer to the reality of today’s large families than the equally exotic but ultimately tragic way of life brought to the small screen in Jon & Kate Plus 8.

W. Bradford Wilcox is an associate professor of sociology in the University of Virginia College of Arts & Sciences and director of the National Marriage Project. Elizabeth Marquardt is the director of the Center for Marriage and Families at the Institute for American Values. The excerpt above is reproduced here with permission.