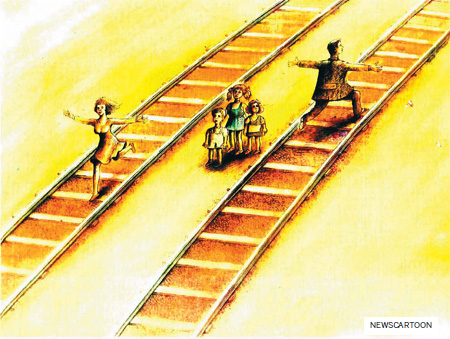 Some see it as a sign of greater freedom in China and
therefore progress, but not all Chinese are happy that the divorce rate is
burgeoning, reports China Daily.

Shu Xin, director of the China Marriage and Family Affairs
Consulting and Research Center, a nongovernmental organization, warns about the
negative effects on children and the “public security” issues arising from enmity
between ex-spouses and even “extremes in revenge”.

Traditional family values are being discarded, and parents
no longer care as much about their children:

Under those social standards, Shu said, if it came to
divorce, “the couple would rather give up anything to fight for custody of
the child. But nowadays, many couples consider the children as barriers for
their remarriage. As long as they can get rid of the burden, they would love to
provide more economic compensation.”

Already family breakdown has made inroads on children’s
wellbeing:

A recent survey of 5,000 younger students at 70 Beijing
middle schools showed that at least 20 percent have psychological problems in
varying degrees. And 65 percent of those students come from single-parent
families.

These kids have a lot of problems, Shu said. “However,
tracing the sources, all are family problems. The development of juveniles
needs care from both parents. It’s indispensable.”

Interesting, isn’t it, that such sensible comments get
reported in an official newspaper. Here’s a bit more:

Shu admits he has no data, but he suspects that extramarital
affairs are responsible for 70 percent of divorces. He sees infidelity as
evidence of moral decline and the collapse of social restraints on unacceptable
behavior.

Read his example of how this happens in the original article.

Beijing lawyer Wang Xiuquan points out that heavy workloads,
use of the internet and increasing social activities also drive couples apart
and present opportunities for extra-marital affairs. Mature women with
independent financial resources –often earning more than their husbands — are
among his main clients.

The divorce process is very simple: Both parties present
their hukou (residency permits), ID cards, marriage certificates, divorce
agreement and passport-size photos. They pay 9 yuan ($1.39) and the worker
stamps the divorce certificate in red. The marriage is over.

Marriage and family counselling is available and the article
ends with references to what other countries are doing:

Many countries also take such steps. The United States, for
example, launched a Healthy Marriage Initiative five years ago to encourage
marriage education and consultation programs.

In South Korea, the court will not accept a divorce
application immediately. It gives the couple some time to think over their
decision – often a month for a couple without children, three months for a
family with children.

The US is still ahead on some things, it seems.