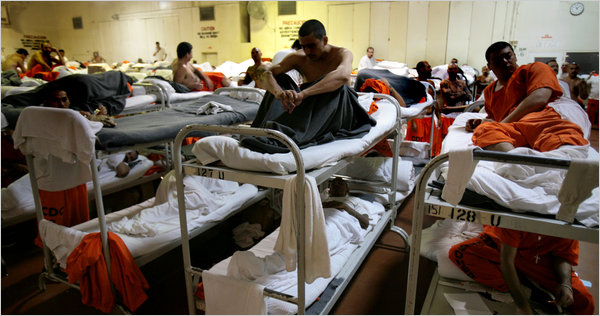 This is the second
of two articles on Brown v. Plata, the May 23 US Supreme Court decision that
affirmed that California must greatly reduce its inmate population in the next
two years. The first article explained how federal courts can tell states what
to do in prison matters under the US Constitution. This article focuses on the
weaknesses of the ruling itself.

At the time the
two cases on appeal in Brown were tried in 2008, California’s prisons held
almost twice as many prisoners as they were designed to hold. The district
courts ordered California to reduce the number to a limit of 137.5 percent of
capacity. The difference between the then-current population and the limit
imposed by the federal courts was huge, approximately 46,000 inmates. Since the
trial, the state reduced the number of prisoners by 9,000, so its prison system
must achieve a net reduction of 37,000 more. The courts have given California
two years to comply, with leave to seek more time if it can demonstrate the
need.

The two lawsuits
that went up to the Supreme Court claimed that California was violating the
Eighth Amendment’s ban on “cruel and unusual punishment” because
inmates could not obtain minimally decent health care. (One class focused on
physical care; the other on mental care.) It has been settled law since the
1960s that a serious lack of basic medical care represents a violation of the
Eighth Amendment. “A prison that deprives prisoners of basic sustenance,
including adequate medical care, is incompatible with the concept of human
dignity and has no place in civilized society… If government fails to fulfill
this obligation, the courts have a responsibility to remedy the resulting
Eighth Amendment violation.” Brown v. Plata, Part II.

Although several causes of the violations were identified in the trials
of the cases, the trial judges focused on overcrowding. The judges ruled that
the sheer number of inmates overwhelmed the ability of the prisons to provide
minimal care. There was no room for doctors and nurse to work; there was no
space for sick inmates to recuperate from serious illness or injury; there were
too few medical personnel to see all seriously injured and ill prisoners.

In both the
lawsuits, remedies that were not as drastic as forcing the early release of
inmates were attempted first. In one of them, the State had been under orders
for specific steps to increase the availability of health care for over ten
years, without success. The district judges were plainly frustrated by the
failure of California to improve the health care it afforded to inmates
according to the mandates issued by the courts.

Unleashing a flood
of convicted criminals upon society greatly interferes with a state’s criminal
justice system and causes real risk of harm to citizens. Despite these
repercussions, federal courts have ordered reductions of prison populations
here and there across the country for several decades. By the 1990s it seemed
to many citizens that the federal courts were not as reluctant to do this as
they should be. Congress enacted and President Clinton signed the Prison
Litigation Reform Act of 1995 (the “Act”), 18 USC. § 3626, in order
to reduce such occasions to a minimum.

In certain
respects, the majority opinion in Brown v. Plata treated the Act as an obstacle
to be overcome rather than a law to be respected. Among other errors, the Court
failed to honor the requirements that overcrowding be found to be “the
primary cause of the violation of a Federal right” and that a release
order be entered only if “no other relief will remedy the violation of the
Federal right of a particular plaintiff or plaintiffs.” § 3626(a)(3)(E).

Remember that the
Eighth Amendment violation consisted of failing to provide minimum health care
to prisoners, not overcrowding per se. The 5-4 majority of the Supreme Court
recognized that overcrowding was not “the primary cause” but one of
several causes of that harm. “In addition to overcrowding the failure of
California’s prisons to provide adequate medical and mental health care may be
ascribed to chronic and worsening budget shortfalls, a lack of political will
in favor of reform, inadequate facilities, and systemic administrative
failures… Only a multifaceted approach aimed at many causes, including
overcrowding, will yield a solution.” Brown v. Plata, Part II.B.3. It
described overcrowding as the most important of these.

It is hard to
understand how the Court could find that overcrowding was “the primary
cause” of the lack of medical care when it admitted that there were
multiple causes that required a “multifaceted” approach. The language
Congress enacted into law implies that overcrowding must be identified as the
only primary cause, not one of the primary causes. To that objection made in
the dissents, Justice Kennedy’s majority opinion replies, “The PLRA should
not be interpreted to place undue restrictions on the authority of federal
courts to fashion practical remedies when confronted with complex and
intractable constitutional violations.” Id.

Notice that word,
“undue.” It is quite squishy. Who determines what is “due”
and “undue”?  Ultimately,
five judges of the US Supreme Court. One can only wonder with Justice Scalia in
dissent what makes those five unelected officials any wiser than the elected
representatives of the American people about what restrictions are
“undue.”

The Court also
failed to match the relief to the persons who were actually harmed, as the
statute requires. A release order is to be entered only if “no other
relief will remedy the violation of the Federal right of a particular plaintiff
or plaintiffs.” § 3626(a)(3)(E)(ii). As both dissenting opinions pointed
out, most of those who will benefit from a wholesale release of inmates are
healthy. Their rights have not been violated, and they do not need the relief.
The majority responded that healthy prisoners will unavoidably become members
of the aggrieved classes of sick and injured prisoners if overcrowded
conditions are not fixed. But did the statute say to release prisoners who are
at risk of becoming victims of constitutional violations in the future? The
majority answered “yes,” but the language of the statute rather
clearly answers “no.” The remedy is supposed to be for those who have
been harmed already.

The dissents
outline additional ways in which the majority paid little respect to the
directives of Congress in the Act, and readers will profit from their
expositions.

Justice Alito’s
dissent makes a telling point about the proper role of judges by quoting one of
the district judges as he reacted to a particular proposal for more limited
relief: “The only thing is we would be protecting the class members. And maybe
that’s the appropriate thing to do. I mean, that’s what this case is about, but
it would be… difficult for me to say yes, and the hell with everybody else.” It
is hard to find a clearer expression of a tendency to ignore the law in favor
of an amorphous sense of “justice.” Yet that did not seem to trouble
the majority of the US Supreme Court. While it did not explicitly ratify the
district judge’s comment, its insistence that it would not countenance
“undue” restrictions on the ability of courts to fashion relief
represented another way of saying the same thing.

The end result of
Brown v. Plata is that the Prison Litigation Reform Act will put less restraint
on judicial overreaching than Congress intended. That is not a good thing if we
intend to govern ourselves through our elected representatives. But ultimately
in our Republic we get the government we deserve, including the Supreme Court.
Electing the current President insured that he would appoint two of the five
justices that composed the majority in Brown v. Plata. It is hard to imagine that
two justices appointed by his opponent would have treated the case in the same
manner.

One more thing.
Citizens who complain, as this writer does, that the courts are taking over
their government may want to consider how much they themselves have created the
incentives for the courts to do so. Citizens in California and other states
have maintained prison systems in which a parade of horrible conditions can be
recounted in courtrooms to spur judges into action to prevent future abuses of
human rights. We cannot “lock ’em up and throw away the key” and
still meet our responsibilities as a civilized society. Those are yet men and
women that we are locking up. Justice Kennedy is surely right that a prison
“that deprives prisoners of basic sustenance, including adequate medical
care, is incompatible with the concept of human dignity and has no place in
civilized society.”

The responsibility
to insure basic human rights belongs in the first instance to the people and
their elected representatives. If they abdicate their responsibilities, it
should be no surprise that well-meaning judges will seek ways to solve the
problems, even if the consequences include overriding state sovereignty,
undermining self-government, and releasing tens of thousands of convicts into
the streets before their sentences have expired.