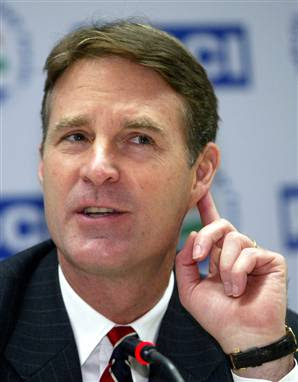 Actually, Indiana Sen. Evan Bayh made it perfectly and startlingly clear why he’s leaving Congress in the press conference he gave when he dropped that bombshell announcement. Washington is a mess, it’s broken, mired in partisan political bickering, and nothing’s getting done for the people. In fact, the business of running the nation’s affairs is just one more business that’s gone bankrupt.

Okay, he didn’t exactly say it like that. But he coyly said ‘I don’t love Washington.’ Join the club.

And he said more…

“For some time,” Bayh said, “I’ve had a growing conviction that Congress is not operating as it should. There is much too much partisanship and not enough progress; too much narrow ideology and not enough practical problem-solving. Even at a time of enormous national challenge, the people’s business is not getting done.”

Bayh gave glaring examples of where things have fallen apart — the failure of the deficit reduction commission after seven co-sponsors of the bill voted No, and the failure of the bipartisan job creation bill that had Republican support but was torpedoed by Senate Majority Leader Harry Reid…”

…just to name a few.

This hit hard. News media scrambled not only to cover it but to quickly try to interpret it (as if it weren’t clear enough) and analyze what Bayh’s eloquent repudiation of Washington really means for both parties and the Obama administration.

And for some reason, they’re still focusing the lens on what they continue to refer to as the “real” reason Bayh wants out of Washington.

The political retirement of Evan Bayh, at age 54, is being portrayed by various sages as a result of too much partisanship, or the Senate’s dysfunction, or even the systemic breakdown of American governance. Most of this is rationalization. The real story, of which Mr. Bayh’s frustration is merely the latest sign, is the failure once again of liberal governance.

For the fourth time since the 1960s, American voters in 2008 gave Democrats overwhelming control of both Congress and the White House. Republicans haven’t had such large majorities since the 1920s. Yet once again, Democratic leaders have tried to govern the country from the left, only to find that their policies have hit a wall of practical and popular resistance.

Washington has hit a wall, alright, but it’s at least temporarily blocked them from going over a cliff.

You can see this in bankrupt Greece, where government spends 52% of GDP; or in California and New York, where the government-employee unions have pushed tax rates to punishing levels and the states still can’t pay their bills. Americans can see that this is where Mr. Obama’s agenda is also taking Washington, and this is why they are rejecting it.

Can Mr. Obama still make a mid-course correction, a la Bill Clinton after 1994? Of course he can. What we don’t know is whether he has the political instincts and nerve to do so. As a creature of Chicago politics and the legal class, he has lived his entire life in precincts dominated by the political left. On the other hand, he says he is not “an ideologue.”

But then, he has said a lot of other things that didn’t turn out to be true.