The Oxford Dictionaries team sometimes have difficulty picking their Word of the Year. Last time, ‘omnishambles’ held off strong challenges from ‘Eurogeddon’ and Mobot’, all three of which now sound rather dated.

This year’s unanimous choice seems more likely to last. The winner was ‘selfie’, which Oxford Dictionaries define as ‘a photograph that one has taken of oneself, typically one taken with a smartphone or webcam and uploaded to a social media website’. Darth Vader took one last week, as did David Cameron. Anyone new to the selfie needs to know that the form already carries certain standards and expectations. Cameron, for instance, was immediately denounced for failing to look into the camera lens or adopt the correct facial expression – challenges which seem to have caused Darth Vader no trouble at all.

Dozens of how-to guides, criticisms of, reflections on the selfie have appeared. Apps to airbrush your selfie are being downloaded in their millions.

There is something unsettling about the idea of innumerable selfies being uploaded to the internet every minute, for other people to look at once they have finished taking their own selfie and uploading that. Sheer narcissism, some say, but that doesn’t quite capture it. To attempt a generalisation, each selfie does three things to varying degrees: it objectifies the selfie-taker, it creates a work of art, and it reaches out for social connection.

A camera can turn someone from a person into an object in a split-second. Keira Knightley, one of the most photographed people on the planet, has noted: ‘Australian Aborigines say that with every photo that is taken, a piece of your soul goes with it. And there are some days when I kind of believe that.’ Balzac, who was around for the invention of photography, feared that each photo was stripping him away, layer by layer.

Behind those superstitious fears lies a perfectly reasonable intuition about the power of photography. And the selfie makes it easy for objectification to become a social norm. In my experience, when someone puts a photo of themselves on Facebook, it usually prompts a genuine flurry of benevolence and good cheer. But then, my experience is limited by having been born in 1989. Compared with 2013’s teenagers, I might as well have been born during the Tudor period, as I discovered from an article by the year-11 schoolgirl Olympia Nelson. The atmosphere she describes – of ambiguity, competitiveness, and manipulation, in which complimenting a friend can be a way of advancing up the food chain – is nothing new. But the internet-age twist Nelson relates is:

This is a nightmarish kind of deregulated free market, in which the competitors end up offering their own objectified selves. When I put a picture of myself online, I am inviting others to put a value on me. And that value, as Nelson says with some understatement, is ‘not always sophisticated’.

In deregulated markets, it is not long before people’s worst instincts emerge, and not long after that the crash happens. One (hopefully unrepresentative) survey of British teenagers found that one in four had sent sexual images of themselves via text message.

‘Sexting’, another recent term for the dictionary-makers, overlaps more closely with the selfie than it might appear. A photograph of a person presents us with the same choice as a person does: we can use them as an object, or we can try to respect and love them as a human being. The internet has expanded in all kinds of interesting ways our opportunities for using each other. It specialises in vulnerability. And the selfie, at its worst, offers a particularly grim way for people to feed off each other’s vulnerability, projecting controlled images of themselves into a contest with the images of others.

That is only one side of the story, though, and it is worth saying a word in the selfie’s defence. 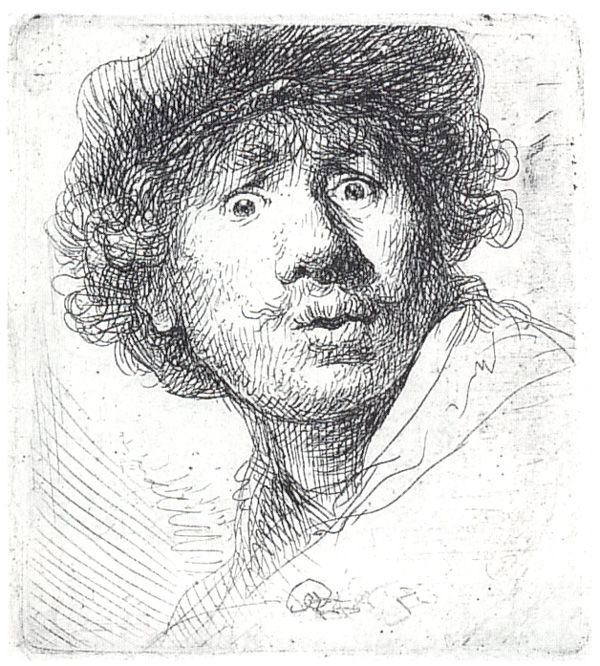 A selfie, after all, is a minor work of art, a new variety of self-portrait – though that is putting it generously. Think of Rembrandt’s dozens of self-portraits, for instance. Whether in the purposeful young man of 1629, or the distinguished but anxious figure of 1640, or the worn-out, unillusioned craftsman who appears in Rembrandt’s last decade – or in the etching where he recoils, startled, as though someone has just pushed a cameraphone in his face – these paintings approach, with subtlety and restraint, an individual who seems to slip away when you get close.

Seeing these paintings, you catch a strong hint of Rembrandt’s puzzlement and fascination with his own self: these are paintings both deeply honest and deeply mysterious. The selfie is usually neither. It is about self-presentation more than self-exploration.

Then again, self-portraits need not be made by great geniuses. Samuel Johnson gave a more homely justification for the portrait when urging his friend Joshua Reynolds to leave aside grand mythological subjects and paint living people instead. Portraits were not the ‘greatest’ form of art, Johnson conceded, but they might be the ‘best’, because of their social function. A portraitist uses their skill, as Johnson put it, ‘in diffusing friendship, in reviving tenderness, in quickening the affections of the absent, and continuing the presence of the dead’.

There you have probably the best thing to be said for the selfie. ‘Reviving tenderness’ is just what a photo of a friend can do, bringing them vividly to mind. The same goes for ‘quickening the affections of the absent’: when long-distance friendships are common, the selfie is a way of being present to someone thousands of miles away. There doesn’t seem to be anything wrong with wanting your friends’ attention and approval.

The trouble is that, needless to say, not everybody on the internet is your friend. If you go looking for validation from anyone and everyone, you may well end up suffering from what the commentator Nimrod Kamer calls ‘low selfiesteem’. The question to be put to every new invention is how it can serve human needs. And the internet does answer to many of them: for collaborative work, for knowledge and so on.

But while the selfie reveals one of the most important needs – for society, for friendship – it can only do a little to make people less lonely. Most of the answers to that problem are not searchable online.

Dan Hitchens is a DPhil candidate in English at Oxford University.

Dan Hitchens studied English at Cambridge University. He is currently a DPhil candidate at Oxford University, working on Samuel Johnson. His writing has appeared in Standpoint and the Times Literary Supplement,... More by Dan Hitchens