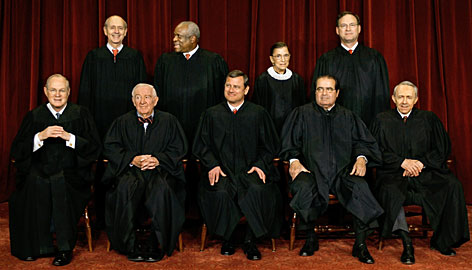 You’re looking at it. The Supreme Court.

It all comes down to that. Judges.

During a fall campaign dominated by the economic crisis,
debate over two wars and arguments over who is more fit for office,
discussion of how the next president will handle Supreme Court
nominations largely has been overshadowed. Even so, the differing
experiences of Obama, McCain and their running mates offer clues as to
how the candidates might approach vacancies on the bench.

More than experiences, their own statements have declared the
judicial philosophy that guides their view of law and the Constitution.
But other than this piece in USAToday, there’s been hardly a mention in
the media.

“People don’t realize how much is at stake,” says Walter
Dellinger, who as U.S. solicitor general under President Clinton was
the government’s top lawyer before the court from 1996-97.

“It is highly likely there will be (up to) three vacancies in the
next president’s first term,” says Theodore Olson, U.S. solicitor
general from 2001-04. “Justices serve on average 25 years. That’s six
presidential terms. They make life or death decisions.”

The two candidates take opposite views of that role.

Based on their backgrounds and outlooks, Obama and Biden
likely would be centrally involved in the selection process. Obama says
he wants a justice who will “stand up” for the disadvantaged.

Which means imposing their own personal ideologies on the matters
before the court, instead of impartially applying Constitutional law.

McCain and Palin likely would hew to the values of their
conservative base and seek nominees who would narrowly interpret the
law, rather than expansively construe it to solve problems of the
underdog. McCain has said he does not want judges who will reach out to
solve social problems that might be best left to elected officials.

That’s not the job of the federal judiciary. Obama believes it is.
Whoever controls Supreme Court appointments will shape the fabric of
the culture, dramatically, for a very long time.

“It is not at all implausible that we are nominating
someone for the next 50 years,” says Northwestern University law
professor John McGinnis.

As emerging technology introduces new legal questions, and gay
marriage and other contemporary issues reach the courts, the next
decades will bring a wide and unpredictable swath of cases. The court
also is likely to see continued challenges to Roe v. Wade, the 1973
decision that made abortion legal nationwide.

“Roe v. Wade is at the top of the list” of what could be immediately
at stake in court appointments, Cornell University law professor
Michael Dorf says. He emphasizes that the bench would change more
dramatically if a McCain pick succeeded a liberal. Five justices — a
bare majority that includes the four liberals — have endorsed the 1973
landmark ruling on abortion.

Landmark, because nowhere in the Constitution does any such right
exist. Blackmun fabricated it, and even liberal pro-choice judges,
lawyers and professors consider it bad law. But it has claimed about 50 million lives since 1973….and counting.