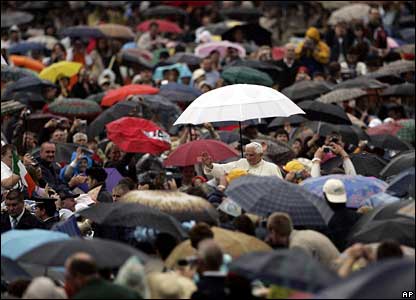 Pope Benedict XVI waves to the crowd during his weekly general audience in St Peter’s Square at the Vatican in Rome. / AP

Ever since he was elected in April 2005, the
media have been expecting Pope Benedict XVI to be tripped up and rejected by the
masses that flocked to John Paul II, his outgoing, charismatic predecessor. But
it hasn’t happened.

Indeed, possibly as a legacy of John Paul’s
outreach to the entire world, in the first few years of his papacy Benedict drew
even larger crowds than Karol Woytjla did. The crowds have subsided a bit, but
again and again, Pope Benedict has advanced, gliding unharmed through hoops of fire,
around traps and past ambushes.

From the Convention of the Church in Italy,
held at Verona in 2006, which the media had ominously suggested might burst the
bubble of existing divisions within the Church, to the controversy over the speech
at Regensburg, which ended up in meetings and inter-religious dialogue of the highest
level, Josef Ratzinger has consistently turned troubles into triumphs.

His trips to North America, Australia, France
and most recently the United Kingdom, were all preceded by months of serious challenges
and even provocation. Atheist campaigners even called for his arrest upon his arrival
in Britain. But every dispute, every trip, has ended with the acclaim of the people,
of the authorities and – most miraculously – of the media.

Even the priestly sex scandal turned into a
boomerang, when it was revealed that it had been none other than Cardinal Ratzinger
who had insisted on rigorously cleaning house once the abuses had come to light,
under his watch at the Congregation for the Doctrine of the Faith. Ironically, the
fact that it had been he who had prevailed over more lenient policies, might never
have come to light had not part of the press insisted on pinning the blame on him.

One entertaining example of the uncanny reversals
of booby traps was seen in March 2009 on Channel Three of RAI, the Italian state-run
television. In her regular Sunday afternoon show “In Half An Hour” (a
bit like BBC World’s Hardtalk), anchorwoman Lucia Annunziata, formerly President
of RAI itself, interviewed US Jesuit Fr Thomas J. Reese. She introduced him as a
priest who had resigned as Editor-in-chief of America Magazine when Cardinal Ratzinger
was elected pope.

Annunziata, who had recently interviewed rebel
theologian Hans Kung, introduced her guest as “hugely important”, “high calibre”
and “immensely prestigious”. She clearly expected Fr Reese to tip the
bucket on the Pope.

But her plan backfired. Not only did Fr Reese
not attack the Pope, but he matter-of-factly validated every one of his doctrinal
positions. His criticisms were limited to reflecting that the Holy Father should
surround himself with people who are more expert with the media.

Flustered, Annunziata broached one issue after
another in an increasingly pleading tone: “Surely on this matter you must differ
with the Pope?” and “You must be willing to at least admit that not everyone approves
of the Pope these days?” Reese smilingly parried every lunge.

Finally she played her trump card: “What
about the little girl in Brazil who was raped by her stepfather? Do you support
even the decision to excommunicate the family who took her to an abortion clinic?” But Reese laughed pleasantly and pointed out:
“I’m not an enemy of the Pope. I think he’s right on all of the issues you
mentioned.” And then the mortal blow: “I like the Pope!”

Thus a potentially disastrous interview turned
into unexpected publicity for the Pope, thanks to the ability of an honest priest,
when the time came, to set aside past differences and stand shoulder to shoulder
with him — on prime time TV.

The attacks won’t stop, of course. But in the five
and a half years of Benedict’s Papacy, they have all led to an increase in the prestige
of the Catholic Church.

In a final irony, the man derided as “God’s
rottweiler”, a stern and distant intellectual, connects with the people,
drawing crowds from every age, background, and walk of life. Take the traditional
summer appearances in Castel Gandolfo. Quite often Pope Benedict returns to Rome
for the Wednesday audiences, because the square could not hold all of the people
who sought to be there.

Far from marking its demise, under Josef Ratzinger’s
watch the Catholic Church has been recovering its reputation and, along with it,
the ability to spread its message. Whoever would have thought that this
quintessential intellectual, 83 going on 84, would rewrite the public relations
textbooks?


Alessandra Nucci is an Italian writer and freelance journalist. In 2007
she won the Golden Florin in the essay sector of  the Premio Firenze
[Florence Award] for her book on gender feminism as an instrument of class
warfare, La donna a una dimensione [One-Dimensional Woman], published by
Marietti 1820.

Alessandra Nucci is an Italian writer and freelance journalist. In 2007 she won the Golden Florin in the essay sector of  the Premio Firenze [Florence Award] for her book on gender... More by Alessandra Nucci