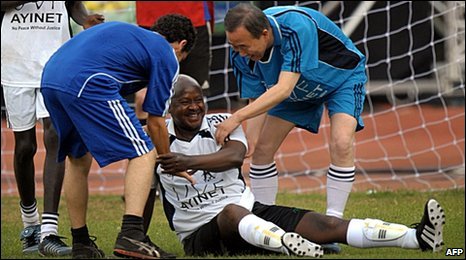 With World Cup fever about to peak, a May
31 soccer face-off between the president of Uganda and the secretary-general of
the United Nations was bound to struggle in the media. But just for the record,
Mr Yoweri Musuveni’s white-shirted Dignity team defeated Mr Ban Ki-moon’s
Justice team 1-0. Survivors of wars in Uganda and Darfur played with them.

In the eight years since the Court began
operating, it has convicted no one. Investigations are under way in five
countries — Kenya, Uganda, Central African Republic, the Democratic Republic
of Congo, and Sudan – but all of them are in Africa. In March this year
Bangladesh became the 111th party to the Rome Statute, while 37
others have signed but not yet ratified it.

The ICC deals with crimes like genocide,
crimes against humanity, and rape as a weapon of war. It only intervenes when
national courts do not or cannot act. Signatory states have the power and duty
to arrest any person served with an ICC warrant who enters their territory.

Although – predictably – there were calls
for Israel to be hauled before the ICC after the nine deaths in the Gaza
flotilla incident last week, Israel is not a signatory to the Rome Treaty which
created the court. Nor are superpowers the United States, Russia, India and
China. The ICC has no jurisdiction over crimes committed by their citizens.

Early in June President Museveni formally
assented to the ICC Act, enabling prosecution of perpetrators of war crimes in
Uganda. The most wanted Ugandans are Joseph Kony, the Lord’s Resistance Army
(LRA) rebel leader, and two of his commanders, Okot Odhiambo and Dominic
Ongwen. Two other warrants for arrest were made on Vincent Otti and Raska
Lukwiya, both of whom are now dead. At the request of the Ugandan government,
the ICC has indicted the five men for their part in the more than 2,000
killings and 3,200 abductions in nearly 900 attacks carried out between July
2002 (when the Rome Statute came into force) and June 2004.

Some local people argue that the ICC is
concentrating exclusively on Africa. A special court for the main Rwandan
genocide perpetrators was convened in Arusha, Tanzania. Arrest warrants are
also out for Omar Bashir, the only “wanted” sitting head of state, Muhammed Ali
Abd al-Rahman, the Janjaweed militia leader and Muhammed Harun, former Sudanese
State Minister for the Interior, for their part in the crimes committed in
Darfur.

The ICC has already begun its trial of the
Congolese rebel leader, Thomas Lubanga in January last year, followed by the
trials of two other rebel leaders, Germain Katanga and Mathieu Chui.
Jean-Pierre Bemba, former vice-president of Congo (DRC) is under arrest,
awaiting trial.

Last week Luis Moreno Ocampo was in nearby
Kenya, where he was given the government go-ahead to start an investigation on
the crimes against humanity committed during the post-election violence there
in 2008, and said that arrest warrants can be expected for at least two
suspected perpetrators.

The ICC claims that it is not specifically
targeting Africa. The whole of central Africa, from east to west, is volatile,
with quickly-expanding populations trying to settle down politically,
economically and socially as artificially-created nations. It also has immense
mineral resources, most of which are yet to be tapped. The outcome has been
sustained conflict in pockets of this wide region.

The United States has taken a dim view of
the ICC. It has signed the treaty, but it has not ratified it. And despite
positive vibes from the Obama administration, there is little chance that it
will. Americans fear that the ICC could claim jurisdiction over US soldiers
charged with imaginary war crimes or over American officials who created controversial
foreign policy initiatives.

In Africa, there is less enthusiasm than
one might think. Traditionally, Africans have had their own mechanism and
remedies for large-scale crimes and for re-establishing peace and meting out
justice. These are reflected in the “gacaca” (open-air) courts set up in Rwanda
to cope with those suspected of organizing and carrying out the 1994 massacres.
Mandela’s South Africa set up a Truth and Reconciliation Commission to deal
with the crimes of torture and repression in the years of apartheid.

Many people in northern Uganda, where there
have been countless atrocities, prefer the local solution of “mato oput” (where
both sides come together and drink a “bitter herb” of reconciliation), and let
bygones be bygones. Forgive, forget and get on with life; the community has its
ways of healing, and dealing with the perpetrators.

Let them be stopped by all means – by force
of arms or negotiation; but even if they come back to the region, they will be
sad men who won’t fit in. Whether or not their leaders go on trial in The Hague
or are allowed to rejoin society after some time of community or penal service,
many local people don’t see much difference. What they really want is peace and
the means and opportunity to rebuild their communities.

Is this contempt for international justice
and human rights or African “apathy”? Perhaps it is just a different
perception, with the emphasis on reconciliation and rehabilitation rather than
individual retribution. Perhaps the slender margin of victory for Dignity over
Justice in the celebrity soccer match gives a clue about what most Africans
really want.