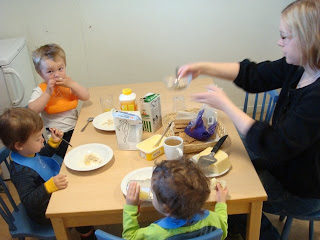 Jonas Himmelstrand, the Swedish author who has been busting the Swedish daycare myth around the world visited Ireland recently. After speaking at the Iona Institute’s conference on women, home and work he responded to an article in the Irish Times by two academics who wrote about the superiority of the “Nordic model” of childcare:

The Nordic model may not be perfect, but as recent OECD/Unicef
analyses indicate, Scandinavian countries (Finland, Norway, Sweden,
Denmark) consistently fare among the best internationally on all the
indicators of children’s wellbeing.

This is because their welfare
policies emphasise the civic role of the state in facilitating quality
of life and wellbeing among all its citizens.

Himmelstrand replied that there is no one “model” followed by the Scandinavian countries:

The
second misconception is that all Swedish mothers want to work and use
daycare for their small children. This is not true. Numerous studies
show a majority of Swedish people and parents, including young mothers,
want the option of homecare available…

We have covered his views on Swedish childcare before, but it is just as well to note that one should not lump all the Scandinavian countries together — at least on this issue.

Worth noting, too, are the comments of Catherine Hakim on gender equality in Sweden — aired at the same Iona Institute conference:

The other, Dr Catherine Hakim of the London School of Economics,
demolished the idea that Sweden has achieved gender equality. The glass
ceiling, she said, is harder to smash in Sweden than anyone imagines.
Sweden has a highly segregated labour market, with women clustered in
lower-paid public service jobs, while men are much more likely to be in
higher-paid private sector work. The gender pay gap still remains.

She
cited the work of Swedish economist Magnus Henrekson who, until 2009,
was professor of economics at the Stockholm School of Economics. When he
had raised the issue of continuing gender inequality in the Swedish
labour force, he could not get published in a European academic journal.
It was considered heresy.

A 20-year International Labour
Organisation study showed levels of occupational segregation in Nordic
countries were higher than in other OECD countries – higher than in
Egypt, China, Hong Kong, Japan, Malaysia and India. Swedish women have
very high sick leave levels, with the highest among women working in
daycare.

If gender equality means paying high taxes so that women can work in government offices all day long while their little children are looked after in government funded daycare centres, what’s the point?

You can read more about Jonas Himmelstrand’s work and the English edition of his book “Swedish Family Lessons” (due out later this year) here. Early this month he addressed a UN Expert Group Meeting in  New York on “Work Family Balance from a Swedish Perspective”.