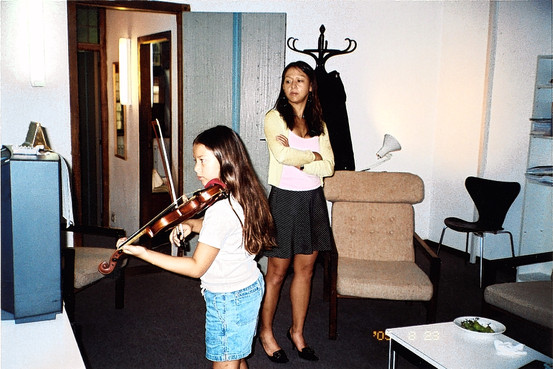 Amy Chua, the now infamous
“Tiger Mother,“ delivered her parenting
manifesto two weeks ago in a Wall Street
Journal article headlined “Why Chinese Mothers are Superior.” The article,
excerpted from her book, “The Battle Hymn of the Tiger Mother,”
outraged American moms.

Circling about, sometimes snarling,
American mommy-cats pounced on the Tiger’s arguments, shredding them with
sharpened claws. Bewildered and a bit scratched up, Chua has been in defensive
mode ever since, appealing
for parents to see her book as a “personal memoir about her own struggles with
child-rearing” not as “judgment on anybody else.” Chua’s daughter even came to
her beleaguered mother’s defense, publishing a warm letter
thanking her mom for parenting her, Tiger style.

One thing’s for sure. Chua’s book has sparked
an American conversation about children, their parents, and the elusive notion
of “success.” What have we learned?

First, that we are utterly confused, as a
society, about what “good parenting” means. And second, following from the
first, we don’t really know what defines “success.” What do we really want for
our children?

For Amy Chua, a law professor at Yale University,
her children’s success is all about high academic and musical achievement. Her
“Tiger” method produces nothing less than perfection, in classroom and concert
hall.

What ignited the firestorm surrounding
Chua’s book is her thesis:
she asserts that, unlike “Western”
mothers, “Chinese”
mothers produce successful kids—perfect students and musical prodigies—because their
parents expect perfection and force
the habits that produce it. She scorns the permissive parenting model where
children make their own decisions and quit when things get tough (like when
they need to practice or study more).

In fact, Chua sneers at how Americans’
preoccupation with a child’s “self-esteem” prevents parents from correcting the
child or insisting on better results. In contrast, the Chinese “solution to
substandard performance” is “to excoriate, punish, and shame the child. The
Chinese parent believes that their child will be strong enough to take the
shaming and to improve from it.”

The bottom line: rules and more rules, work
and more work, breed success. In the end, the thinking goes, Chinese children will
be forever grateful to their parents.

What do Western parents want? Happy kids.
Kids who feel good about themselves and who achieve their full potential. It’s
a model that has its own problems.

Not surprisingly, Chua’s critics reject her
methods as brutal and off-base. Business executives deride her approach, saying
its emphasis on individual achievement and solitary pursuit of perfection stunts
leadership abilities and fails to instill teamwork.
The Tiger Method, they argue, also stifles initiative, independence, and
creativity — qualities highly valued by Americans. As workers, then, her
children’s potential may be limited.

Chua’s socio-economic assumptions drew fire
as well. Parents note the costs of lessons and tutoring—options unaffordable for
many families. Similarly, the time commitment is an impossible luxury for
single parents or parents of large families.

Back in the mommy world, Chua earns scathing
criticism for the harsh rebukes and insults she hurled at her two daughters. She
rejected their gifts — homemade birthday cards — because they represented
less than the girls’ best efforts. Appalled, her critics wonder how can Chua’s daughters
possibly feel good about themselves?

The Tiger mindset also minimizes legitimate
human needs — like friendship. Chua adamantly refuses to let her girls have playdates
and sleepovers. Fatigue and frustration are simply obstacles on the way to
perfection, whether that’s a perfect test score or a flawless performance. The Western
mind worries, however, that she’s creating robots.

Finally, on the lighter side, Chua’s demand
for three hours of music practice brought laughs from one mom I know, who shook
her head knowingly, “Chinese kids clearly don’t play the trumpet. Mine do.
Three hours? I’d go mad.”

Is the measure of successful parenting whether
our child achieves her full potential? If so, then both Chua and her critics have
something to teach us.

Western parents often fail to set high
expectations. Or they may deliver a steady diet of unearned praise and instant
gratification, undercutting the child’s ability to persevere through tedious or
difficult work. And parents who abdicate their authority create underachieving
kids. Chua is right on those points.

At the same time, my heart cringes at
Chua’s reported harshness. Berating and belittling injure relationships. Encouragement
spurs achievement more powerfully than criticism does, in my book. So too do
good friends. And allowing a child to follow her interests may ignite her
strongest passion yet, leading to her greatest achievements. On these issues,
the critics are right and Chua is wrong.

But the real flaw in Chua’s manifesto — and
in her critics’ responses — is how they define parenting success. Achievement
is great, but it’s not the end game. It’s an inadequate measure of human
success or flourishing.

I
remember a few years back when an Olympic swimmer graced the front of my Wheaties box. The back of the box listed interview questions and her responses.

Here was
a champion swimmer who had pushed herself to reach her full potential, winning
an Olympic medal in the process. Admirable, certainly. But she could think of
no greater hero in her life, in history, than herself?

In my
book, her arrogant self-absorption represented a huge parenting failure, no
matter how great her Olympic achievement. Great achievement, without an
underlying vision for character development and deeper human purpose, can be the
product of narcissistic drives, greed, or self-absorption. And there’s nothing
good about that.

Missing
from Chua’s work—and the comments of her critics—is any sense of a fuller
purpose to human life. The measure of our parenting success is not what our
child does or achieves, but what kind of person he or she becomes. It’s more
about “being” and less about “doing”.

So what
should successful parents strive to do?

* Raise a child who is determined to be a good, moral human being


* Teach the child right from wrong,
grounding her in the rules that limit and govern
human behavior


* Teach her the virtues (Habits of doing good.)


* Help him orient his talents, decisions,
and achievements towards others (“the common
good”) rather than selfish goals.


* Model love, humility, forgiveness, and respect for all.

Amy, a
word of advice from a fellow mom… We’re all far from perfect but love makes all
things new again. You’ve loved your girls fiercely. Perhaps this is the season to
love gently.

Mary
Rice Hasson is a writer and attorney from the Washington, D.C. area. She blogs
at wordsfromcana.wordpress.com