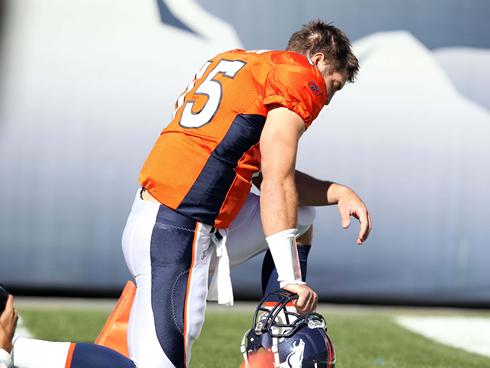 A lot of major league athletes are Christians. A lot of them invoke God or make personal expressions of faith at some point in their games. That’s been the case for a long time. Why are the media obsessing on this quarterback and his particular witness to faith?

I thought this was yesterday’s news about two years ago. But the media and the popular culture won’t let go of the Tim Tebow story and it’s grown larger than life.

A couple of days ago the Chicago Tribune featured this column by one of their top sports writers, since the Bears face Tebow and the Broncos on the field this Sunday.

So for my upcoming weekend in Denver I already have identified the first priority after making deadline: buying a Tim Tebow No. 15 Broncos jersey that fits a sixth-grader. I can’t wait to see him roll his eyes.

He prefers soccer to football but I don’t care. This is a teachable moment. To me, learning what Tebow represents ranks up there for 11-year-olds with eating vegetables and saying please. Tebow’s a winner. And the football teams he leads seldom lose too.

The most polarizing player in the NFL does everything parents hope their kids will do once they get older. Tebow stands up for his convictions no matter what follows. He works hard and with an attitude that makes those around him better. He succeeds in the face of inevitable, petty criticism. He is considerate to strangers.

While sports gives society ample reason to turn away, especially lately, Tebow forces many of us concerned with the disintegration of sportsmanship and skewed priorities to pay attention. While sincerity from professional athletes becomes scarcer with every sound bite, Tebow offers earnestness that oddly draws as much ridicule as respect. That’s because Tebow wears his religious beliefs on his sleeve so they’re more identifiable than the No. 15 on his Broncos jersey.

I believe if God cared about football Tebow would throw a tighter spiral with a quicker release. But I am all for building self-esteem and trying to leave a place better than you found it. For humility and teamwork that unites athletes of every race, creed and culture. For guys whose character turns sports into something that makes us more inspired than ashamed.

Mostly, I am all for fairness.

Tebow routinely gets mocked for thanking God first in postgame interviews. Yet we mostly shrug when NASCAR drivers thank their sponsors with the first words out of their mouths after winning a race. It’s much cooler for pro athletes to push products than piety. Why?

Okay, it’s making for a cultural conversation, snarky though it’s been on some fronts.

And when the shouting was over, Mr. Tebow did what he always does—he pointed skyward and took a knee in prayer. In postgame interviews, the young quarterback often starts by saying, “First, I’d like to thank my Lord and Savior Jesus Christ” and ends with “God bless.” He stresses that football is just a game and that God doesn’t care who wins or loses.

This combination of candid piety and improbable success on the field has made Mr. Tebow the most-discussed phenomenon of the National Football League season. Most expert analysts still consider him poor material for a pro quarterback.

However, he and his team have won six of their last seven games.

Mr. Tebow continues to defy his critics—and to embody the anxieties over religion that are dividing today’s sports world and embroiling players and fans alike.

See…this is where I pause and wonder whether that’s true, or whether it’s a media-manufactured anxiety and division.

These claims by athletes—”God helped me do that” or “I thank God that I was able to do that”—are so commonplace that they usually draw little notice. Most sports fans seem to think that such religious talk doesn’t really affect how the games are played or credit it with a powerful placebo effect. So what if Adrian Gonzalez of the Boston Red Sox has a Bible verse inscribed on his bat? Fine—whatever helps him to hit the long ball.

Right. That’s how I’ve always seen it. But the call him a ‘lightning rod’ between secularists and believers. And then there was the pivotal Super Bowl Ad.

The WSJ says it was about Tebow’s mother being advised to abort her son due to complications during pregnancy.

…but she refused and, well, now we have Tim Tebow.

The ad takes the softest possible approach to the subject and never uses the terms “abortion” or “pro-life,” but its intent was clear, and it generated controversy. Since then, feelings about Mr. Tebow have been a litmus test of political and social identity. If you think he’s destined to be a winner, you must be a naive evangelical. If you question his long-term chances as an NFL quarterback, you must hate people who love Jesus.

I think Dodd is exaggerting to make a point, but only slightly.

In the case of Mr. Tebow, what seems to fuel many of his fans—and to drive many of his critics crazy—is not so much his evangelical faith itself but the equanimity and generosity that his faith inspires in him. Can he really mean it when he says that football isn’t that important to him, that he cares more about transcendent things?

In this rather long and thorough commentary, I think this is the key snip:

Mr. Tebow may indeed turn out to be a hypocrite, like other high-profile Christians in recent memory. Some of us might even want that to happen, because moral failure is something we understand…

What we are far less sure how to do is to take seriously a public figure’s seemingly admirable character and professions of higher purpose. We don’t know how to trust goodness.

And who can blame us? We don’t want to be fooled again.

We don’t know how to trust goodness. What an admission.We are more comfortable with cynicism and scorn.

So this is an opportunity to realize that’s how we’ve become, maybe think about who betrayed our beliefs and trust, but spare those who have not yet dropped that ball.

Meanwhile, faith plays strongly into the Chicago Bears tradition. It’s as much needed now as ever.