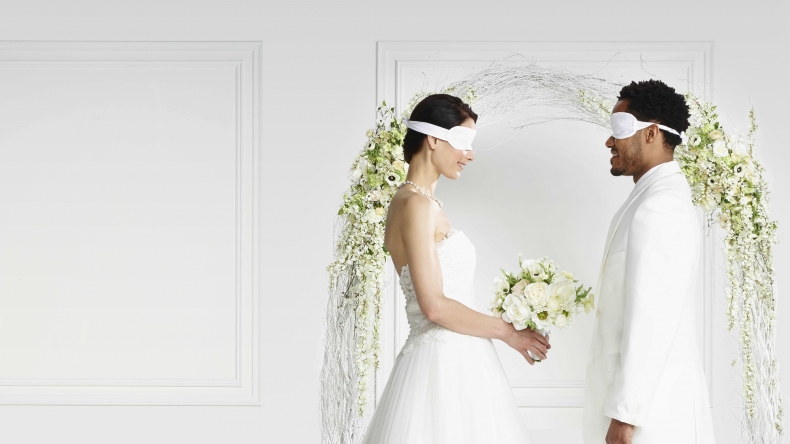 In the United States and Denmark, a reality-TV show called “Married at First Sight” has been an unexpected hit. In what the production company bills as “an extreme social experiment”, three couples meet their spouses for the very first time when they walk down the aisle on their wedding day.

After being legally married with splendid gowns and lots of confetti, they have one month to decide whether they will continue or file for divorce.

Of course – otherwise it would hardly be “compelling watching”. But the producers say that a sexologist, a spiritualist, a psychologist, and a sociologist have studied the bride and groom to give them best possible match. After the first American season, two couples were still together. The third had already split up. The sexual chemistry was there, but the relationship foundered on his lack of generosity.

Who would ever volunteer for such an experiment? People battered by unhappy childhoods; people bruised by past relationship failures; people who regard a marriage certificate as a mere piece of paper. Perhaps the producers’ promise of constant counselling gave them a last glimmer of hope of finding someone who really cared about them.

All of which is an introduction to an idea floated by bioethicist Julian Savulescu and two of his colleagues at Oxford University in the UK, Brian D. Earp and Anders Sandberg. Their recent article in the Cambridge Quarterly of Healthcare Ethics makes the case for latter-day love potions. Neuroscience research, they say, has shown that love is essentially “an emergent property of a cocktail of ancient neuropeptides and neurotransmitters”. If this is the case, drugs could be used to enhance or diminish romantic relationships.

One promising candidate as a love-potion is the hormone oxytocin. When injected into the brains of a small North American mammal called a prairie vole, males and females form lifelong pair bonds. When an oxytocin blocker is injected, the voles have a relationships breakdown and look for new sexual partners. Savulescu et al have been heartened by this experience. They ask us to imagine the following scenario. It’s much like the situation in “Married at First Sight”.

John and Lisa are a married couple. They are in relationship counseling session and are working on their communication. Their counselor, Mary, has shown them research suggesting that the neurotransmitter oxytocin—administered via a simple nasal spray—can decrease levels of stress while simultaneously increasing productive communication behaviors in some couples … they give their (fully informed) consent to having Mary administer a dose of oxytocin, at regular intervals, under her careful and expert guidance.

Savulescu’s ideas have provoked much comment among his colleagues. One of the strongest objections to latter-day love potions is that the love would not be “authentic”. People who used drugs to bewitch a partner – or to allow themselves to be bewitched – would need a  crutch to participate in the most important dimension of their lives. But our bioethicists dismiss this. “If the administration of certain love drugs turns out to be effective in promoting states of mind and behavioural dispositions that are conducive to a healthy relationship, then couples may simply have an additional tool at hand to help them pursue their higher-order inter-personal aims.”

Until now, relationship-enhancing drugs were just a bizarre fantasy drawn from Aldous Huxley’s 1932 novel Brave New World. But the success of “Married at First Sight” suggests that there a demand for such products exists. Some people have had life experiences so terrible that they will do anything to have a chance at lifelong happiness – even propping it up with love potions.

At this point, though, we need to ask whether the bioethicists really understand what love is. Savulescu et al acknowledge that it cannot be reduced to “brain chemicals and pathways”. But they do believe that love potions could have an enormous impact upon “our higher-order romantic experiences”. But are these really what we call love?

The Greeks were wiser. They had three, not just one, word for “love”. These were philia, the love of friendship; agape, selfless, disinterested love; and eros, passionate physical love. The team at Oxford appears to assume that eros is the summit of love.

In today’s society, this is a very common mistake which even underlies the push for same-sex marriage. People use  the ecstasy of sexual union as the litmus test of what they describe as “love”.

But the experience of most people in successful relationships belies this. It is not eros which sustains and nourishes high-quality, stable marriages, but the commitment of agape. There is much more to love than sexual chemistry. One needs to have a determined will to seek the good of the other person. This spiritual side of human relationships is what makes human beings and prairie voles different.

Contemporary social science seems to bear this out. Last year in the Journal of Marriage and Family, W. Bradford Wilcox of the University of Virginia and Jeffrey Dew at Utah State University, reported that they had studied the experiences of 2,700 adults and found that “(a) small acts of kindness … (b) expressions of respect, (c) displays of affection, and (d) forgiveness” substantially increased marital quality, decreased the probability of conflict and diminished their fears of divorce. They summed up these qualities in the word “generosity”.

This is why Savulescu’s ideas are likely to catch on, except among the producers of “Married at First Sight”. Pfizer made a motza out of its drug for eros, Viagra; will it ever make a drug for agape? I doubt it.