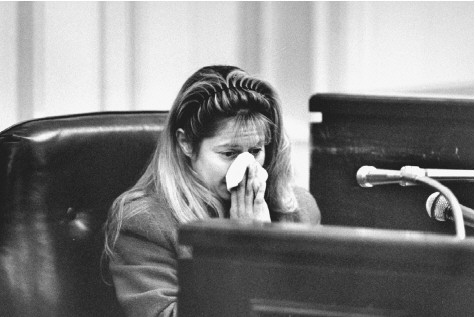 Holly Ramona testifies in 1994 in a lawsuit against her therapists
for implanting false memories.

In the last few years, a new sexual liberation movement, transgenderism, has arisen. It is complete with an ideology: A person can be born into the “wrong” sex and can correct that problem by amputations, hormones, change of name, pronouns and dress, demand for full public recognition as a member of the other sex, and punishment of those who simply do not believe it.

The ideology assumes that the mind can be at complete odds with the body and that the sex determination of every cell in the body in most humans is irrelevant. Recently, for example, we learned from a Dallas TV news outlet,

Marilyn, who was a boy at birth, returned to Cannon Elementary School in Grapevine this year as a transgender girl. The third grader says many of her classmates and teachers didn’t embrace the change.

The trouble was that the children insisted that Marilyn was still really a boy.

We are also told,

A couple of weeks ago, the 8-year-old loved being the center of attention and even asked to be part of the Pride Parade in Dallas. But at school, she says she was alienated due to constant bullying from some of her peers about her gender identity.

The child is being educated at home for now.

If you are wondering how likely it is that this transgender drama truly originated with and is continuously sustained by the child, you may find the “recovered memories ” movement of the 1980s and ‘90s of interest.

“Repressed memory” is a concept in Freudian psychoanalysis: According to the theory, when childhood sexual abuse happens, we store it in our unconscious, where we cannot access it. Late poor functioning in adulthood is traced to a resulting dissociative disorder or  multiple personality disorder also called “dissociative disorder.”

Many mid-life women who underwent recovered memories therapy at that time suddenly recalled having been sexually abused. Popular media jumped on the sensational stories emerging from therapy: Roseanne Barr was featured on People’s cover in 1991 (“A Star Cries Incest”), as was a former Miss America three months earlier. The Washington Post, the Los Angeles Times, Seventeen, Glamour, Newsweek, and Time weighed in.

The public probably had no idea that the field actually rested on very shaky evidence. The evidence for recovered memories of childhood abuse was based on clinical anecdotes from therapists. By its nature, the abuse was difficult or impossible to corroborate. In any event, the relationship between the mind and the brain is, to put it mildly, poorly understood.

Plus, the range of symptoms that led therapists to suspect repressed memories was not narrow. It represented a very broad swath of difficulties coping as an adult. Techniques used to unearth memories, such as psychotherapy, guided imagery, and hypnosis, were considered questionable for getting reliable, concrete information.

How bad did it get? In North America during the 1980s, claims of satanic ritual abuse of children by family or authority figures—only discovered later through these specialized “recovered memory” techniques—soon raged out of all proportion to likelihood.

Many of the claims did not even seem possible. But therapists were convinced that their clients were telling “the truth.”  Law enforcement and social science professionals, reluctant to be seen as “uncaring” were forced to take the claims seriously.

As the diagnosis caught on, more and more clients were evaluated by therapists who claimed special expertise in identifying such satanic ritual abuse. The public was urged to believe on the basis of the many similar, sincere testimonies of victims. But similarity can be a reason for doubt, not acceptance. Sincere testimonies do not equal observed fact.

In several of these cases, women (called “breeders”) claim to have had babies that were turned over for human sacrifice. This type of case is probably best typified by books like Michelle Remembers (Smith & Pazder, 1980), Satan’s Underground (Stratford, 1988) and Satan’s Children (Mayer, 1991.)”

These are the most polarizing, frustrating, and baffling cases I have encountered in more than 18 years of studying the criminal aspects of deviant sexual behavior.”

That was what prompted me, as a news writer, to pay attention at the time: There was no shared public evidence that satanic events had occurred. Generally speaking, major religious organizations were not behind the claims aout Satan (as one might have expected). Intensive excavations turned up no forensic finds. In any event, as I knew from my religion news desk, organized satanic cults were far more common in entertainment media than in real life in North America.

The furore intensified; then the recovered memories movement collapsed. Its unfalsifiability caught up with it. But it left in its wake serious harm. Families were shattered and careers wrecked over events that it was impossible to believe, let alone to disprove.

In an earlier series, I compared the recent controversy around U Texas sociologist Mark Regnerus’s study on poor outcomes from gay parenting with the one that ensued decades ago over anthropologist Derek Freeman’s discovery that many of Margaret Mead’s culturally iconic claims about guilt-free teen promiscuity in Samoa were made up. In both those cases, the results had to be discredited, not for science reasons but for cultural reasons. The data remain, for now, largely unattended.

But before I go any further into why it all collapsed, I must issue one disclaimer: No one has—or ever could—“prove” that a person who feels that she has recovered an unconscious memory of dreadful abuse was not, in fact, a victim. Even the scientists who deflated the recovered memory claims are careful to point that out.

As the American Psychological Association says, there is little or no science support for the general theories that underlay the recovered memories movement. But people who are coping poorly and think that they may be victims of unremembered trauma should feel confident in seeking counselling. Many people are helped by wise and compassionate counselling, whether or not it confirms a client’s original conviction about what is wrong.

See also: What’s wrong with social science today? Did it all begin with Margaret Mead’s giddy portrait of guilt-free promiscuity in the 1920s?

How did UTexas sociologist Mark Regnerus get to be so hated? A study of gay parenting exploded when it hit the media