Illustration: www.bridgemanart.com via The Guardian

Have adventure books been left on the shelf? Is Treasure Island a lost world for today’s youngsters? Telegraph reviewer Jake Kerridge laments that “once adored works” like Robert Louis Stevenson’s classic yarn really are out of fashion, and are not being replaced by stories that appeal to boys in particular.

While mentioning Anthony Horowitz’s popular teenage detective series Alex Rider, Rick Riordan’s Percy Jackson novels, and the Artemis Fowl books of Eoin Colfer, he says that “[t]he current trend for older teenage boys is not to read adult fiction so much as the new wave of intelligent, emotionally literate books about teenagers.” 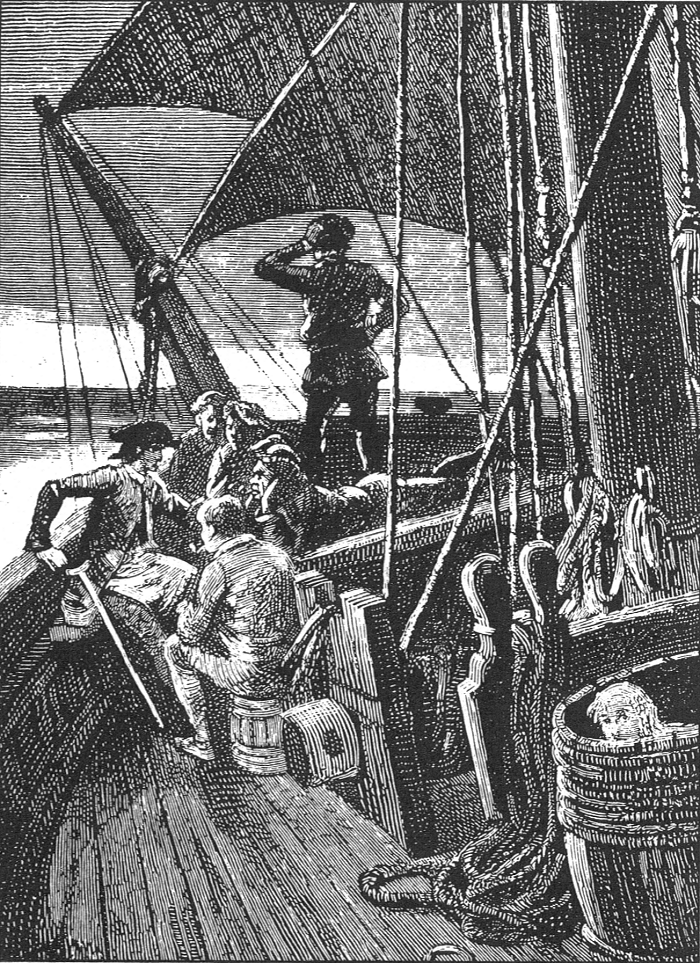 If this is so, it has a lot to do with the current politically correct preoccupations of publishers. As Mr Kerridge points out, the old adventure stories appealed to everyone, but, “Perhaps the days of the book with multi-generational appeal are an anachronism.”

He also notes that such stories were once the staple of multigenerational television, regularly dramatised by the BBC for the Sunday tea-time slot. But the dramatisation of Ivanhoe in 1997 “was probably Walter Scott’s last hurrah on the Beeb.”

Indeed, the BBC abandoned that particular slot some time ago, and having dispensed with “inter-generational viewing” now justify their failure to provide such enertainment with the circular argument that families no longer watch TV together.

They have also parked their children’s programmes on a separate channel, and while adults may think it safe for them to watch alone, they are mistaken. This year the BBC followed the example of the PC book publishers, with their gender-bending and sexual diversity themed stories for children. As part of their contribution to “LGBT history month” the singer Will Young read a story about same-sex parents on Bedtime Stories on the CBeebies channel. Two Dads, the blurb informs us, is “the tale of a boy who has been adopted and finds himself happily raised by two fathers.”

Young said at the time: “Children’s books are one of the first ways we learn about the world around us so I’m overjoyed to be reading a story to mark LGBT History Month. More so than ever, families in all forms should be recognised and celebrated – whether that’s two dads, two mums, families with a mum and a dad, those with a single parent, adoptive families and so on. I’ve never been more sure that inclusivity starts from the youngest possible age.” (‘Will Young to read same-sex parents story on CBeebies’, Telegraph, February 2, 2019).

The author of Two Dads, Carolyn Robertson, who also wrote Two Mums and a Menagerie and is herself raising two adopted boys with a female partner, is ‘a keen advocate of the rights and needs of adopted children and children within LGBT families.

“The modern reader will snigger at unintended instances of homoeroticism” in the classic adventure stories, according to Kerridge, but until the 1950s and 1960s male friendships were regarded simply as male friendships. As C. H. Rolph recalls in Living Twice (1976) it was largely thanks to the publishing industry that around that time the obscenity laws were relaxed, leading to greater public awareness of homosexuality to the extent that readers now see homoeroticism everywhere.

Kerridge further says that “in the past, women and girls have read [adventure novels] avidly, … far more readily than men have tended to tackle Jane Austen or Charlotte Brontë,” although the novels of Jane Austen were a favourite with Winston Churchill. Today, far from having their horizons expanded, the reading public will be left with the ever-narrower PC focus of the media industry, in whose eyes “What damns [the old adventure stories] most … is their political incorrectness,” with their focus on the white male heroes of Imperialism “saving” the non-white races, “embodying a benevolent version of colonialism that never worked so well outside of fiction.”

At least the stories were not viciously and overtly racist, and their best elements could easily be incorporated into a new generation of adventure books. The fact that this has not happened shows that the publishing industry, rather than the public, has become bored with classic stories and, ignoring popular demand, has decided to ditch them. Not that adventure has gone out of fashion with these elites, but they now see it in sexual diversity, political correctness and gender ideology.

As Kerridge concludes, reading the classic adventure tales “feels so salutary – like breathing gloriously fresh, unpolluted air” because most were written before the advent of political correctness – before the Great War, at a time when it was “possible to have such faith in the future” and “believe that civilised values would always triumph.”

At a time when civilised values have never been under so much threat from without, our own cultural elites are busily undermining them from within. The weakening the people’s resolve to stand up for civilisation contrasts with the resolution so admirably conveyed by Rudyard Kipling’s poem If.

Despite the universal appeal of those sentiments Kipling is now on the PC naughty step, while cultural Marxists work to render the past truly “a foreign land” by writing it off as non-PC. But unless – as in Orwell’s 1984 – they succeed in literally destroying these uplifting stories, along with the human desire for adventure, they cannot prevent us from returning to them for a breath of fresh air.

If we do not preserve this heritage, the children now being indoctrinated in PC ideology will have no happy ending, for as we are continually told, their mental health is under unprecedented stress. As we are not told, however, this is mainly thanks to their being indoctrinated by progressive politicians and the media with fears of eco-armageddon, and destabilised by adult sexual preoccupations, while family and religion are sidelined.

It is left to the rest of us to improve their mental health and boost their self-esteem by unlocking the cultural treasures to be found in adventure tales like Treasure Island.

Ann Farmer lives in the UK. She is the author of By Their Fruits: Eugenics, Population Control, and the Abortion Campaign (CUAP, 2008); The Language of Life: Christians Facing the Abortion Challenge (St Pauls, 1995), and Prophets & Priests: the Hidden Face of the Birth Control Movement (St Austin Press, 2002).

Ann Farmer, mother of three, grandmother of five and permanently disabled, is based in Woodford Green, Essex. She is a poet, illustrator, writer and pro-life feminist devoted to defending the natural family... More by Ann Farmer