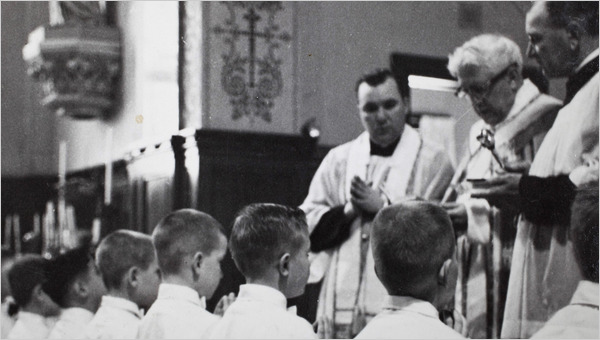 The New York Times, in its coverage of the Milwaukee sex abuse allegations, may quote Fr. Thomas Brundage but the priest says they never spoke to him. This is important because of the role Fr. Brundage plays in the tragedy of Fr. Lawrence Murphy. Fr. Brundage establishes his bona fides on the issue pretty quickly.

To provide context to this article, I was the Judicial Vicar for the Archdiocese of Milwaukee from 1995-2003. During those years, I presided over four canonical criminal cases, one of which involved Father Lawrence Murphy.

In an op-ed for the Catholic Anchor, the diocesan paper for Anchorage, Alaska where he is now stationed, Fr. Brunage goes into some detail surrounding the Fr. Murphy trial but the main point is this.

In the summer of 1998, I ordered Father Murphy to be present at a deposition at the chancery in Milwaukee. I received, soon after, a letter from his doctor that he was in frail health and could travel not more than 20 miles (Boulder Junction to Milwaukee would be about 276 miles). A week later, Father Murphy died of natural causes in a location about 100 miles from his home.

Despite a recommendation not to proceed, Fr. Lawrence was still on trial when he died. Another point Fr. Brundage raises is that the Times claim that as Prefect for the Congregation of the Doctrine of the Faith, Pope Benedict, then Cardinal Ratzinger would have known about this. Fr. Brundage says he doubts this would have happened.

Third, the competency to hear cases of sexual abuse of minors shifted from the Roman Rota to the Congregation for the Doctrine of the Faith headed by Cardinal Ratzinger in 2001. Until that time, most appeal cases went to the Rota and it was our experience that cases could languish for years in this court. When the competency was changed to the Congregation for the Doctrine of the Faith, in my observation as well as many of my canonical colleagues, sexual abuse cases were handled expeditiously, fairly, and with due regard to the rights of all the parties involved. I have no doubt that this was the work of then Cardinal Ratzinger.

Fr. Brundage goes on to priase all that Pope Benedict has done to protect children and punish the guilty. It is a good article, I suggest you go read it.