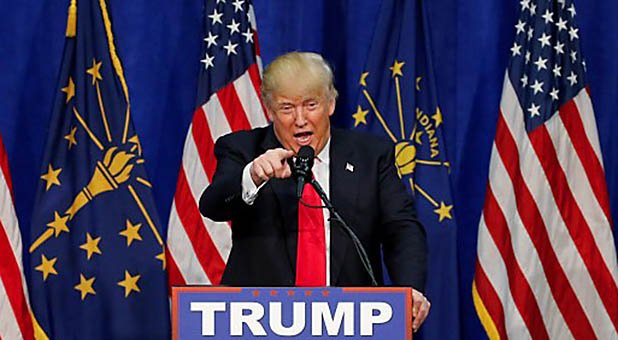 He claims to have a mandate. So do they.

As the New York Times reports it, GOP presumptive nominee Donald Trump claims he has ‘a “mandate” from his supporters to run as a fiery populist outsider’ instead of embracing “a traditional, mellower and more inclusive approach” that some party leaders advocate. He got this far being provocative, and he’s not changing course now, he says, according to the Times.

Such behavior, rhetoric, and the determination to keep doing more of the same now that he has virtually wrapped up the nomination, has left many conservatives wondering and asking ‘What to do?‘ Kathryn Lopez notes the angst, and offers sobering considerations.

What ails us is a disordered view of what politics is about. We seem to have a bipartisan problem of looking for a savior in a president — it’s the stuff both of Barack Obama’s “We are the ones we have been waiting for” campaign and of Republicans (and now even some Democrats) idolizing the memory of Ronald Reagan. So take a deep breath, everyone — whomever you do or don’t support this presidential-election season. The presidency is vitally important, of course. But not in the ways we’ve been tending to think. Donald Trump didn’t start the fire, and there was never going to be a perfect presidential candidate who could put it out. That’s our work — the work of good citizenship.

Which is exactly the point Stephen White makes in his new book Red, White, Blue and Catholic.

It’s a perennial question: Can Christians be good citizens? The author of the second century “Letter to Diognetus” addressed this question. Three centuries later, St. Augustine wrote City of God largely in response to the same question. In American history, the question has been asked more specifically of Catholics, for a variety of reasons. At its heart, the question is about the nature and scope of the political good: Is the good of the political community compatible with Christian claims about the nature and destiny of the human person? Catholics should relish the chance to address that question because it gets to the very heart of the faith.

Which is living what’s known as ‘the social gospel’, the respect for human dignity, the common good, solidarity and subsidiarity. All of which can be helped or hindered by social policy made through the political process.

I think one danger which arises from our politics of permanent crisis is the temptation to think that if we could just get people to vote the right way, and therefore have the right people in government, everything would take care of itself. Needless to say, having the “right people” winning elections is hardly a sufficient condition for a flourishing republic. The health of the republic depends upon our being a people possessed of certain virtues. The cultivation of those virtues — those habits which enable us to live our freedom well — is primarily the work of civil society. Government can help a little, and hinder a lot. But most of the work of forming citizens falls to families, schools, churches, businesses, and so on.

Which gets to what has become a struggle for people trying to get on with living out the  mandate of forming and serving a just and virtuous society. And that’s where the politics of passion gets mixed up with anger, and prudence becomes more necessary, as Nathan Schlueter points out at Public Discourse:

This divorce between principle and prudence has made false political idealism seem attractive. It has also made prudence one of the most difficult virtues to understand and to defend in our current political climate. But if we want a just society, we must begin by recovering the right understanding of prudence. There is perhaps no better way to begin such a recovery than by studying the patron saint of statesmen, Thomas More.

The article notes that in More’s work Utopia, he explores “with great subtlety and wit the dangerous dynamics of anger and political idealism.” It’s a good study for our particular season. Having a character suggest that ‘politics is impervious to truth’, More makes his central point:

Don’t give up the ship in a storm because you cannot hold back the winds . . . Instead, by an indirect approach, you must strive and struggle as best you can to handle everything tactfully—and thus what you cannot turn to good, you may at least make as little bad as possible. For it is impossible to make everything good unless all men are good, and that I don’t quite expect to see for quite a few years yet.

How well this lesson transcends the times, and how apt it has become yet again.