The end of the financial year has arrived in India, as it has in a number of other countries, but there the pressure of the bottom line has produced a very shocking effect. Early last month two doctors working at a hospital in the Malda district of West Bengal, performed  sterilisation surgery on 103 women in one day. Since the hospital could only accommodate 30 women the rest were carried out on rough stretchers and dumped on an open field to recover. Some were loaded onto rickshaws, still bleeding and in semi-conscious or unconscious states, to be sent home. One woman fell off a rickshaw on her way home and had to be hospitalised with severe injuries.

This barbarous scene, captured on video by activists and aired on Indian news channel NDTV, may seem like a throwback to the 1970s when Indira Gandhi’s war on population was in full swing – something local and anomalous in 2013 – but it is not. Indian human rights activists say that mass sterilisation camps occur across the country, especially in the poorest states, driven by female sterilisation targets set by state governments in the spirit of the central government’s population plan.

“The camps are happening non-stop right now throughout the country because the end of the financial year – March 31 – is approaching and there is pressure on health workers to meet their sterilisation quotas,” said an American lawyer with the Human Rights Law Network (HRLN) in Delhi in the Population Research Institute’s journal last month. “We’ll have a constant stream of injured and dying women as a result.”

The PRI Review article cites evidence of recent quota setting from Rajasthan and Bihar states. To motivate the poor whom they are targeting, officials offer incentives such as mobile phones, lottery tickets for cars, motorcycles and refrigerators. Most states also offer small cash bribes. The Accredited Social Health Activist (ASHA) workers, usually just poor village women themselves, are also paid a bonus for every person from their district that they bring to a sterilisation camp. A sign in a village in Bihar earlier this month stated that every ASHA worker would be required to bring 12 women and one man in for sterilisation. Since there are 8400 such workers this would amount to over 100,000 sterilisations.

“These are extraordinarily marginalised women,” the HRLN lawyer adds. Most cannot read and are married young. “If the government has money for incentives, it really should be paying for basic health care necessities. These women go to hospitals without running water or electricity.”

Sometimes there is no hospital at all. Affidavits submitted to the Supreme Court of India by HRLN last April tell of a sterilisation camp in Bihar in January 2012, in which 53 lower caste women were sterilised by one doctor in two hours one evening – in a high school classroom where desks had been pushed together to make an “operating table”.

Whatever justifications India may offer for its current policy of fertility reduction, nothing can excuse such inhumane and reckless methods.

India has a longstanding commitment to population control. In 1952 the former British colony became the first country in the world to adopt such a policy (in practice, if not through the legislature) aiming to “stabilise the population at a level consistent with the requirement of national economy”. It was urged on by the West as part of a wider campaign that continues today and that has been documented by Columbia University historian Matthew Connelly in his 2008 book, Fatal Misconception: The Struggle to Control World Population.

Sterilisation quickly became the preferred method in India for what is euphemistically described as “family planning”. During crop failures due to drought in 1967-68, the United States under President Lyndon Johnson tied food aid to birth control, accounting for the large number of sterilisations and IUD insertions during those years.

The fact that IUDs were known to cause infections and sterility (or even death) was no problem in the eyes of one participant at a 1962 Population Council conference quoted by Connelly: “Perhaps the individual patient is expendable in the general scheme of things,” he said, “particularly if the infection she acquires is sterilising but not lethal.”

In the mid-1970s Indira Gandhi’s government made sterilisation a condition for all kinds of services and everyone from government officials to train conductors was given a sterilisation quota. In the course of one year, says Connelly, eight million sterilisations were recorded: 6.2 million vasectomies and 2.05 million tubectomies. The Dalits (Untouchables) were particular targets.

Although by 1997 the total fertility rate had fallen to 3.3 children per woman (down from 6.0 in 1951), national and international pressure for India to achieve “replacement” fertility continued. India’s National Population Policy 2000 document speaks of promoting “vigorously the small family norm” to achieve that objective. “Small family” means no more than two children.

After the 1994 UN sponsored International Conference on Population and Development India announced that it would take a “target-free” approach to “family planning”. Since then the government has stopped setting centralised targets, but state authorities and district health officials have not.

In 2005, reports the PRI Review, “the Supreme Court of India ordered state governments to take immediate action to regulate conditions under which sterilisations were performed and to end coercive practices. The states were also specifically directed to compensate women who suffered complications as a result of sub-standard practices, as well as the relatives of victims who died from botched abortions.” Eight years on, however, “unsafe sterilisation camps are the norm throughout India”.

The Supreme Court requires responses from the states to the petition HRLN filed last year documenting the widespread abuse of the national guidelines governing mass sterilisations. By February half the states had not bothered to respond. The court is to address the issues again next month.

Time to stop the foreign funding

Some champions of reproductive rights (population control by another name) are also concerned about the gross human rights violations involved in these campaigns. At the London summit on family planning last July the New York based Human Rights Watch and two other organisations seemed unimpressed with the Indian government’s announcement of a “paradigm shift” in its efforts at reducing fertility. The three NGOs drew attention to the continued use of target setting and urged India to “eliminate coercive female sterilisation practices”. 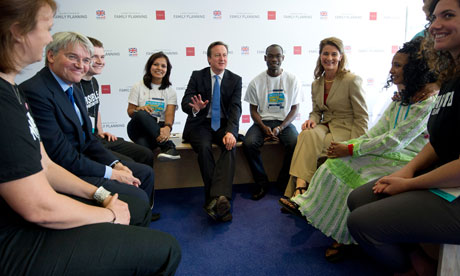 The people that western human rights groups really need to address, however, are their own governments. As in the beginning, so now it is foreign influence that is driving India’s coercive policies.

Over the last eight years the British government has spent £166 million on India’s fertility control programme, the Reproductive and Child Health Programme Phase II. Revelations about forced sterilisations prompted the UK Department for International Development in 2011 to announce that it had “completely changed” the way its aid was spent in India; it was now going to focus on access to contraception in three of the poorest states. Two of those states, Madhya Pradesh and Bihar, were still running mass sterilisation operations early the following year when the HRLN filed its petition with the Supreme Court.

The United States Agency for International Development is another major funder of fertility control programmes, with $23 million earmarked for family planning in 2011 alone. A 2008 document seen by the Population Research Institute discusses the implementation of the “population policy” in the state of Uttar Pradesh, for example, whose primary stated goal is reducing the state’s fertility rate from 4.3 to 2.1 by 2016. “It is hardly surprising then,” says the PRI Review, “that each year 450,000 women in the state undergo sterilisation, most of them at government-sponsored camps.”

A US law prohibits USAID from funding such programmes, but the agency failed to respond to PRI’s questions about the sterilisation camps.

Last year’s London summit, starring Melinda Gates and an enthusiastic appearance by UK Prime Minister David Cameron, was an attempt to breathe new life into the long-standing Western war on Third World population. It aimed to raise $4bn to provide birth control to 120 million women in the global south by 2020. The rich countries pledged $2.6bn. The developing countries themselves are expected to meet the remaining 1.4 billion.

Imagine what that money could do for things that would help Indian and other poor women (and their husbands) make really free decisions about fertility: education, maternal and infant health care to reduce infant mortality, and social security for the elderly. The West reduced its fertility in precisely these ways before contraception and abortion even came onto the scene.

For the rich countries to continue funding programmes with population targets or “norms” is to connive at coercive methods, not excluding such horrors as mass sterilisation camps. Until they pull their money out of these programmes let’s hear no more rhetoric from their leaders about reproductive rights. Such hypocrisy really turns the stomach.