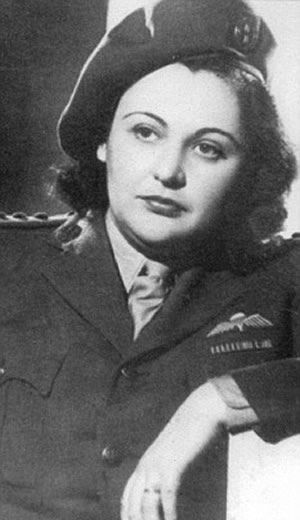 Two women of notable character died at the weekend on different
sides of the Atlantic: World War II heroine Nancy Wake succumbed to a chest
infection in a London hospital at the age of almost 99; American cardiologist
and women’s health research pioneer Bernadine P. Healy died at home in Ohio of brain
cancer at the age of only 67.

They came from different parts of the world, belonged to
different generations and made their mark in completely different ways. One
lived an incredibly adventurous and dangerous life in Nazi occupied France, for
which she was subsequently decorated — and celebrated in books and films; the
other distinguished herself as a physician and administrator in late twentieth
century America, battling a masculine medical culture and bureaucracy to
promote reforms. Both, however, needed an exceptional amount of grit to follow
their convictions.

Nancy Wake
was born in New Zealand, grew up in Sydney, ran away to England at the age of
18, worked as a journalist in Europe in the 1930s, married a wealthy Frenchman,
Henri Fiocca, in 1939 and could have lived a life of luxury with him in
Marseilles if it were not for the Nazi invasion six months later. Having
witnessed the rise of Nazism in Europe and the persecution of Jews and blacks,
she had conceived a profound indignation against it and was soon drawn, with her
husband, into the Resistance movement.

She set up escape routes for more than 1000 Allied
servicemen and sabotaged German facilities, often under the nose of the
Gestapo, and her many narrow escapes earned her the nickname White Mouse. Someone
has suggested that she was too gorgeous to arouse suspicion among the Germans,
who would have expected someone more “butch”. She was, however, captured in
Toulouse in 1943 while trying to escaping from France over the Pyrenees, and was
only released thanks to the machinations of the ‘Scarlet Pimpernel of WWII’,
Patrick O’Leary. She then went to England where she was trained as a spy by
Britain’s Special Operations Executive, returning to France to work with the
Resistance in preparation for the D-Day landings in Normandy.

In one heroic episode she pedalled more than 200 km and back
to replace radio codes destroyed in a German raid and necessary for drops of
weapons and supplies. “The blokes didn’t think I would ever get back,” she long
after recalled. “I only volunteered for it not because I’m brave but because I
was the only one who could do it, being a woman. I got back and they said, ‘How
are you?’ I cried. I couldn’t stand up, I couldn’t sit down. I couldn’t do
anything. I just cried.” She was a woman, after all.

Nancy Wake became the Allies’ most decorated World War II servicewoman.
France gave her the Legion of Honour, three Croix de Guerre and a Resistance Medal.
She also received Britain’s George Medal, the US Medal of Freedom, and other
honours later in Australia. She was a heroine, but Nancy Wake was no Florence
Nightingale. Her Australian biographer, Peter Fitzsimons, recalled in an
interview this week that she had a “prickly nature” and could swear like a
trooper. But he admired the “force of nature” that was like a volcano wanting
to burst from her; she was a “born leader” he said; a warrior. The right woman
for the time and the place where she served with such distinction.

She continued to work with the SOE after the war, working at
the British Air Ministry in the Intelligence Department. In 1960 she married a
former prisoner of war, Englishman John Forward, and returned to Australia to
live. In 1960 Bernadine Healy was
still at high school. It would be 10 years before she graduated from Harvard Medical
School, and another 12 years after that before she became a professor of
cardiology at Johns Hopkins University. While Nancy Wake’s war heroism was
crammed into five short, dramatic years, Dr Healy’s service to medicine, women
and public administration would extend over more than three to four decades —
long enough to experience opposition as well as acclaim, failure as well as
success.

In 1991 she was appointed by President George Bush the elder
as the first woman to head the National Institutes of Health and during the next
two or three years did all she could to make women’s health issues,
particularly heart disease, more visible in that vast research organisation. “The
problem is to convince both lay and medical sectors that coronary heart disease
is also a women’s disease, not a man’s disease in disguise,” she wrote.

She began the Women’s Health Initiative, a $625 million
study of the causes, prevention and treatment of heart disease, osteoporosis
and cancer in middle-aged and older women. It was this work that eventually
showed that prolonged hormone replacement therapy in postmenopausal women
increased risks of breast cancer, stroke and heart attacks. She mandated the
inclusion of women in clinical trials wherever appropriate.

And she did it, apparently, without fear or favour. “I am
ready to go out on a limb, shake the tree and even take a few bruises,” she
told reporters. “I’m not particularly concerned about being popular.” Just as
well, because her cause was not broadly supported in the NIH at the time,
according to the New York Times. And worse was to come when in 1999 she took
over the leadership of the Red Cross, a huge, unwieldy and divided organisation
that she tried to reform without success. Publicly criticised over her handling
of disaster relief following the September 11 terrorist attacks, she was forced
to resign.

What is really admirable is that from 1998 she was battling
a brain tumour but did not let this stop her professional work. A column she
wrote in the US News and World Report from 2004 to 2008 also shows the mother
of two daughters (from two marriages) endeavouring to foster good values as
well as good medicine.

In one piece from 2008
she speaks plainly about sexual behaviour leading to the spread of the human
papillomavirus and the cancers, including cervical cancer, associated with it
— a forthrightness not characteristic of the Gardasil grenadiers. In another, headed, “On Teens and Sex: Where’s the
Love”, we hear her anxiety about the lack of guidance being given young people
who are risking their health and happiness with reckless sexual activity:

Sex education in schools is beset with endless debate about
abstinence only versus safe sex. What’s missing and sorely needed is a focus on
love and ennobling sexual intimacy as immutable currents in human life. Both as
doctor and mother, I can’t help but believe that our anything-goes society, in
which impulses are immediately satisfied and sex is divorced from love and
bonding, is simply not healthy physically, emotionally, or spiritually.

Who is to say that the strength of character required to
pursue one’s profession so publicly, risking unpopularity, sticking to one’s convictions
over many years, is less heroic than organising escape routes and evading Nazi
road blocks in occupied France? Both kinds of courage are needed at different
times and the professional kind is what we need most today when the enemies of
civilisation are more likely to be bureaucratic inertia and self-interested careerism
than invaders armed to the teeth.

No doubt Bernadine Healy, like Nancy Wake, had her faults,
but we can be grateful that both of them showed us that it is possible to
commit oneself to action and see it through.