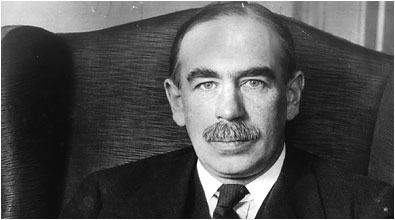 John Maynard Keynes, the last century’s most famous economist, was in the news this week. Harvard’s celebrity economic historian Niall Ferguson was addressing the Altegris strategic investment conference in California, an event for investors and financial analysts, when he was asked a question about Keynes’s impact upon modern economies.

To the consternation of his audience, he said that the great man’s economic theories had been influenced by his homosexuality: as a childless man he cared little for future generations. According to notes from a finance reporter he said:

“Keynes was a homosexual and had no intention of having children. We are NOT dead in the long run… our children are our progeny. It is the economic ideals of Keynes that have gotten us into the problems of today. Short term fixes, with a neglect of the long run, leads to the continuous cycles of booms and busts. Economies that pursue such short term solutions have always suffered not only decline, but destruction, in the long run.”

His remarks prompted a lot of hostile discussion in the media. Subsequently Ferguson later offered “an unqualified apology” on his blog.

The thesis of the influence of homosexuality on Keynes’ thought was proposed by Charles Hession in his 1984 book John Maynard Keynes. Ted Winslow also emphasised this point in a 1990 article in the journal Social Research.

But my feeling is that the key to understanding Keynes does not lie here. Rather, it is the ethical worries of the Bloomsbury group which helped Keynes to develop the philosophical theories which are at the root of his economic thought.

However, this storm in a teapot over the sexual orientation of the great economist may serve a positive purpose. It ought to remind us that the economy is not just about economics. As a human reality the economy is subjected to a multitude of influences, but the academic discipline of economics normally only takes economic arguments into account.

In addition, the current trend in economics is to examine all human activity through a narrow economic perspective. Input from other social sciences, psychology and sociology is systematically excluded as the logic of economics is substituted for the logic of social sciences. To get the flavour of this, just check out the blog Freakonomics, where economist Steven D. Levitt and journalist Stephen J. Dubner offer an economic explanation of everything from child abuse to the Kentucky Derby.

This is what has been called the “scientific imperialism of economics”, a research program that has predominated from the second part of the 20th century. It has originated concepts or disciplines such as law and economics, human and social capital, the economics of crime, the economics of the family, the constitutional political economy, and the economics of religion.

Today, however, we are in the twilight of homo economicus. Economists are realising that they need import insights from other social sciences rather than export the logic of economics to them.

The referee for a fruitful interchange among these disciplines is ethics.

In recent years, and particularly after the global financial crisis, many economists have turned to the father of the systematic study of both economics and ethics, Aristotle. A good example is the publication last year of Reckoning with Markets: The Role of Moral Reflection in Economics, by James Halteman and Edd S. Noell. They argue that economics is not a “value-free” discipline and that it has always incorporated moral reflection into its equations and diagrams. One chapter deals almost entirely with Aristotle’s contribution to economics.

Robert and Edward Skidelsky published another widely-discussed book last year which was based on Aristotle’s notion of the good life. In How Much is Enough?: Money and the Good Life the father and son team contend that something is wrong if we work harder and hard but enjoy life less and less. Arguing that economics is essentially a moral science, they trace the notion of “the good life” from Aristotle to Keynes.

And then there is Michael Sandel’s book What Money Can’t Buy: The Moral Limits of Markets, also published last year, in which the popular Harvard professor rings alarm bells about our drift from being a market economy to a market society. (See the MercatorNet review here.)

The list gets longer: Debra Satz, of Stanford University; the late Albert Hirschman; Deirdre McCloskey; and very especially the winner of the 1998 Nobel Prize in economics, Amartya Sen. Most of these authors use Aristotle as a reference point.

Why Aristotle? Joseph Schumpeter answers this question in his magisterial History of Economic Analysis:

“But only a small part of his analytic performance is concerned with economic problems. His main work as well as his main interest, so far as social phenomena are concerned, was in the field we have decided to call economic sociology or rather it was in the field of political sociology to which he subordinated both economic sociology and technical economics. It is as a treatise or textbook on state and society that his Politics must be appraised. And his Nicomachean Ethics—a comprehensive treatise on human Behavior presented from the normative angle—also deals so preponderantly with political man, with man in the city-state, that it should be considered as a companion volume to the Politics, making up together with the latter the first known systematic presentation of a unitary Social Science.”

This is what modern economists appreciate in Aristotle: he does not deal with the economy in isolation, but as part of the reality of politics. This is why it requires interdisciplinary attention and analysis. The loss of this unity is at the root of our political, social and economic crises.

And to some extent, Keynes was a forerunner of the revival of the ethical dimension of economics. Because he drifted into economics as a career, it is often forgotten that he studied philosophy at Cambridge. As a member of the Bloomsbury Group, he was immersed in an environment which esteemed lively discussion of philosophy, metaphysics, aesthetics, ethics and mathematics.

The Bloomsbury group, although its members had complicated personal lives, was centred on an essentially moral concern. Was it possible to create an authentic alternative to the decadent and hypocritical Victorian ethical system? The young Keynes began his research into inductive logic from a fundamentally ethical position.

As far his economics goes, the fact of his homosexuality is a red herring. My feeling is that it had no substantial influence upon the formation of his economic theories. What did matter, however, is that he placed an ethical system at the heart of economics. That is an insight on which contemporary economists can build.

Ricardo Crespo is professor of economics at IAE Business School in Buenos Aires, Argentina. He is the author of El Pensamiento Filosófico de Keynes: Descubrir la Melodía, a study of the philosophical underpinnings of Keynes’s thought. He has also written on Keynes in the European Journal of the History of Economic Thought. This year he published Theoretical and Practical Reason in Economics. Capacities and Capabilities (Springer). Another book, A Re-assessment of Aristotle’s Economic Thought will be published in October (Routledge).

Ricardo Crespo is professor of economics at IAE Business School in Buenos Aires, Argentina. He is the author of El Pensamiento Filosófico de Keynes: Descubrir la Melodía, a study of the philosophical... More by Ricardo Crespo