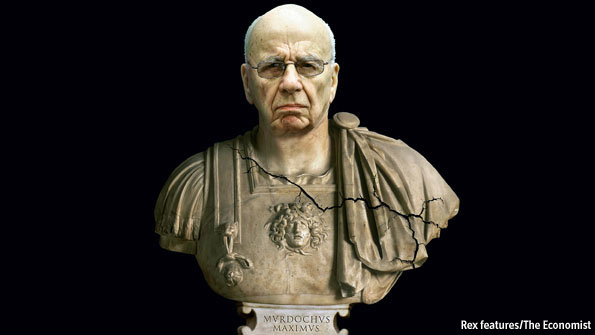 The explosion
of revulsion at the Murdoch newspapers after revelations of phone-hacking is astonishing.
When was the last time such an orgy of moral outrage gripped Britain? Perhaps
you have to reach back to the sadistic Moors murders in the early 60s or the
murder of James Bulger by two ten-year-old boys in 1993. The grasping,
despotic, vulgar, sinister incubus whose name was Rupert Murdoch was strangling
Britain’s political life and corrupting civil society. “At the apex of British public life there have been men and
women walking around with small icicles of fear in their hearts,” writes Timothy
Garton Ash about the “putrid quagmire of the hacking scandal”.

The revulsion has
crossed the Atlantic. “It’s
hard to imagine the power that he exerted on politicians,” said MSNBC’s Martin Bashir . “Imagine a combination
of Jack Abramoff, the lobbyist, and someone like James ‘Whitey’ Bulger, the
mobster. And what he had was the power to reward and to punish.”

Perhaps a helpful comparison is the 1989
revolution in Romania.
In a single astonishing week Nicolae Ceauşescu and his wife
Elena fell from dictators to victims of a firing squad to the cheers of their
former subjects. Collaborators and stooges rediscovered their consciences and
integrity, just as Britain’s political elite has suddenly discovered that their
tongues are useful for denouncing abuses of the tabloid press, not just for cocktail
banter at News Corp soirees.

But if this is the way that
Britain’s elite does moral outrage, something is terribly impoverished about it.

Consider this. There was
nothing special about the News of the World. It was simply primus inter pares
in British gutter journalism. Factoids,
fungoids, paranoids, and haemorrhoids: tabloids keep good company in the
dictionary. There was no secret about the degrading moral qualities of NOTW and
competitors like The Sun, the Daily Star, and the Daily Express. They were
bottom-feeders sucking up everything that was tasteless, prurient, salacious
and vulgar in British life. Their lifeblood was the invasion of celebrities’
privacy.

But how many of the great and good
denounced the “rotten values” of the tabloid press? It wasn’t
just that an icicle of fear had frozen their tongues. It was that they had no words
for it. In contemporary Britain, one cannot denounce pornography or prurience
as w-r-o-n-g or even r-o-t-t-e-n. Horses for courses. Different strokes for
different folks. Vulgarity is simply part of the rich tapestry of contemporary social
life.

To call something wrong, a law must be
broken.

Anonymous informants to the New York
Times have passed on a
gem which illustrates this. Lady
Claudia Rothermere, the wife of the billionaire owner of The Daily Mail, recently
disputed a dinner party claim by the controversial former editor of the News of
the World, Rebekah Brooks. Her husband’s paper was just as down and dirty as
The News of the World said Ms Brooks. “We didn’t break the law,” Lady
Rothermere sniffed. Just who do you think you are, retorted Ms Brooks, Mother
Teresa?

How about Gordon Brown’s incandescent
outrage in Parliament? The Guardian discovered that The Sun, another Murdoch
tabloid edited at the time by Ms Brooks, had used “criminal tactics” to obtain
medical records showing that his infant son Fraser had cystic fibrosis. Ms
Brooks splashed this news across her front page in November 2006.  The former
prime minister and his wife shed bitter tears at the violation of their child’s
privacy.

“Brown’s sick babies targeted by
hackers”; “Gordon’s baby was targeted” and “My son’s
medical records were hacked, says Brown,” were the headlines in London
newspapers last week. The story became one of the major sources of outrage
fuelling allegations that Rupert Murdoch’s News Corp was a criminal enterprise.

However, the Guardian got it wrong. The
Sun learned that Fraser had cystic fibrosis from a member of the public whose
son also suffered from the condition. It had a sworn affadavit to prove it. The Guardian apologised (on page 36). At that point media
interest in Gordon and Sarah Brown’s tears dried up. Publishing anonymous
tittle-tattle is not a crime. No crime, no story.

Here you have to sympathise with the Browns. There certainly
had been an affront to basic human decency and to their fundamental right to privacy.
As Brown told the House of Commons, people’s “private and innermost feelings and their private tears [were]
bought and sold by News International for commercial gain”. This was
cynical and callous.

But until News of the World reporters
overstepped the line and began hacking phones, it could not be regarded as professionally
unethical.

This is what happens when good and bad,
right and wrong, are shut out of public discourse and the only immorality becomes
breaching laws and flouting regulations.

This also explains why the revelation that Milly Dowling’s
phone had been hacked was so incendiary. The News of the World and the other
tabloids had obviously been exploiting the grief of the murdered girl’s family.
They were invading their privacy simply by forcing them onto the front page. All
this was indecent, utterly indecent, but it broke no laws. It was only when the
Guardian disclosed that something
illegal — phone hacking — was involved
that a Krakatoa of moral revulsion exploded.

More regulation is not going to make
British journalism more decent. What is needed is a deeper sense of ethics and
decency amongst journalists, not a keener appreciation of exactly how far they
can go before they break the law.

Less Murdoch is not necessarily going
to make British journalism more decent either. The buzz in financial circles is
that News Corp may sell its newspapers in Britain. They are mired in scandal
and less profitable than the company’s television interests. But who would buy
them? One possibility is ex-KGB officer Alexander Lebedev and his son Evgeny. They already own the Evening Standard and The Independent.
Media analyst Matthew Doull says
that other Russian oligarchs, Chinese interests or oil-rich sheiks might be
interested in buying up Britain’s biggest-selling tabloid, The Sun, or its
oldest, The Times.

How decent will their journalists
be?

So a new day is dawning after Murdoch’s “tyranny”. But those
who are cheering the collapse of the Ancien Régime may live to have second thoughts. The Committee of Public Safety rescued France from Louis XVI. Will a
pornographer rescue Britain?


Michael Cook
is editor of MercatorNet.