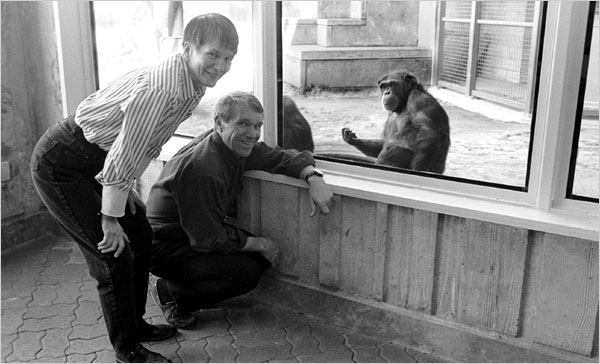 As I read the New York Times headline "Washoe, a Chimp of Many Words Dies at 42", I couldn’t help but wonder what Washoe’s last "words" were. I’ll bet that Washoe signed something like "tickle me" or "banana, please" and not "why am I dying?" or "what will it be like when I am dead?"

Why do I say that? Washoe was regarded by many as the first non-human to communicate in a human language, American Sign Language. But for all the exposure to language that Washoe received, there is no convincing evidence that it (or any other ape) employed signs to express thoughts or acquire new thoughts. As the authors of Primate Cognition, Michael Tomasello and Josep Call, note: "It is well known that the productions of these apes are almost invariably requests (one estimate is 95 per cent) and that the intention behind those productions that are not requests is difficult to discern."

The simplest explanation for this is that apes have no thoughts to express. They produce signs chiefly to obtain things they want in a manner similar to pigeons pressing the correctly coloured button to get a food reward. Notoriously absent from the transcripts of ape "utterances" is anything that constitutes a conversation geared to gaining an understanding of some aspect of the world simply for the sake of understanding. It is not Washoe’s failure to produce a deathbed discourse like that of Socrates while "surrounded by staff members and other primates who had been close to her" or even Washoe’s failure to ask some simple question about its imminent death that makes us question its capacity for abstract thought.

It is that Washoe and other linguistically trained apes never ask the sort of "why" questions children spontaneously ask in order to increase their understanding of the world. The apes’ world is limited to things that can be sensed and imagined; the human world is a world of ideas as well.

Washoe was one of the first of a series of apes that scientists tried to teach language to. Common sense indicated that this would be a hopeless endeavour. As linguist Noam Chomsky puts it: "It would be something of a biological miracle if we were to discover that some other species had a similar capacity [for language] but had never thought to put it to use, despite the remarkable advantages it would confer, until instructed by humans to do so — rather as if we were to discover in some remote area a species of bird that had the capacity of flight but had never thought to fly."

The language studies with apes have nonetheless contributed to our knowledge by forcing us to clarify our understanding of what mind, thought, and language are. They uncovered behaviours that appear surprising at first sight. For example, the chimp Loulis learned two dozen signs not from humans, but from the chimps Washoe and Ally. And the bonobo Kanzi learned how to use a keyboard simply by watching its mother use it. The chimp Nim sometimes signed to himself while flipping through magazines.

However these behaviours are neither as mysterious nor human-like as they may first seem. Just an ape can learn to associate a sign with a reward because it itself is given the reward it can do so because it observes that another chimp who has made that sign has gotten a reward. And once chimps get into the habit of doing something, habit being second nature renders the habitual activity agreeable to them. Even dogs, once they have learned to associate "sit" with being rewarded when they sit, will generally obey the command even when it is no longer rewarded. At the time of the first ape studies the popular press broadcast one-sided claims about the apes’ linguistic ability. Of late though, it is more even-handed in reporting that many mainstream scientists reject the claim that the apes are true language users in light of evidence such as the apes’ lack of conversational ability.

So, while I acknowledge that Washoe was an amazing chimp, I do not think that a eulogy is in order. A eulogy supposes that the individual has character, and to have character supposes that one can act according to principle. Washoe’s inability to grasp abstract principles, moral or other, makes it impossible to regard it as a moral agent. We can be grateful for the things we learned from observing Washoe; we cannot reasonably extend to this chimp the sort of tribute that belongs only to persons.

Marie I. George is Professor of Philosophy at St. John’s University, New York. An Aristotelian-Thomist, she holds a PhD from Laval University, and a MA in biology from Queens College, NY. She has received a number of awards from the Templeton Foundation for her work in science and religion.