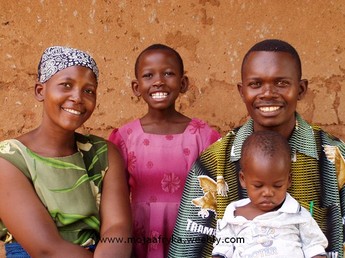 “One can be poor in spirituality, poor in ideas, poor in education, and in many other ways.”

Who is speaking with such bold clarity, and to whom? Nigerian Archbishop Ignatius Kaigama, to a Vatican press briefing during a break in the Extraordinary Synod on the Family.

What he said is compelling.

We are confronted with some issues, and sometimes [they are] quite perplexing. We recently had a big conference on pro-life issues, and in that conference, we came out very clearly to ascertain the fact that life is sacred, marriage is scared, and the family has dignity.

We get international organizations, countries, and groups which like to entice us to deviate from our cultural practices, traditions, and even our religious beliefs. And this is because of their belief that their views should be our views. Their opinions and their concept of life should be ours.

We say, “No we have come of age.” Most countries in Africa are independent for 50, 60, 100 years. We should be allowed to think for ourselves. We should be able to define: What is marriage? What makes the family? When does life begin? We should have answers to those [questions].

We are wooed by economic things. We are told, “If you limit your population, we’re going to give you so much.” And we tell them, “Who tells you that our population is overgrown?” In the first place, children die — infant mortality — we die in inter-tribal wars, and diseases of all kinds. And yet, you come with money to say, “Decrease your population; we will give you economic help.”

Now you come to tell us about reproductive rights, and you give us condoms and artificial contraceptives. Those are not the things we want. We want food, we want education, we want good roads, regular light, and so on. Good health care.

We have been offered the wrong things, and we are expected to accept simply because they think we are poor. And we are saying poverty is not about money. One can be poor in spirituality, poor in ideas, poor in education, and in many other ways.

So we are not poor in that sense. We may be poor materially but we are not poor in every sense. So we say no to what we think is wrong. And time has gone when we would just follow without question. Now, we question. We evaluate. We decide. We ask questions. This is what we do in Africa now.

Reading that, I wanted to stand up and cheer. Where are we hearing such strong voices of clarity and conviction these days?

This is an important voice and message, and we need to pay it respectful attention. Note what Vatican analyst George Weigel said in this piece ahead of the Synod.

The collapse of marriage culture throughout the world is indisputable. More and more marriages end in divorce, even as increasing numbers of couples simply ignore marriage, cohabit, and procreate. The effort to redefine “marriage” as what we know it isn’t, and to enforce that redefinition by coercive state power, is well-advanced in the West. The contraceptive mentality has seriously damaged the marriage culture, as have well-intentioned but ultimately flawed efforts to make divorce easier. The sexual free-fire zone of the West is a place where young people find it very hard to commit to a lifelong relationship that inevitably involves sacrificing one’s “autonomy.” And just as the Christian understanding of marriage is beginning to gain traction in Africa, where it is experienced as a liberating dimension of the Gospel, European theologians from dying local churches are trying to empty marriage of its covenantal character, reducing it to another form of contract.

The Christian understanding of marriage, which is the understanding of a sacramental covenant between man and woman is “beginning to gain traction in Africa, where it it experienced as”…what?…liberating. Imagine that.

It’s time the West becomes aware of and comes to terms with what we – through any number of proxies – have been exporting to Africa and other developing countries.

This Washington Post interview with Bill Gates is revealing.

Ezra Klein: Your letter talks a lot about the myth that aid will just lead to new problems through overpopulation. I was a bit surprised to read you focusing on it. Are fears around overpopulation an impediment in your day-to-day work?

Bill Gates: It’s a huge impediment in convincing rich-world donors that they should feel good about these health improvements. Our foundation focused in the 1990s on reproductive health. We weren’t nearly as big then. But we wanted to make contraception available because we thought population growth would make everything so difficult, whether it’s the environment or feeding kids or stability. It was only when we found out about this phenomenal connection between improved health and reduced population growth that we felt: Great, let’s just make the foundation as big as possible to go after these health problems. Because before then the commonsense thing was more kids would make these problems less tractable.

I don’t think people like to say out loud that we want to let these kids die because there are too many of them. But by choosing not to get into health in our early days I was a victim of the myth around overpopulation.

And here we are today:

Africans “have come of age,” said Nigerian Archbishop Ignatius Kaigama. “We should be allowed to think for ourselves.”

“We are wooed by economic things,” said Kaigama, who heads Nigeria’s Jos archdiocese. “We are told if you limit your population, we’re going to give you so much. And we tell them, ‘Who tells you that our population is overgrown?’”