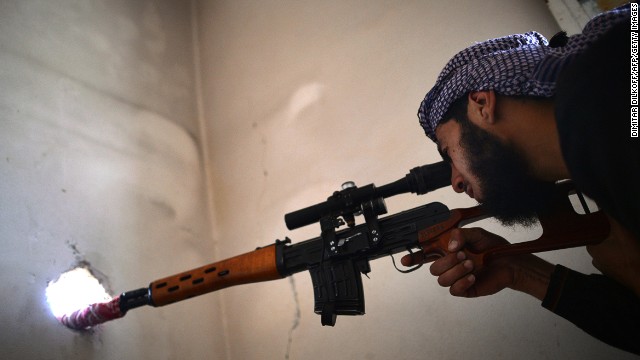 The hardest test of foreign policy is not its various intersections at the lofty geopolitical level, but where it inevitably impacts ordinary people.

For policy makers this is a very difficult place to reach. Even official visits to get the feel on the ground quickly become carefully choreographed events by sponsors determined to give an experience which supports their own agendas. And nowhere is this more the case than in the Middle East.

I was well aware that this is equally a trap for non-officials as I visited the Middle East recently trying to assess the situation of minorities in the Syrian conflict. But everything I experienced and heard shouted out that the current US policy in Syria is illogical.

Not that it surprised me. While my experience was dated, I had lived in the Middle East and observed at first-hand some of its most enduring conflicts, making it all the more concerning that the passage of time seemed to have taught us nothing.

Christians I met were not only dumbfounded, but alarmed that America could at the same time endure the Boston bombings at the hands of Islamists and yet confirm its support for a Syrian opposition dominated by al-Qaeda, which clearly inspired the atrocity.

Some level of confusion about Middle East politics is excusable for anyone. Attempts to decipher it are always muddied by a bewildering array of different sects and agendas and all in the context of alliances of convenience, even if between sworn enemies.

But surely an alliance with al-Qaeda is beyond the pale for any American government, even if its purpose is to counter Iran’s influence.

The pictures of the American family devastated by the Boston bomb would be enough for me, but the US Department of State certainly hasn’t spoken to the Syrian Christian refugees I have in the last week. Reports of heartbreak as people who lived in harmony for decades with hardly a thought of which religion each was, are suddenly turned to bitter enemies by the radicalisation of previously moderate Sunnis under the influence of the al-Qaeda proxy al-Nusra.

Syria had always been somewhat unique in the Arab world for its secularism and religious freedom.

Living in Damascus for six months myself I found Christian churches easy to find and join. There was also a ready acceptance by Muslims and Druze alike, many of whom became good friends. And although my experience was well dated, talking to refugees confirmed that it was still the case until the very moment of the revolution two years ago. Then cries of “Alawites out and Christians to Lebanon” suddenly filled the air in the hysteria that grips revolutionary crowds stirred by extremists.

Of course for Christians to be thrown out of Syria after more than 2000 years of history there is too much for most. Despite the steady flow of refugees, most will stay. Syria is their home, and they clearly feel it is their responsibility to remain in the land of the Apostle Paul’s conversion and to protect its holy places.

But the cost of staying is extreme.

Al-Nusra empties any area it captures of the Infidels. Occupants of centuries-old Christian quarters in places like the ancient cities of Alepo, Hama and Homs are turned out of their homes with nothing and the homes looted, unless of course they agree to fight for the rebels. The aged are not spared and those refusing to leave are sometimes killed.

Particularly heartbreaking for these ancient communities is that their churches in the occupied parts of these cities have been destroyed and desecrated, at least one ancient church being used as a toilet by al-Nusra, as a show of its utter contempt for Christianity.

There are of course some Christians fighting with the Free Syrian Army. For some it is doubtless a commitment to oppose Assad as a dictator, but refugees say for many it is a matter of survival for Christian communities isolated in rebel areas. A decision becoming more and more fraught as al-Nusra increasingly achieves the dominant influence in the rebel forces.

Refugees spoke of the growing depression among people living daily with the trauma and uncertainty of war and at the mercy of Islamist extremists, more often than not foreign. They told of how even a short road journey to work became too stressful to undertake despite the knowledge that once they gave up the job they could not replace it. Children are particularly vulnerable.

But as always in war it is perhaps the women who suffer most.

Al-Qaeda fighters see Christian women as little more than booty. One woman tearfully revealed a telephone call from a friend who having just heard of the rape of two of her friends by al-Nusra, knew this fate could as easily befall her. She said she was so depressed at the thought that she was considering suicide as much more acceptable than the dishonour of rape.

These are ancient Christian communities of Orthodox, Catholics and Evangelicals — mainly Presbyterians and Baptists. They are Christian communities which look to Western governments not to abandon them with policies so irrational that they would partner even with their own deadly opponents in al-Qaeda, foreign fighters who have gone to Syria for no other purpose than Jihad.

Equally it is long past time for the West to make a stand in two other areas that are essential to combating Muslim extremism both at home and abroad.

The first is that Saudi Arabia and Qatar who are funding the extremist al-Qaeda fighters must be told to back off. For too long Saudi oil money has funded extremism in Western countries through fundamentalist mosques and overseas through direct funding of terrorism. It is the elephant in the global security room that must be called.

In addition we cannot simply accept that as many as 200 Australians might be fighting for al-Qaeda in Syria as part of this even bigger contingent of foreign fighters drawn as much from Western Islamic communities as from Middle Eastern ones. All Western countries must pass anti-mercenary laws that will forbid their nationals from fighting as mercenaries without losing their nationality.

We have an army to fight our wars and that should be the only way an Australian gets to one as a combatant.

This would have the immediate effect of drawing down fighters from the estimated 10,000 al-Nusra extremist rebels fighting for al-Qaeda. It should include an amnesty period, but we would be well rid of those who don’t return for reducing the likelihood of home grown terrorism.

The so called Arab Spring was never going to be that for anyone but extremists across the Middle East. It has certainly proven itself a dark winter for the Copts of Egypt and now Syrian Christians.

The Islamists will not stop here, their next target will almost certainly be Lebanon, a country which has had its share of sectarian violence and doesn’t deserve to be thrown into that again because the West backs its own enemies against its friends in Syria.

But that would require a dose of common sense of the size the West has seldom put into its Middle East policy.

Jim Wallace is the deputy chairman of the Australian Christian lobby. A shorter version of this essay was originally published in The Australian.

Jim Wallace AM, is Deputy Chairman of the Board of the Australian Christian Lobby. Mr Wallace left the Army as a Brigadier in late 2000 after a 32-year career which included command of the SAS... More by Jim Wallace