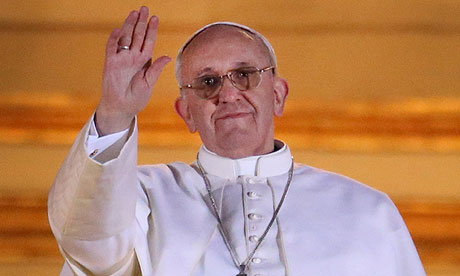 Habemus Papam. The first words of the proclamation that was just earlier signaled by the effusive white smoke billowing from the chimney rising out of the Sistine Chapel followed by the loudly chiming bells of St. Peter’s Basilica in Rome. Just enough time for people who weren’t already there to run to the square from all directions and be part of the world’s biggest celebratory love fest.

It’s very cool that in this day when some media called for the church to come up with the times and open the Sistine Chapel to cameras or set up an alert over digital media when they had elected a pope, centuries old tradition holds strong and we’re riveted globally on a smokestack watching for the color of the puffs that emerged, waiting eagerly and anxiously for the smoke to emerge. It’s a rich metaphor.

So on the fifth ballot of the Conclave, the global media was riveted on the smokestack, and a bird landed atop it at the right moment when camera closeups were fixed on it. Someone quickly set up a Twitter account for it as SistineSeagull.

Maybe it portended something. A pope who would be associated with a love of nature and birds in particular. Who knows.

The college of cardinals knew something about what the Church needed at this particular time in history, and the smoke signalled the election of a humble Jesuit.

The 76-year-old Bergoglio, who served as the archbishop of Buenos Aires, is the first pope to take the name in honor of St. Francis of Assisi, revered among Catholics for his work with the poor. St. Francis is viewed as a reformer of the church, answering God’s call to “repair my church in ruins.”

The pontiff is considered a straight shooter who calls things as he sees them, and a follower of the church’s most social conservative wing.

As a cardinal, he clashed with the government of Argentine President Cristina Fernandez de Kirchner over his opposition to gay marriage and free distribution of contraceptives.

Latin America is home to 480 million Catholics. By choosing Bergoglio, the cardinals sent a strong message about where the future of the church may lie.

According to a profile by CNN Vatican analyst John Allen and published by the National Catholic Reporter, Francis was born in Buenos Aires to an Italian immigrant father.

He is known for his simplicity. He chose to live in an apartment rather that the archbishop’s palace, passed on a chauffeured limousine, took the bus to work and cooked his own meals, Allen wrote.

Francis has a reputation for being a voice for the poor.

It was a jaw dropper for just about everyone outside the Sistine Chapel, including longtime Vatican watchers.

Bergoglio’s selection of the name of Pope Francis is “the most stunning” choice and “precedent shattering,” Allen said. “The new pope is sending a signal that this will not be business as usual.”

I already felt that the choice was directed, as the Catholic Church prays and believes, by the Holy Spirit. When the media are all over the top 10 or so contenders and hitting on that topic day after day, they are preparing the way for the eventual leader who fits their bill. This was a curve ball.

One of my sources speculated that Chicago’s highly respected Cardinal Francis George played a major role in this election.

But George said the choice of Bergoglio was unexpected. During the extended conversations shared in the cardinals’ general congregation, Bergoglio’s name never came up, he said. But when the ballots were counted by the conclave Wednesday morning, the path to electing Bergoglio seemed clear, George said.

Which only added to the spiritual direction of this conclave.

“Most of all, he is a man who has a heart for the poor,” George said. “Cardinal Bergoglio, now Francis our pope, is well-known in Buenos Aires for his life with the poor, which has sometimes gotten him into some conflict with his own government. Nonetheless, it’s been consistent. He lives with the poor, and that is I think the reason why he chose the name Francis.

“I think it all came together in an extraordinary fashion,” George added. “I wouldn’t have expected it to happen either this fast or even the way it developed in terms of the choices available to us. I believe the Holy Spirit makes clear which way we should go. And we went that way very quickly.”

Who is this new pope? Rome Reports.

Besides that, here’s a hastily pulled together report on the new pastor in chief, and it’s a good one. Papal biographer George Weigel, who has done analysis these past few weeks for NBC News, keeps calling this a ‘hinge moment’ in the church, in which it’s turning a corner and beginning a new era of reform in the 21st centuary when ‘Evangelical Catholicism’ will propose a new face to the world. Read the First Things post at that link. It’s loaded with links to other good information.

“He will be a great defender of religion around the world.”

“The papacy has moved to the New World. The church has a new pope with a new name,” he added. “I think it speaks to the church’s commitment to the poor of the world and compassion in a world that often needs a lot of healing.”

Finally, Pope Francis’ episcopal motto was “miserando atque eligendo” (lowly and yet chosen)—which sounds like the feeling he must have as he ascends to the papacy.

It’s a new day, and the beginning of a new era.