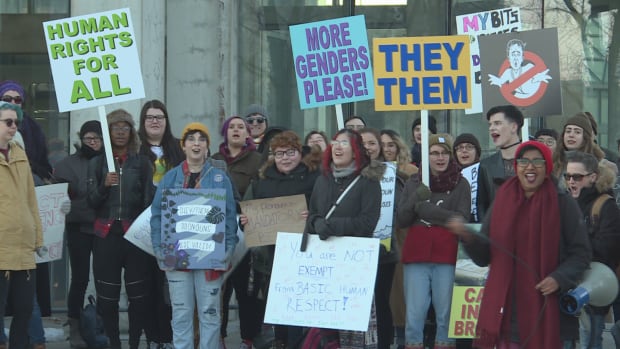 Arriving at the National Gallery in Ottawa for a recent lecture, I was greeted by protesters I assumed were perhaps upset about representational imbalance between Warhols and Watteaus on the walls.

But, what ho? It turned out they were transgender activists and friends, which they let the world know by chanting: “We’re here, we’re queer, get Peterson out of here!” as well as “Gender Defenders!” and, somewhat incongruously hors-de-context,  “Black Lives Matter!”

The chants were aimed at – or provoked by, depending on your perspective – the evening’s speaker, Dr. Jordan Peterson. The University of Toronto professor had been invited by the Gallery months earlier to talk about the psychology of creativity, a subject on which he has a specific research interest. He has co-authored more than 100 academic papers on it, and spoken about it at scientific conferences across North America.

The invitation went out, however, before Peterson gained international attention by refusing to use “preferred pronouns of trans- and gender-non-conforming persons” at the U of T, and by offering nuanced criticism of Bill C-16, the first piece of Canadian legislation that could compel people to use a State-mandated vocabulary.

His subsequent explosive popularity has led to near-celebrity status, dubbed by some the Peterson Phenomenon. It has led to speaking engagements across the continent, and standing ovations in some venues. It has also sparked contrary efforts to, in the jargon of the day, “de-platform” him, and protest the polarizing professor’s presence wherever he goes.

Protests and coordinated attempts to shut down venues where he speaks are not reserved for those where he addresses gender identity and sexuality.  They erupt in the name of intersectionality, which is said to justify suppressing any speaking engagement that he is involved in, no matter the topic.

For the uninitiated, “intersectionality” is a worldview currently being fostered in many Western academic institutions. It is a convoluted lens through which all of human experience is explained via the classic Marxist categorizations of oppressor and oppressed. Moving beyond economics, it posits that social oppression does not apply simply to single categories of identity such as race, gender, sexual orientation, class, etc. It covers all of them in an interdependent system of privilege, hierarchy and power. Against classical Marxism, it offers no unified vision, no utopia, indeed, only an inevitable fracturing of human identity complemented by squabbling over who is the most “oppressed.”

Not unsurprisingly, Peterson does not see himself as oppressing anyone. For him, the primary issue at hand relates to State-compelled speech. The topic upon which the language itself focuses, while important, is secondary. Transgender activists and their friends are wont to disagree. A lot. Very loudly.

They deem him “transphobic” and by that designation find that he must, through the logic of intersectionality, also be racist, sexist, homophobic, ableist, classist, and whatever other “ists” the ever-expanding list might contain.

Interestingly enough, members of the U of T Administration (lovingly referred to by devotees of intersectionality as “The System”), including the Chair of the Department of Psychology, the Dean of the Faculty of Arts and Science, and the Vice-Provost of Faculty and Academic Life sent Peterson two letters last fall attempting to curb his ability to speak to this topic, and urging him in light of “the requirements of the Ontario Human Rights Code…to stop repeating these statements.”

A result – who could have predicted this? – is that Peterson began speaking out even more, and his opponents doubled-down on their efforts to shut him down.

The irony of the situation seems to have escaped proponents of intersectionality, wherein a minority opposing voice is being oppressed by the administration of a public institution. Supporters of intersectionality seem to be so obsessed with the politics of self-identification and victimhood that it appears that they no longer understand how to form social consensus outside of their safe spaces.

Certainly, some protestors outside the National Gallery were iron clad in their conviction that the mere spectre of Peterson passing through the building had a transformative effect powerful enough to cause its physical and spiritual matter to mutate dangerously.

“Art has always been a safe space for queer people, people of colour and marginalized people in general,” one Carleton University Student told the CBC.  “We don’t feel safe coming to the National Gallery of Canada anymore.”

Yet there they were standing at its door, affirming Rex Murphy’s insistence in his recent Convivium article, Educated Fleas , that the only function of North American universities today is “to explore gender identities, provide hugs and hot cocoa for coddled inmates, and perform a total mockery, under the banners of diversity and sensitivity, of the entire intellectual tradition of the West since Aristotle and Plato.”

In reality, aside from its exhibited work Trans-Am Apocalypse No. 2 roaring to life and running someone over, there isn’t much danger to be found in the National Gallery of Canada. Beyond that, art has never been about maintaining safe spaces for anyone anyway. It is not merely the by-product of warm feelings and pretty pictures. Art is the process through which a message is discovered within and derived from human creativity, what Peterson referred to in his lecture as a translation and representation of the unknown, on the border of order and chaos.

This flow of information is guided by an artist’s vision to be carved in stone, presented on canvas, or played on instruments. Due to its transcendence, that message speaks to the nature of our humanity, helping us perceive both individually and collectively what is true and beautiful. The process is often challenging, even uncomfortable.

By contrast, those who claim to occupy the “right to creativity,” so to speak, demonstrate few characteristics of artists. They appear almost absurdly uninterested in ideas or aesthetics when those concepts challenge their particular way of thinking. While trying to portray themselves as the vanguard of art – on the basis of a disagreement pertaining to State-mandated language – they risk taking on the mantle of stagnation. They seem to have lost interest in ideas, exchange, or building compromise: they reject nuance on the basis of ideology.

The last point underscores why the so-called Peterson Phenomenon must matter for Canadians. The controversy swirling around him further sheds light on the way students are being encouraged by academic institutions to scream and shout and ban ideas that challenge accepted ways of thinking, rather than engaging with differing points of view. Rational debate, common discourse, and openness to dissent are hallmarks of the way democratic societies identify issues, discuss them, and come to consensus.

If even universities begin stifling the intellectual creativity of students and faculty, the Peterson Phenomenon will have much more to reveal about the state of Canadian society.

Brent McCamon is an Ottawa-based writer. Republished with permission from Convivium, a Canadian online hub for faith and common life.