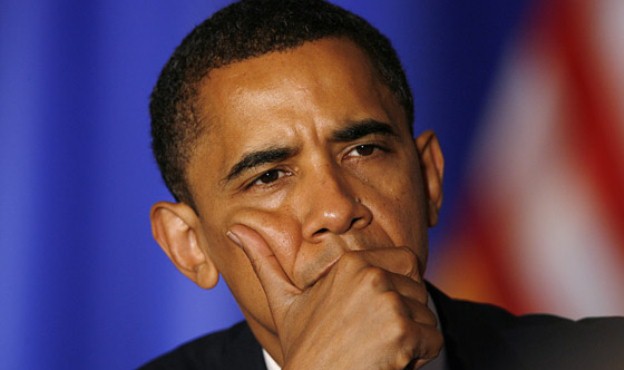 He already holds fewer press conferences and leaves little opportunity open for spontaneous questions. But he might be re-thinking the townhall format next. These are highly staged gatherings arranged for President Obama to sell his ideas to specially selected supporters. But even they are turning their frustration on him.

The townhall today in Washington was extraordinary.

It was billed as “Investing In America,” a live televised conversation between President Obama and American workers, students, business people and retirees on the state of the economy, a kind of Wall Street to Main Street reality check.

But it sounded like a therapy session for disillusioned Obama supporters.

In question after question in Monday’s one-hour session, which took place at the Newseum here and was televised on CNBC, Mr. Obama was confronted by people who said, in short, that they had expected more from him. People from Main Street wanted to know if the American dream still lived for them.

“I’m exhausted of defending you, defending your administration, defending the mantle of change that I voted for,” said the first questioner, an African-American woman who identified herself as a chief financial officer, a mother and a military veteran. “I’ve been told that I voted for a man who was going to change things in a meaningful way for the middle class, and I’m waiting, sir, I’m waiting. I still don’t feel it yet.”

A 30-year-old law school graduate, Ted Brassfield, told Mr. Obama he had hoped to pursue a career in public service — like the president — but could barely pay the interest on his student loans, let alone think of getting married or starting a family.

“I was really inspired by you and your campaign and the message you brought, and that inspiration is dying away,” Mr. Brassfield said, adding, “What I really want to know is: Is the American dream dead for me?”

The was a spontaneous eruption of frustration from one ’supporter’ after another.

And a third-generation business owner from Pennsylvania, Walter Allen, told Mr. Obama that his biggest challenge as an entrepreneur was a fearful, negative public. “How can you regain the political center?” Mr. Allen asked plaintively. “You’re losing the war of sound bites. You’re losing the media cycles.”

The extraordinarily personal tone of Monday’s conversation, coupled with more substantive policy questions from the session’s host, John Harwood of CNBC and The New York Times, reflects the erosion of support for Mr. Obama among the constituencies that propelled him into office two years ago.

As he leads his party into a midterm election that many analysts expect to be devastating for Democrats, the president faces overwhelming skepticism from Americans on his handling of the economy. A recent New York Times poll found that 57 percent of respondents believed that the president did not have a clear plan for fixing the nation’s broken economy.

Mr. Obama sought on Monday to address those concerns, telling his business critics that he was not anti-Wall Street and his middle-class questioners that “there are a whole host of things we’ve put in place to make your life better.”

But the rhetoric wasn’t convincing.

Some parts of the business community complain Obama is vilifying them and this sense of outrage is shared on Wall Street, which fiercely opposed his shake-up of financial regulations that became law earlier this year.

“I represent the Wall Street community,” said one man who runs a hedge fund. “We have felt like a pinata. Maybe you don’t feel like you’re whacking us with a stick, but we certainly feel like we’ve been whacked with a stick.”

This needs an airing, and because he’s usually sealed off and surrounded by his own team of advisors and administrators, he needs to hear it from the people who were his people in the last election. This is reality TV, more than anything concocted by network producers.

The president also laid down a challenge to the Tea Party movement, whose candidates have been defeating more mainstream Republicans in a string of recent primaries in Alaska, Delaware and other states. He said it was not enough for Tea Party candidates to campaign on a theme of smaller government; he tried to put them in an uncomfortable box by prodding them to offer specifics about just what programs they would cut.

“The challenge for the Tea Party movement is to identify specifically: What would you do?” the president said.

Now that’s just embarrassing. The Tea Party is not a structured political party, it’s a grassroots movement. It does not have a platform, defined leadership or any central power such as the Democratic National Committee or the Republican National Committee. It’s community organizing writ large. And facing some withering criticism from his own base, he’s ridiculing a movement of citizens motivated to exercise their roles and responsibilities in a representative republic. And challenging them to identify policy alternatives.

But now that he’s posed the question, he should listen to the response.