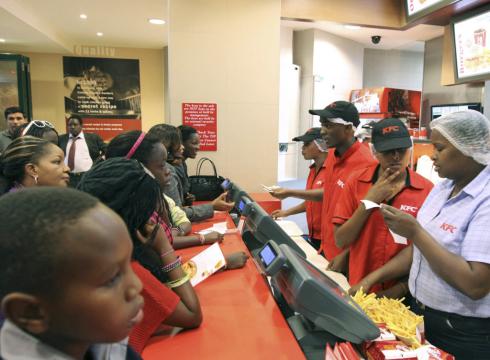 I have spent a total of less than five years in my home village, and therefore know very few of the people there, even extended family members. This, combined with my short-sightedness, has made me cross paths along the village roads with many people who expect me to know them without saluting them. When they do greet me, they are treated to the unpleasant surprise that I don’t know them by name. As a result, I have been labelled more than once as being rude.

In Africa, greetings are essential to the fabric of life, and culture is vibrant with greetings for all times, seasons and occasions. Greetings are not a luxury you get when you go for business meetings, they are expected of you whenever you meet with someone, anyone. The greeting themselves constitute a ceremony, and no business begins until everyone knows how the wife of uncle so and so is doing back where you come from. At least that is the case in the villages, and, it makes the villages very human places.

I now live in Nairobi, where I study at the university. The other day, I was running late in getting back to my hostel, and I knew I would find the mess hall closed. So I branched into a fast food restaurant to buy take-away fries and chicken. It was one of these seriously fast food places, part of a chain owned by someone who’s certainly enthusiastic about America, as evidenced by the American car number plates that adorned the walls and the glass-cased statue of a Wild West sheriff at the door.

The moment you enter, you are immediately aware of powerful jets of fresh air coming from a dozen or so chutes.. The place is cooled like the beach; only the wind is far stronger than the gentle sea breeze, and blows straight at your face, making your eyes smart. And they are very noisy. Then you get to the counter at the end of a speedily moving queue, and your money is accepted by a visibly overworked cashier who exhibits no reaction whatsoever to your greeting until you repeat it, whereupon she gives a begrudging reply and looks over your shoulder at the next customer while her free hand passes you the receipt and change.

The servers are just the same. But this time you have gotten wiser and decided to hold onto your greetings until you are out of the place. You take the stamped ticket and head over to the chicken section, where large chunks of genetically modified chicken parts revolve inside glass-windowed ovens. There, the attendant grabs your receipt without a word and, like a machine, cuts off a piece of the revolving chicken, drops it into a boiling pot of oil, fishes it out and chops it up into tiny bite-sized pieces, wraps it up and hands it over to you in less than a minute.

All this while, the constant loud whirr of the fans keeps voices muffled, preventing patrons from conversing with one another – another curious African tradition one would expect wherever people are gathered. Here, everyone is crouched over their food, busily chomping, a scene that is grotesque from whichever angle you look at it.

I was served in less than two minutes, and I was soon out on the street.

I have done this a number of times before, but it is this latest experience that somehow opened my eyes to the dehumanising effect of fast food. That a person, and an African at that, cannot have time for your greeting smack in the middle of Africa just because she’s part of a conveyor belt dispensing unhealthy food to many people, might seem normal to an outsider, or to someone who has grown up with the experience.

But looking at it from this side of the continent’s shores, it is a big deal. The employees of that establishment have effectively been turned into machines. Because of their fatigued and tight-lipped countenances, customers have become used to the idea of being served without either greeting or appreciation.

You go in, grab your portion of modern poison, and jump out into the street as soon as possible because the place is stifling and unfriendly to good-natured old-school banter. People don’t get the chance to talk to one another, and the intricate webs of friendships and acquaintances which are a defining feature of village Africa are never formed. Each person becomes an island unto himself, and people in a city with more than four million people end up being lonelier than the lowliest villager in a hamlet of a thousand people upcountry. No one knows or is known by anyone.

The situation is replicated in very many settings. At lunch the other day, I had a table of four to myself. A fellow student came and sat opposite me and, without saying a word, bowed his head, prayed for his food and started eating. He didn’t say a word until I greeted him and started a conversation, which we both enjoyed.

It is not uncommon now to find a matatu (public service vehicle) with fifty passengers, many of whom are bent of over the glowing screen of their phones, ears plugged by headphones. The rest cannot hear each other because the speakers are probably belching out some West Indian tune at eardrum-splitting decibels. Families have TVs in every room, and dinner – probably the only meal at which all members of incipient urban families are present – is had facing one of these boxes. Everyone is afraid to start up a conversation.

Now that China has seen more than half its population move into cities in the recent past, the next mass rural-urban migration is going, and in fact has begun, to happen in Africa. The African Development Bank estimates that the continent’s urban population will increase at an annual rate of 3.5 percent until 2050. At that rate, more than 50 percent of Africa will be living in urban areas by 2030, a figure which will hit 60 percent in 2060. Given the large size of Africa’s population and its high growth rate, this means the scale of the movement will only be rivalled by what has happened in China over the past few decades. The prospects are worrying.

Cities offer the promise of better jobs, physical amenities, infrastructure, education, and opportunities. But all this is coming at the cost of the community spirit which has defined Africa for pretty much all of its known history. Greetings, and many other cultural elements, are losing their meaning where and when they are perhaps most needed.

The West holds some tragic lessons for Africa concerning what happens when the sense of community is lost. News of old people dying in their homes, alone and with no one to care for them, undiscovered until months later, paint a scary picture of what happens when people forget one another.

I am not advocating that Africa stop urbanising. But it will be prudent for the continent’s city-dwellers to pause in the middle of all the rush to find out the value of what they are losing, and see if it can be salvaged.