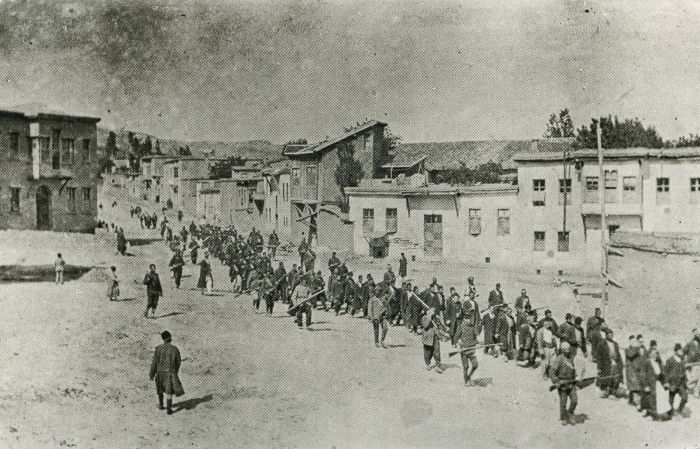 Armenian civilians on a march to a camp, guarded by Ottoman soldiers

One key to understanding how Pius XII responded to the Holocaust – both his hesitation to name both murderers and victims and his efforts to save as many lives as possible – is the Vatican’s diplomacy during World War I when Benedict XV (1914-22) unsuccessfully attempted to save the Armenians during the genocide of 1915-18 with a public protest.

I came to this conclusion after studying about 2,000 pages, entitled “persecuzioni contra gli Armeni”, in both the Archives of the Apostolic Delegation in Constantinople and the Secretary of State in the Vatican Secret Archives for an upcoming book[1], many of them for the first time.[2]

There is no doubt that Eugenio Pacelli (who became Pius XII in 1939) was extremely well informed about this dark chapter of World War I.[3] From 1914 he was Secretary of the Department of Extraordinary Ecclesiastical Affairs of the Holy See’s Secretariat of State. He became Undersecretary of State when Benedict XV named Cardinal Gasparri as Secretary of State. In this position he had prime access to all information on the Armenian genocide and indeed we find his characteristic handwriting on several documents dealing with it.

Being responsible for several Papal relief initiatives during the War, he was well-informed about it. In several cases, the Apostolic Delegate in Constantinople, Msgr. Angelo  Dolci, addressed Pacelli directly in his letters and reports to the Holy See.[4] Later on, when Benedict XV appointed Pacelli as Nuncio to Bavaria, Pacelli was involved in a diplomatic intervention to prevent further massacres after the Russian retreat from northeastern Turkey following the Brest-Litovsk treaty.[5]

Indeed, all biographers of Pius XII agree that the wartime diplomacy of Pope Benedict XV served as a model for Pius XII’s actions during World War II, when the “Pope of Peace”[6] served as his role model, especially in his stress on the Vatican’s “impartiality”.[7] But what did Pius XII learn from his experience with the Armenian genocide?

What was the Armenian genocide?

Under close scrutiny, the Armenian genocide appears like a model for the Shoah. Obsessed by a racist and nationalist world view, the Young Turks intended to transform the multi-national and multi-religious Ottoman Empire into a homogenous “Volksgemeinschaft” [community]. Since racial characteristics were difficult to determine in the mixed population of Turkey, religion became the indicator of “true Turkishness”. A “true Turk” had to follow Sunni Islam.

Only the “purity” of homogeneity would save Turkey from “inner microbes” and “parasites” and make it strong enough to fight for the pan-Turkish vision, a mythical Turkish “fatherland” named “Turan”, reaching from the shores of Europe into the west of China, the Caucasus and parts of Siberia. As “microbes” and “parasites”, the Panturanic ideologists identified the Christian minorities: Armenians, Greeks and Syriac Christians.[8]

Coming to power in a peaceful revolution in 1908, the Young Turk party “Ittihat ve Terraki” (Unity and Progress) originally promoted a modern, secular government. But shortly after, a counterrevolutionary coup d’etat of conservative and Islamist circles caused a strong reaction within the Ittihat party and the radicals took over.

Sultan Abdülhamid was replaced by his apathetic and sickly half-brother Mehmed V and the real power fell into the hands of a triumvirate of parvenus and political adventurers, Talaat Bey, Enver and Cemal Pasha. Their original paranoia was intensified by two factors: the loss of the Ottoman provinces on the Balkan, when Russia and the West used the discrimination against its Christian population as a reason to interfere; and constant pressure on Turkey to guarantee equal rights to the Christian Armenian minority, as agreed in the Berlin treaty of 1876. Fearing another intervention, especially by Russia, the Young Turks regime soon used World War I to solve “the Armenian problem” in a different way: by eliminating the Armenians.

A campaign of extermination

On April 24, 1915, hundreds of Armenian intellectuals and leaders in Constantinople were arrested and deported to the interior of the country, and most of them were murdered afterwards. To justify their actions, the Ittihat government accused the Armenians of a conspiracy with Russia and the preparation of a revolt, although it was never able to present any evidence for this claim.

At this point, most male Armenians, who were already serving in the Turkish Army, were suddenly forced to do slave labour or were massacred. Beginning in May 1915, nearly the entire remaining Armenian population (of 2.1 million before the War) was deported, province by province, town by town, and village by village. On foot, with almost no bread and no water, old men, women, children and those Armenians who were wealthy enough to avoid military service, were sent to Der Zor in the Syrian desert. On those death marches, hundreds of thousands died of exhaustion, starvation or diseases. Those who survived those miserable condition were forced into concentration camps. They starved there or died from cholera, typhoid and dysentery during the following months. Others became victims of massacres or were sent even deeper into the desert where local tribesman slaughtered them.

By mid-June 1915, Msgr. Dolci learned about “rumors of massacres”, as he wrote in a telegraph to the Holy See[9]. About a week later he received confirmation that indeed a “persecution” with the purpose “to remove the element of the Christian Armenians from the entire province” took place.[10]

Among the victims were many Catholic Armenians. The Catholic bishop of Mardin, Msgr. Ignatius Maloyan (1869-1915), and several of his dignitaries were slaughtered after their deportation in mid-June. After learning the details of this massacre, Dolci sent a written protest to the Grand Vizier, requesting the immediate stop of those deadly deportations, at least of the Armenian Catholics.[11] He did not even receive a reply.

“Horrible atrocities are being committed by this government against innocent Armenians in the interior of this Empire. In some regions they get massacred, in others deported to unknown locations to die of starvation on the way. Mothers have sold their children to spare them a certain death. I work tirelessly to stop this barbarism”[12], Msgr. Dolci wrote to Cardinal Secretary of State Msgr. Gasparri on August 20, 1915.

After his original protest was ignored, he formed an “détente againt the persecution”[13] with the Austrian ambassador Janos Count Pallavicini, the German Consul General Heinrich Mordtmann and US Ambassador Henry Morgenthau. They approached the head of Sunni Islam in Turkey, the “Sheikh ül-Islam”, as well as Talaat Bey and Enver Pasha at a occasion of a Government reception on September 2.

Talaat Bey promised to telegraph his state governors an order “to respect (Armenian) Catholics and Protestants”[14]. Indeed, according to Mordtmann, he sent the telegrams, which he showed to Mordtmann – only to withdraw the orders the next day. Instead, Catholic Armenians were offered a chance to be spared if they converted to Islam; the others were allowed to pay a train ride to Konya from which they would continue their journey to Syria on foot.[15]

As the massacres continued, the Armenian Catholic Archbishop of Chalcedon, Msgr. Peter Kojunian, sent an emotional letter to Pope Benedict XV, stating that “a systematic extermination of the Armenians in Turkey”[16] was taking place. The Holy Father acted and sent a hand-written message to Sultan Mehmet V, appealing to his “high-hearted generosity” and requesting his compassion for the innocent Armenians.[17]

The Papal initiative was made public and reported by newspapers all over the world. At the same time, Secretary of State Cardinal Gasparri contacted the Papal Nuntios in Vienna and Munich, ordering them to promote the Holy See’s initiative with Turkey’s allies and urge them to interfere so that “these barbaric acts should immediately be stopped”[18]

At least the Nuntio in Munich, Msgr. Frühwirth, managed to win an influential Zentrum Member of the Reichstag, Matthias Erzberger, a devout Catholic, over to his side. Erzberger tried his best in Berlin, without success. At the same time in Constantinople, Msgr. Dolci desperately tried to get the Papal message to the Sultan but was refused several times by the Sublime Porte.

Only when the German ambassador interfered, was Dolci received by Mehmet V. This took place on October 23, 1915, after almost six weeks. A month later he was invited to pick up the Sultan’s reply, which justified the deportations with the claim of an Armenian conspiracy.[19]

Although US Ambassador Morgenthau and the Armenian Orthodox Patriarch Zaven I Der Yeghiayan  applauded the Papal initiative, it had failed. The foreign ambassadors, including Msgr. Dolci, were told about the end of the deportations only when in most provinces no Armenians were left. “There are new cases of deportations and massacres,”[20], the Apostolic Delegate reported to Rome by mid-December; indeed the speed of the Turkish action had only increased after the foreign interventions.

And although the Turks promised the return of the deportees “soon”, an order was given to massacre all inmates of the concentration camps in the Syrian desert. Only the Armenians of Constantinople were spared to demonstrate “good will” to the Turkish allies. In the end, the Armenian Catholics were those who suffered most; while about 25 percent of the Orthodox Armenians survived the genocide, only 13.3 percent of the Catholics did.[21]

Eventually even the German ambassador to Constantinople, Paul Graf Wolff Metternich, admitted in a letter to the Chancellor of the Reich, Theobald von Bethmann Hollweg: “The Turkish government was not deterred in its program to solve the Armenian question by the extermination of the Armenian race, neither by our initiatives nor by the initiatives of the American ambassador or the Papal delegate, nor by the threats of the Entente and at least by the public opinion in the West … they also got rid of the Catholic and Protestant Armenians, although the Sublime Porte gave its assurances that they would be spared.”[22]

This included even the public protest of Pope Benedict XV, who, in an allocution to the Consistory on December 6, 1915, explicitly mentioned “dum miserrima Armeniorum gens prope ad interitum adducitur”[23] “the unlucky people of the Armenians are nearly completely sent to extermination”. Furthermore, the influence of the Apostolic delegate in Constantinople was nearly nullified afterwards.

In a letter to Pacelli on December 14, 1915, Msgr. Dolci wrote: “By defending the Armenians, I lost the grace of Caesar, the Nero of this unlucky nation. I mean the Secretary of the Interior, Talaat Pascha, Grandmaster of the Masonic Orient. He must have learned of the great pressure which followed after the intervention of the Holy Father in form of his hand-written message from the other embassies. Since then, I have received only malevolent looks from him.”[24]

Is this the lesson Eugenio Pacelli learned from the Vatican’s reaction on the Armenian genocide, the “Holocaust before the Holocaust”, as Elie Wiesel, survivor of the Shoah and 1996 Nobel Peace Prize winner, has called it? Was it “don’t speak out, don’t launch a public protest, it will only lead to greater suffering and worsen the situation for the Catholics and converts”?

If this is the case, he would have followed the recommendation of US Ambassador Henry Morgenthau, who had warned his government in July 1915 of “a campaign of race extermination” in the Ottoman Empire and, at the same time, advised the US Secretary of State not to protest publicly:

“Deportations of and excesses against peaceful Armenians is (sic!) increasing and from harrowing reports of eye witnesses it appears that a campaign of race extermination is in progress under a pretext of reprisal against rebellion.

Protests as well as threats are unavailing and probably incite the Ottoman government to more drastic measures as they are determined to disclaim responsibility … and I believe nothing short of … force which obviously the United States is not in a position to exert would adequately meet the situation.”[25]

Indeed, the influence of Pacelli’s “Armenian experience” on his later reaction to the Shoah should not be underestimated.

Michael Hesemann is a German historian. This paper was delivered at an international conference in Rome on Pius XII in World War II, at the Universitá degli Studi Guglielmo Marconi in 2014. It has been republished with permission from Michael Hesemann’s website. His history of the Armenian genocide (Völkermord an den Armeniern) has just been published.