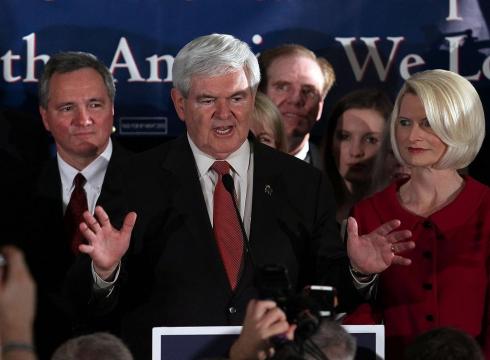 I remember writing in 2008 that the race was consistent only in its unpredicability. That’s the only resemblance this presidential race holds to the last.

There is no comfort in any political camp right now. They each feel equally emboldened and vulnerable. Just as they did in the Democratic primary in 2008.

That’s not bad for the political process after South Carolina, third race in.

Three states. Three winners. A divided delegate count. If there is one clarity in the unpredictable, captivating turns of the Republican presidential race, it is this: Anything can happen and Florida, which is next to vote, is wide open.

“Whether it’s a ball game or a political race, momentum counts. And Gingrich has it,” said state Sen. Mike Bennett, R-Bradenton, who is not affiliated with a candidate.

Gingrich’s resurrection comes as the GOP field has narrowed, allowing him to tap into conservative voters eager to settle on a candidate other than Mitt Romney, whom Gingrich has relentlessly pounded as a “moderate.”

Then again, Gingrich could squander it all, as he has before in the lead position. With nine days before primary day on Jan. 31, his surge will be met with negative ads and increased news media scrutiny.

And Ron Paul is prepared for the long slog.

“THIS is the beginning of a long, hard slog,” said Ron Paul, at his optimistically titled “Victory Party”. “This is a hard fight because there’s so much worth fighting for,” said Mitt Romney, “and we’ve still got a long way to go.” Indeed we do…

What happened in South Carolina? Erick Erickson writes that today’s result was “about Republican grassroots giving the Washington Establishment the finger. The base is angry, and right now only Newt is left to fight for them.” Mr Gingrich can hardly be considered a Washington outsider, having served in Congress for some 20 years, but if there is one thing the former speaker is good at, it’s fighting. His debate performances this week displayed not a mastery of the issues, or any particularly novel policy proposals, but anger. His speeches have portrayed the campaign as an epic battle between an exceptional American, himself, and an un-American president.

And it has tapped into the anger of the people joining Tea Party movements and Occupy movements and given them voice. How that will play in Florida is the next great unknown.

‘The great unknown’ is well put. The Florida primary is on January 31st. Political maneuvering asaide, the people have a say and want to express their values and priorities.

An awful lot can happen between now and then.

One thing I’m going to be watching for is the ‘electability issue’, with the observer status that the term has been applied equally to three different candidates in the Republican campaign, as if they’re each the only one electable against the sitting president.